You only get the one chance in your lifetime to watch the M's live at 3am for two consecutive nights in late March.  Let's not waste this opportunity.  Since they are so far ahead of us I actually already know how the game ends.  And because I am such a nice guy and most of you will be asleep like babies, here you go: 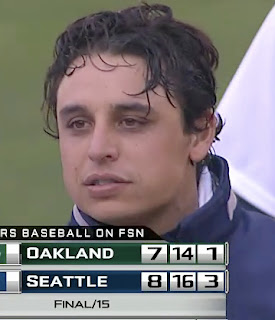 Looks like we are gonna be playing extras again!  And Pete will be able to catch a bit of it when his alarm goes of at 5:30
Posted by Fortune at 10:04 PM No comments: 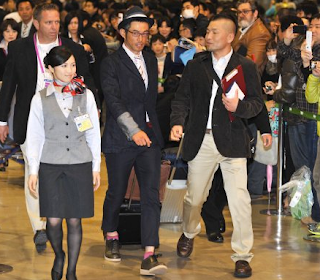 I dont know how Ichiro got his uniform, bat, and glove in that tiny suitcase, but my sources in Japan tell me that he will have everything he needs to play today.  In the more great news department: Your party hosts will be here all night and into the wee hours of the morning, and then some, to bring you all the action of this morning's game against the stupid A's.  Please feel free to join in on the fun!!!!!
Posted by Fortune at 9:22 PM 14 comments:

As the 2011/12 NFL season came to an end, the pre-draft buzz shifted from the Andrew Luck sweepstakes to an even more interesting storyline: the Kansas City Chiefs and the Seattle Seahawks finished in an unbreakable tie. This ensured that, regardless of the tiebreaking coin flip, the most random streak in professional sports would continue for a 4th straight year.

2009: the high picks didn’t/haven’t panned out (Tyson Jackson and Curry).
2010: the picks look like they’ll be fixture for both teams, but have had injury problems (Eric Berry and Okung).
2011: probably too early to tell (Carpenter and Jonathan Baldwin)

Who will be picked in 2012? That’s impossible to predict. One prediction I am confident in: the Chiefs will have the 31st pick in the 2013 draft. But enough about that, let’s get on to the predictions for 2012 in this year’s initial Mock Draft!

1. Indianapolis Colts – Andrew Luck, QB, Stanford
This would really fill a big need for the Colts. They just cut a QB and now they have the chance to take one in the draft. Some people say Andrew Luck is the best QB prospect to come along since John Elway. I’m really hoping Luck pulls an Elway here and tells the Colts he won’t play for them. How hilarious would that be? They cut Peyton Manning and then Luck just holds out and never signs.

2. St. Louis Rams – Robert Griffin III, QB, Baylor
It’s been pretty well covered at this point that the Rams will be trading this pick. Whoever comes up to this spot will be taking RG3. He’s a great athlete, but is actually a pretty solid QB too. My guess is that the Browns will be the ones to trade up here. The Redskins would be my 2nd bet.

4. Cleveland Browns – Justin Blackmon, WR, Oklahoma State
This is based on the assumption that the Rams will be picking here. Rams Rule #14: after any catch made by a Rams receiver yell “get down” to remind the player to drop to the turf immediately like back in the Holt & Bruce glory days.

5. Tampa Bay Buccaneers – Morris Claiborne, CB, LSU
Overshadowed a bit by the Honey Badger at LSU, but he’s just as good if not better. He just doesn’t have a cool nickname. Maybe we can give him one. Keeping in line with the nicknamed-after-an-internet-video theme, I suggest calling him Weather Dork (look it up).

7. Jacksonville Jaguars – Melvin Ingram, DE, South Carolina
They could use some help with the pass rush and I think Ingram will end up being the highest DE drafted.

8. Miami Dolphins – Dontari Poe, DT, Memphis
This guy is going to go way higher than he should because of how much buzz he generated at the Combine. He’s over 340lbs but ran a sub-5 40 and did 44 reps on the bench. He looked pretty good in all the drills, but I’m not sure why that would matter more than his actual game tape. I’d like to hear what people say between now and the draft. Personally, I didn’t watch a single Memphis game all year, so I can’t say this would definitely be a reach.

10. Buffalo Bills – Quinton Coples, DE, UNC
A favorite of Mustacheer Fortune, Coples has some questions about his motor and the consistency of his effort. Well, if playing for Chan Gailey in Buffalo doesn’t get you motivated I don’t know what will.

11. Kansas City Chiefs – Trent Richardson, RB, Alabama
I don’t really think he’ll go here, but I don’t see him lasting much longer than this. If he drops to #12, the Hawks should take him and just run on every single down with him and Beast Mode until the defense just quits, which should be about half way through the 3rd quarter (or 1st quarter if it’s the Rams).

12. Seattle Seahawks – Ryan Tannehill, QB, Texas A&M
I just put this pick here to piss myself off. I don’t think there’s any chance the Hawks take Tannehill. His team constantly blew leads and couldn’t win down the stretch. It happened multiple times last year and that has to be concerning to NFL teams, right?

So what should the Hawks do here? I think the biggest need is DE. The two top guys (Ingram and Coples) are off the board in this scenario. I’m a big fan of Whitney Mercilus from Illinois. He really only produced during his final season, so some are knocking him as a one-year wonder. He is probably a pass-rush only guy and might be a liability in run support. But let’s consider him the pick for now because it won’t make me angry like Tannehill. I’ll just ignore Tannehill for the rest of the first round too.

Another option would be Luke Kuechly (LB, Boston College). If the Heater isn’t resigned, then there will be a definite need at ILB and Kuechly seems like the type of guy who could be a starter from day 1.

19. Chicago Bears – Jonathan Martin, OT, Stanford
He is a big, huge dude that impressed people at the Combine. I don’t know what all the fuss is about. Looked to me like he’s way too much of a waist bender.

20. Tennessee Titans – Peter Konz, C, Wisconsin
When you have a chance to take Peter Konz, you take Peter Konz. I hope Tennessee has enough phone staff on hand to collect all of the season ticket orders that come in on Friday morning after this pick is made Thursday night.

21. Cincinnati Bengals – Cordy Glenn, G, Georgia
He is a big, huge dude that impressed people at the Combine. I don’t know what all the fuss is about. Looked to me like he’s way too much of a waist bender.

22. Cleveland Browns – Mike Adams, OT, Ohio State
This would be the Rams pick if the assumed trade goes through. So, good luck Mike Adams.

If this pick still belongs to the Browns, maybe they can take that goof Tannehill.

23. Detroit Lions – Janoris Jenkins, CB, North Alabama
He was thought of as a Top 10 pick before getting kicked out of Florida. He needs to convince people that his character issues are a thing of the past. His skill level looks to be pretty similar to when he was at UF. But whoever drafts him will also be drafting his inner demons.

26. Houston Texans – Stephen Hill, WR, Georgia Tech
Really flashed at the Combine. Ran a fast 40 and looked great in the drills. He comes from an option offense, so his skills weren’t on display in college nearly as much as other big time WR prospects. I think this will get him picked higher than Kendall Wright even though he probably shouldn’t.

29. Baltimore Ravens – Andre Branch, DE/OLB, Clemson
I have a feeling that one of the 2nd round rush LB will sneak into this spot. Not sure if it will be Branch, Vinny Curry (Marshall) or Chandler Jones (Syracuse; brother of Jon “Bones” Jones). I like Curry a bit more, but I think Branch will go higher.