With the Combine just days away I thought it would be a good time to post my first mock draft. You can put these in stone. This is exactly how the first round will unfold.

1. Carolina – Nick Fairley, DT, Auburn
This guy’s a beast. They’d much rather have the chance to draft Andrew Luck, but Fairley will be a good addition to the defense. And the good news for the Panthers is that they’ll still suck, so they might be able to get Luck next year.

2. Denver – Da’Quan Bowers, DE, Clemson
The Broncos only won 4 games last year, but 2 of those wins came against playoff teams. I didn’t get an actual quote from Mark, but I’m assuming that he thinks the Broncos are much better than their 4-12 record. Well their pass rush resembled a 4-12 team, so they should address that with this pick (unless they plan on having Tebow play both ways this year, which I’m sure he could do).

3. Buffalo – Cam Newton, QB, Auburn
He wins everywhere he goes. His track record would really be put to the test. The Bills would probably be better off going with a defensive playmaker like Patrick Peterson or Von Miller, but they might try to grab Newton thinking he can be their franchise QB.

4. Cincinnati – A.J. Green, WR, Georgia
He’d looked awesome in all of the games I watched him in this year. The Bengals should jump at the chance to take a WR early in the hopes that it’ll inflate his ego and he can one day create a unique persona that lands him a shitty reality TV show called “Green with Envy” (although I hope the show centers on his odd-couple relationship with the Eagles’ kicker and it’s called Green/Akers).

5. Arizona – Blaine Gabbert, QB, Missouri
I can only hope that this pick happens. I think Gabbert’s going to bust. It would set the team back another couple of years and let their existing young talent get fed up and jump ship. Instead they’ll probably pick-up a decent veteran QB and draft Von Miller.

6. Cleveland – Von Miller, OLB, Texas A&M
It looks like Cleveland is switching from the 3-4 to the 4-3, so it could use some versatile talent on that side of the ball. Miller’s stock is rising pretty quickly, so it’s likely that he’ll go top 5.

8. Tennessee – Robert Quinn, DE, UNC
This will be an interesting player to watch. He was suspended for the whole season. He’ll need to show that he’s still in good shape and can play at the level he did last season. Mike Mayock and Michael Lombardi think this guy is going to blow up the combine and jump up a bit in the draft.

10. Washington – Cameron Jordan, DE, Cal
Jordan’s stock is on the rise and he could go this high based on teams’ needs for a 3-4 DE which is probably where he will play. He looked good in Senior Bowl practice and improved his stock, but I wasn’t too impressed with some of the games I watched him in.

11. Houston – Prince Amukamara, CB, Nebraska
A great talent that has been overshadowed by Patrick Peterson. This would be the perfect scenario for the Texans.

14. St. Louis – Julio Jones, WR, Alabama
Hopefully this pick doesn’t happen. My hope is that by this point in the draft their front office assumes the NFL skipped them this year since they’ve never knew the first round to last this long.

19. New York Giants – Anthony Castonzo, OT, BC
Keith, do you have any input on this pick? I just went with the best rated BC player since they probably fooled around with Coughlin’s daughter.

23. Philadelphia – Jimmy Smith, CB, Colorado
I need to apologize to Sinclair on this one. There’s a lot of buzz about Smith right now and he might be climbing up the draft boards. He’s not on the same level as Peterson or Amukamara, but it looks like he’ll end up as the #3 CB.

24. New Orleans – Adrian Clayborn, DE, Iowa
I don’t like this guy much. He just seems really boring to me. He didn’t seem to stand out much in any of the Iowa games I watched.

25. Seattle – Mike Pouncey, G/C, Florida
I think this pick would make the most sense. It could provide a little more quality on the line which is definitely needed. There would be a lot of interesting options if the draft played out this way. Locker would still be on the board. Justin Houston (DE/OLB, Georgia) would be a nice addition to the pass rush. Or they could go with a playmaker on offense like Titus Young (WR, Boise St). If Gabe Carimi slips to this spot he could be a good pick since it looks like he would be a better fit at RT.

Anyone care to "weigh" in? HAHAHAHAHAH!

I heard Mr. Red is looking lean and mean.

Make sure your Mustacheer memberships are up to date. Some exciting stuff coming down the road. Must be a Mustacheer by 3/1 to participate. Spread the word my dirty minions.
Posted by Mr. F at 6:27 PM 4 comments: Links to this post

Email ThisBlogThis!Share to TwitterShare to FacebookShare to Pinterest
Labels: Mustacheers

Better post something quick before i burn in hell.

Speaking of hell... I watched some NBA "entertainment" this weekend. More specifically, the Dunk Contest. It was fun, I'll admit, but something bothered me. And one of the contestants hit the nail on the head:

DeMar DeRozan, if I still watched the NBA, I would root for you.

Carmelo Anthony on the other hand is a spoiled little bizitch.

Is it baseball season yet?!?!

I think pitchers and catchers (settle down Bateman) report soon, and if you're not fired up yet... well, check this out: One of the legendary scenes from Major League where Lou Brown may or may not have cut Rick Vaughn (I don't want to spoil anything for you, just watch). Only in this case Mr. Charlie Sheen has been replaced by your friendly neighborhood Spiderman. I know. It makes sense. Enjoy:

Email ThisBlogThis!Share to TwitterShare to FacebookShare to Pinterest
Labels: Baseball, Major League, Spiderman, What the fuck

The One True King

Buster Olney has a new video blog up on some other sports news site. 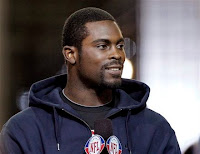 But I do know if somebody else is doing it, it's probably cool. SO... I'd like to invite Ronny Mexico himself to come by and post of this site whenever he likes!

Looks like the head manager of the underwater basketball team is one hell of a deep threat. Here is video of him breaking the record:


The mens squad could have used a little bit of that last night
Posted by Fortune at 3:16 PM 1 comment: Links to this post