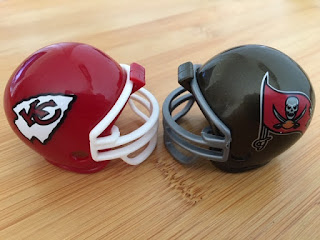 The Super Bowl is upon us and we have a quarterback match-up for the ages. In fact, it could end up going down as the greatest in the history of the big game, topping other classic duels such as Marino/Montana (XIX), Favre/Elway (XXXII), and Collins/Dilfer (XXXV). Yes one day you’ll be able tell your grandkids that you saw Mahomes vs. Brady in the Super Bowl. They’ll say, “But what is football grand papa? Is that the sport you all used to watch before the Morlocks invaded?” “Yes,” you’ll respond, “But quiet Jeremiah, lest they hear you.” Much has been made of Tom Brady joining a new team and immediately taking them to the Super Bowl. While I agree that it’s a remarkable story, I also think that it was just Tampa’s turn. The Bucs are now the 12th NFC team in the last 15 seasons to make it to the Super Bowl. Pretty astonishing. The whole conference is basically just a restaurant that doesn’t take reservations. Yeah it’s crowded and kind of chaotic, but if you wait around long enough and get lucky you’ll get to take your seat eventually. Though it seems like Washington, Dallas, Detroit, and Minnesota have been too busy looking at the menu or trying to order drinks at the bar to notice when a table has opened up. The AFC, on the other hand is a much more exclusive scene. Over that same 15 year span only 6 different teams from the conference have reached the Super Bowl. (In fact it’s still only 6 even if you push it to 18 years, but let’s stick with 15 for continuity sake. Though, I just told you the other stat, so I’m really trying to play both sides I guess. How about we just keep this between you and me? The people outside the parenthesis don’t need to know about the shit I’m trying to pull in here.) The Chiefs returning to the title game only reaffirms the AFC’s recent history of dominant franchises. And while KC hasn't been consistently dominant for a couple months now, they’ve only lost once in the last 26 games Patrick Mahomes has played. And as far as I know he’ll be active this Sunday, so it wouldn’t make much sense to pick against the Chiefs. And I won’t.

But I know you don't come here just to hear what I think. Let's toss it to Cris Collinsworth for his insight on the big game.

A fitting end to a truly incredible season. See you all in seven months.