Well this is nothing short of devastating. 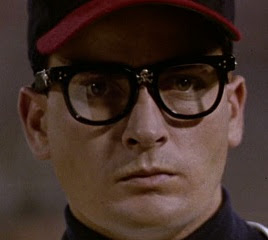 Turns out the Wild Thing couldn't hit 103 on the gun (probably not even 101) with out a little extra boost. Read this if you can.

I can't think of any athletes that would have upset me more (other than Kirby or Gar) if I found out they were juiced up.

Klay Thompson and the NBA Draft

Thinking about watching the NBA draft tonight to see where Klay Thompson, WSU's best player of all time, ends up.

I've had mixed feelings about Klay leaving early ever since he made the decision. Ive always thought a college athlete should leave if he's gonna be a first rounder... but that was before a Coug could potentially leave early. Hypocrisy. Trust me Mustacheers... No one was or is more shocked than me.

Anyway... decisions need to be made here.

First with Klay. Do I:

A) continue to root for him

B) shun him for leaving the Cougs

Since I'm so evolved, I'm gonna go with A!

Now... how far do I go in my continuation of rooting for good ol' Klay Thompson:

B) check in now and again

C) root for his new team no matter what

D) root for his new team... if they're fun to root for


I'm leaning towards E. But I'll bet it ends up being between A and B. However... if there ever was a chance of me watching the NBA again and it didn't involve a team in Seattle... it'd have to be following a Coug (assuming either of the Fortune brothers never try and turn pro) after he made the leap... and I'd say Klay is the most realistic chance of a Coug making a decent impact on an NBA team. So I guess... I'm leaving the door open for the possibility of D.

Hopefully the Cavs draft him.

In the midst of one of the more depressing Coug Hoops runs in recent memory... one shining... moment? No. But a recruit.

I don't know a thing about him but of he was good enough to be recruited by Bill Self then I already love the guy!

I can't make comments from my iPhone unless I'm logged in through disqus. Forget it.

- Posted using BlogPress from my iPhone

I'm doing it. With a little baseball thrown in.

Thinking about actually watching the game tonight. Not sure what's happening to me.