Hello. It's good to see you (all?) again. I trust that everybody's rested and ready for another long season of puns, retread goofs, and picks that you can trust just over 60% of the time. There hasn't been a game that mattered since January 13th, at which point I was acting a lot like this kid, until I'm pretty sure I blacked out, because I don't seem to remember the very end of the it.


The point is that we haven't had football in quite a while, so let's shake off the rust by giving out a few awards for the offseason:

WINNER: "Just an Adonis. A great physical specimen of a man. Our creator created a beautiful man."

- Jim Harbaugh, describing a discus thrower that the 49ers signed to play football.

Best potential nickname based on a TNT show:

WINNER: The Packers drafted running backs Jonathan Franklin and Eddie Lacy back in April. With Lacy being a more bruising, power back, I hereby submit that this duo should be known as Franklin & Bash.

RUNNER UP: I've heard that the Houston Texans offensive line refers to themselves as Leverage. 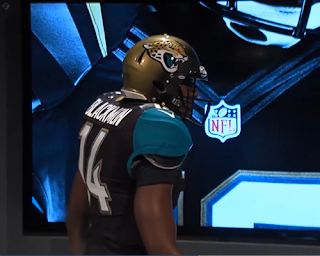 WINNER: The Jaguars new uniforms. It's not just the two-tone helmets, the jerseys and pants are awful as well. It looks like someone was trying out "Create-A-Uniform" on Madden and got way too far down the rabbit hole with all of the new features. However, on Madden you can simply realize the mistakes you've made and just choose not to save; as for the Jags, they have to reap what they've sewn. Well, they didn't actually sew them, I'm sure they have someone else who does that, but you get what I mean, right?

And now here's how every team will finish, so if you fall asleep for the next four months and miss the whole season don't worry, you'll already know what's going to happen.


If you ask me, the AFC is the much weaker conference this season. Though if you ask Karl Marx he'd say both the conferences are equal. So really, who's to say? As you can see I'm envisioning a fall from grace for the Super Bowl champion Ravens, who i predict to finish behind the SURPRISE! Cleveland Browns. The Colts scored 30 points less than their opponents last season and managed to go 11-5. Well not this time scumbags! They'll fall back to the pack. The "pack" like the Packers? You just said with a stupid look on your face. No, not the Packers, they'll stay at 11-5. The Saints will rebound to make the playoffs now that they aren't starting the season with a double interim coach. As for the Hawks, well you must have never read anything I've written before. If that's the case, consider yourself lucky and get out now, but for those of you who I've already got my hooks into, let's take a look at how the playoffs will shake out:


We did it! Or rather, we're going to do it. Can't wait gang. Seriously, it's going to be pretty great.

My eyes were open my eyes wre wide open

I seriously thought this site shut down. The future is bright!