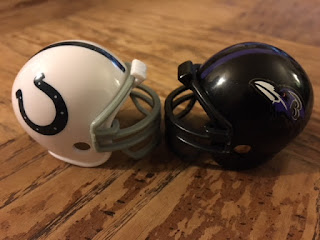 The Ravens are one of three AFC wild card contenders entering the week at 8-6, but when it comes to the playoffs they currently find themselves as the only one the group on the outside looking in. I kind of feel sorry for them, but if we’re being real it’s starting to freak out the other teams. I mean the Ravens are just sitting out there looking in on them. I get it Baltimore, you guys want to be in the playoffs, but right now you’re not allowed in. There may be an opening for you soon, but until that time we’re just going to have to request that you leave the property. Check back with us in a few days though because the Bills are playing the Pats. 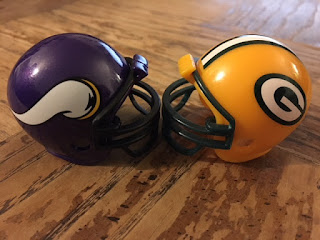 After returning for one futile effort Aaron Rodgers has been placed on IR and will miss the final two games of the season. It’s a shrewd maneuver by the Packers, and probably the correct one to make now that the team has officially been eliminated from playoff contention. It’s also kind of a middle finger to the rest of their star players who do have to play the final two games. Go get ‘em guys! If I were Clay Matthews I’d get myself injured on purpose just to prove a point. Hmm, actually that might be proving the organization’s point for them. Either way it’s a win for me, because it results in Clay Matthews looking like an even bigger idiot than he already is. 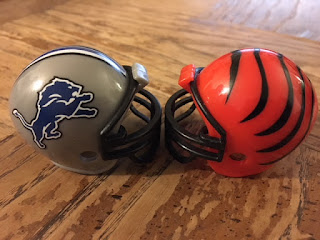 With two weeks left in the season the Lions have a legit (even if not very likely) shot to be the only NFC team from 2016 to return to the playoffs, which has to make one stop and say ... huh?!? If you had told me that before the season I would have been pretty surprised, but if you had told me that two weeks ago I would’ve slapped you in the face and called you a gd liar. The advantage that Detroit has is the softness of their schedule. A slate so soft it’s like they're walking on a cloud. Though here’s a little-known fact, if you actually tried to walk on a cloud you’d fall right through, clouds aren't solid at all! So perhaps these cloudy games could turn out to be a tantalizing mirage for Detroit. However, the Bengals’ past two games have been 33-7 and 34-7 losses to NFC North opponents, so a third such match-up isn’t a beacon of hope for Cincinnati. Then again, sometimes it can be hard to see a beacon through the ... clouds. (Did that even work?) 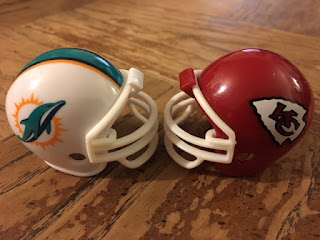 After plummeting from 5-0 to 6-6 the Chiefs awoke from their slumber just in time for their biggest divisional games of the season, back-to-back home wins over the Raiders and Chargers that now leave KC with a magic number of 1. Meanwhile the Dolphins followed up their inspiring win over New England with a flat performance in Buffalo that was such a stinker it left them with a magic number of 2. That’s not mathematically accurate, but it was a decent enough poop joke that I couldn’t just leave it floating. If Miami couldn’t squeeze out a win in Buffalo I don’t see them dumping on the Chiefs in KC. Look for the Dolphins to be flushed with little resistance (i.e. no plunger necessary). 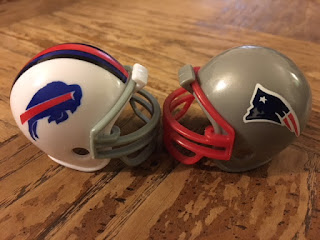 On Wednesday the Patriots reduced the team privileges of Tom Brady’s personal trainer, friend, and business partner. Some may argue this is simply a case of Bill Belichick and the Patriots reestablishing their authority. However, others posit that the organization is distancing themselves from a man that’s clearly supplying Tom Brady with some sort of untraceable PEDs. Of course, to believe this harebrained theory you must suspend your disbelief to the point that you’d accept that Tom Brady could possibly a cheater. So in other words, that’s definitely what’s happening. After this whole thing is litigated the NFL will suspend Brady for the 2022 season. But until then New England should keep rolling! 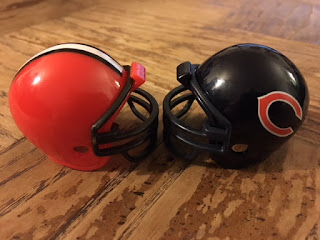 These teams enter this matchup with a combined record of 4-24. If you’re familiar at all with the Browns organization you’ve most likely deduced that the Bears must be 4-10. Right you are! It was on this day one year ago that the Cleveland won their last game ... and more than two years since they had a win before that. There was a strange, even mystical, point in the 2014 season at which the Browns were 7-4; since then they’ve gone 4-47. Look, I like to poke as much fun at the Browns as the next guy ... Ok, probably even more so than the next guy ... Though I guess it would depend on who the next guy was ... Forget it! My point is that for as fun, and easy, as it is to clown on the Browns, 4-47 is just depressing. Wouldn’t it be nice this Christmas Eve to see that number improve to 5-47? I think so too. Unfortunately this is the Browns we’re talking about, so they’ll probably manage to lose twice in one day. 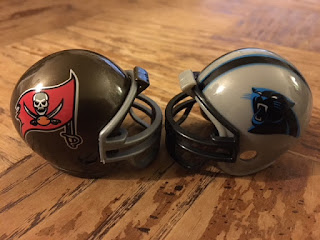 It’s this time of the season in which a team that’s out of the playoff race can pop up on a more successful team’s schedule and spoil their playoff hopes. Over the last four weeks these Bucs have had just such opportunities and spoiled absolutely nothing. They have a couple more chances over the final two weeks of the season starting with this game against Carolina, but the Panthers really shouldn’t be concerned. The Bucs are like a nice Tupperware container, nothing is getting spoiled on their watch. 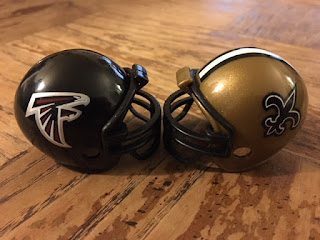 Prior to the first meeting between these teams a couple weeks ago the Falcons were 7-5 but knew that based on their schedule if they could win out they would win the NFC South. And guess what, they’ve won both games since. Just imagine if they had adopted that mindset from the beginning of the year! Folks, we’d be looking at the possibility of an undefeated season right now. As it is, Atlanta still trails New Orleans by a game and faces their toughest test since they began their torrid march towards divisional ownership. I like the Saints to eke out a win here, despite the fact the Falcons’ awareness of this game’s magnitude. 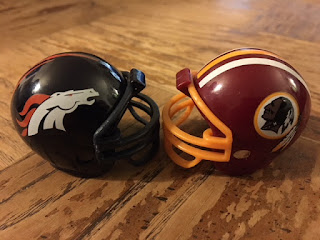 To me the most interesting part of this contest will be the pregame warmups. And not just because I love watching guys stretch. I’m curious to see if there’s any interaction between Broncos general manager John Elway and embattled Washington franchisee Kirk Cousins. Clearly Denver could use a quarterback next season, and there’s a good chance that Cousins will need somewhere besides DC to play. Now, would an on-field convo qualify as tampering and violate league rules? Probably. But Elway never cared much for rules in his playing days, this guy would regularly throw after crossing the line of scrimmage. Sure he was penalized each and every time, as he was for every other infraction he ever committed, but who cares? What’s the worst that could happen? Oh right, serious consequences. You’d think he would have learned his lesson by now. 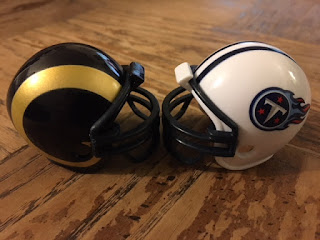 Last week I pointed out that the Titans had a serious chance to lose out, and miss the playoffs. They haven’t proven me wrong yet. And even though their final two games are at home they’re going up against teams with a combined road record of 10-3. But shouldn’t we have known all along that Tennessee was pulling the wool over our eyes? I mean their coach’s name is Mularkey for God’s sake! His name might as well have been Mike Notasgoodasourredordindicates. Or Mike Actuallyprettymediocre. Or Mike Secretlylousy. I’m serious, that’s what his name should have been. Take your pick. The Titans’ march toward .500 continues this week. 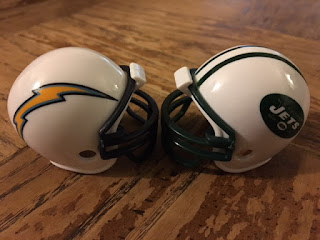 Ah the match-up of the two forgotten children of their respective cities. This game will be the equivalent of the two youngest cousins branching off during Christmas dinner to play with their new toys and talk about what jerks their older siblings are. Then at one point the Jets will ask if the Chargers if they want to come back over next week too, but the Chargers will tell them that no they can’t because, well, see, they’re still trying to make the playoffs. And then as they watch the Chargers get on their team bus and head back to LA the Jets will realize that they were never really the same ... not at all. Then a Giants fan will hit them with a snowball. 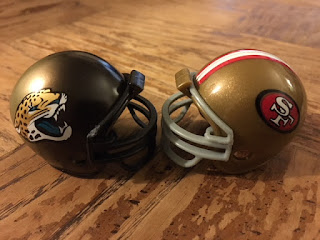 With only two weeks remaining in the regular season there’s still an outside chance that the Jaguars could end up as the #1 seed in the AFC ... I’ve spent the last 10 minutes to an hour staring into space and wondering how we got here. And when I say space, I mean space. Like I closed my eyes and entered some sort of wormhole. I saw all the possible permutations of the 2017 NFL season, it was simultaneously glorious and frightening. I can honestly say that it changed me in a very real, yet not totally tangible way. Anyhow, in none of those alternate timelines that flashed in front of me did the Jacksonville Jaguars secure the top seed in the AFC. So, as obtainable as it may seem at the moment, I can say with confidence that it won’t happen. 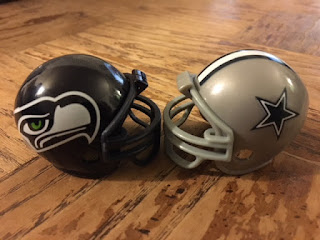 It’s an elimination game in the NFC; lose and you’ll be spending the postseason at home, win and then win again next week aaaand you still might not make the playoffs. But hey, the loser here is definitely out. With Ezekiel Elliott returning from suspension and the Seahawks coming off their worst loss in years, the Cowboys would certainly seem to have the edge. But the Hawks have something else going for them, and that’s that I’m writing this post. 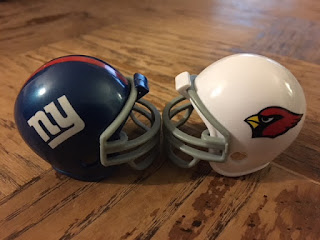 With a 2-12 record, the Giants currently possess the #2 pick in the draft, with the Browns being #1. Both teams will likely be in the market for a quarterback come April. This begs the question, presented with a scenario in which they could go to Cleveland at #1 or New York at #2 will the top QB prospects tank their performances at the combine or their pro day to avoid being drafted by the Browns? It’s nefarious, but probably the right move. That is, if you prefer playing in a market that comes with an insane amount of pressure to a market that would be grateful if you won 5 games as a rookie ... On second thought these young studs gotta let it rip baby! Book me on that one way flight to the Cleve! 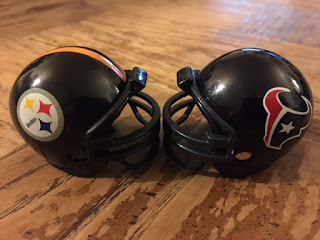 It's a Christmas Day special from the folks at Sunday Night Football, which means that our old pal Cris Collinsworth will be in the booth to lend his analysis to this match-up. Let's see what he has to say ahead of this clash in yet another HCM exclusive: 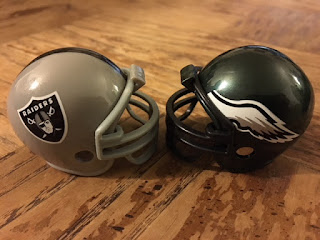 It's Christmas night, which means most of us will either be napping or full-blown asleep with our favorite present tucked under our arm. Those of us who are still awake will most likely be too drunk to really focus on this game. Speaking of being blitzed out your mind, look for the Raiders to bring added pressure in an attempt to fluster Nick Foles in his second start of the season. I'll be honest, I'm not sure if that will be their gameplan, but it worked well with the previous sentence, so let's just stick with it. Regardless, I think Philly gets the win at home and moves closer to home-field advantage throughout the playoffs. Also during the game their fans will murder Santa.