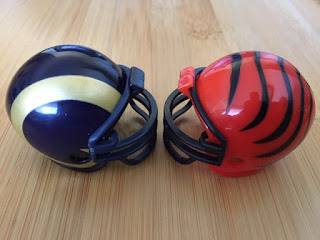 If you’re anything like me you’ve simulated hundreds of NFL seasons on video games like Tecmo Super Bowl and Madden. And if you’re not like me then you probably used your free time on more noble endeavors, like reading, or practicing a craft, or almost anything. But the point is, every so often one of those simulations would wind up with a couple randos like the Rams and Bengals in the Super Bowl. I’d let out a hearty guffaw at the shear absurdity of it, then turn to the person next to me, realize no one else was in the room, and proceed to simulate another season, one where chaos might not reign so wildly. But now here we are, one of those preposterous permutations has become reality. It does make some sense though. This season was devoid of a truly dominant team, so it stands to reason that we’d end up with the first ever Super Bowl match-up be between two seeds that are both below #3. They also have a combined 12 losses, the most in Super Bowl history. Yes they played more regular season games than past teams, but their combined .647 winning percentage is also the worst ever. What’s worse, the best they can do in this game is a combined .500! Rough. Though, when you consider that these teams are 1-5 overall in the Super Bowl that’s actually not too bad. My first instinct is to pick the Rams because of a potentially huge advantage from their defensive line. And also because for the entirety of the playoffs the Bengals have seemed like a polite, yet pretty hungry person waiting to see who’s going to take the last piece. In all three of their games they’ve given their opponents ample opportunity to take the win. But in the end they’ve said something to the effect of, “I mean if nobody else wants this, we’ll eat it. Last call ... Any takers ...? Alright ... Just gonna grab it if no one says anything ... Speak now or I’ll forever hold THIS piece ... Oh come on, that was pretty good. Anyway, we’re eating this now.” Can they ride that same M.O. to another victory and a world championship? Again, my first instinct would be no. But when you look at the Rams’ playoff performances thus far, they could be playing right into Cincinnati’s hands. In their first 6 and half quarters of the postseason LA outscored their opponents 61-14. In the 5 and a half since they’ve been outscored 23-41. If that trend plays itself out over the course of this game, it could be exactly how the Bengals like it: just wait around long enough for the opponent to make a mistake/get bored/realize they’re not that great, and pounce. And by “pounce” I mean sneak away with a victory. So, take it from me, the guy who’s picked 2 of the last 7 Super Bowls correctly, when all is said and done, the Cincinnati Bengals will be world champions. Then I’ll chuckle, shake my head, and hit reset.

Lastly, I'd be remiss if I didn't check in with the man who will be calling the game for NBC, and just happens to be a Bengals' hall of famer (or at least I'm guessing so, I haven't actually verified that). Cris Collinsworth, take it away: