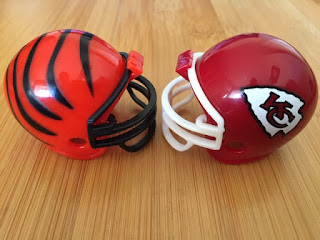 After making it through a harrowing divisional round all four of the remaining teams are like horror movie survivors returning for the sequel. Weathered vets who now sleep with one eye open. Though in this comparison the Chiefs are probably more like the slasher because they refuse to die. Even when they've definitely done for and there's only :13 left. They’re also picking AFC teams off one by one. This will be the eighth different conference foe KC has played in the postseason in the Mahomes era. Will they mow their way through every single one? Or can the Bengals be the final girl? Hmm, it would be rare for a red head to fill that role, so I tend to doubt it. Though, maybe it’s foolish to pick this important of a game based on a team’s color scheme and it’s relation to a strained analogy. Cincy did prove they could beat the Chiefs when these squads met in Week 17, but if anything, I think that makes it more likely that KC will win this time since the Bengals won’t be catching them off guard. You might be wondering, is there any team that could catch someone off guard in the AFC Championship game? I mean there’s a trip to the Super Bowl on the line, you’d think everybody would be fully prepared. Well sure, but what if the Utah Jazz showed up? Wouldn’t that catch everybody off guard? They’re not even a football team, so I’d have to imagine that would be a shock. And good luck catching the Jazz’s off guard. Donovan Mitchell is a tough match-up regardless of the sport. But again, that likely won’t be the case, and the Chiefs should be fully prepared for the Bengals. 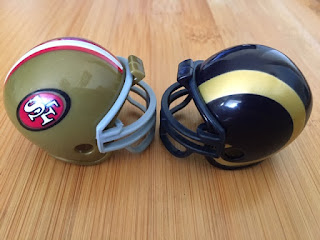 The Rams have the rare distinction of hosting a conference championship game as a number 4 seed. The last time that happened was January of 2009 when the Cardinals beat the Eagles in Arizona. In fact, that’s the only such instance in the 32 seasons since the league expanded the playoffs to six teams per conference. So LA is certainly not the Super Bowl shoo-in that a home team might normally be at this juncture. To make matters more difficult they’ve lost to the 49ers six straight times. And that includes twice last season when San Francisco only won 6 games overall. It’s safe to say that the Niners seem to have the Rams number. But it’s also safe to say that the idea of Jimmy Garoppolo being a Super Bowl starting quarterback twice in a 3 year span is so hard to wrap my head around that the primal urge to pick against it is the most powerful guiding force I have in regards to this game. With that in mind ...

And finally, even though he won't be in the booth for either of these games, I have to imagine Cris Collinsworth will be able to provide insight into these title games. Let's check-in with him now:

Well, guess I was wrong about the insight. See ya in two weeks!