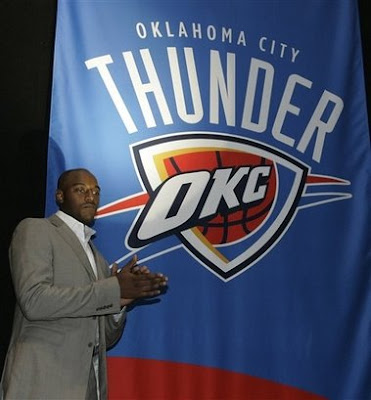 Great logo. My only complaint: not generic enough.

Did they find this template on NBA Live '08's Create-a-team mode?

Good. Fuck 'em. Just one step closer to this thing going down in flames.

Almost perfect analysis. But it's more like NBA Live '02.

And while I'm on it, what's with the off-centered OKC and basketball. This thing looks stupid as hell.

Fuck them in their fucking asses.

THe best part is all the time they took. HAHAHAHAHA! IF they had to rush it out for a season in like a week? Even then it's lame. Good job Bennett! Take some time out of your day (stop licking Stern's rim) to see about hiring some creative team that isn't functionally retarded.

I think they figured that if we're going to keep our WNBA then they're going to do everything in their power to make their NBA team appear as a WNBA team.