Why Isn't there a College Bowl Game tonight?

For those of you worried that you might be forced to play with your kids or talk to your wife tonight, I have some exciting news.  There is some worthwhile football on tonight.  Kicking off at 4:30 down at Tropicana Field is the 2012 Under Armour All-America Game.  Not as much news surrounding how upset many players were about not getting to wear a particular number (Unlike that joke of a U.S Army All-American Bowl).

There is one player that everyone should focus on tonight.  He is an undecided 3-star WR out of Dr. Phillips High School in Orlando, Fl.  A 6' 2" 184 pound burner.  He will be wearing the highly coveted #3 for Team White tonight.  He has narrowed his decision to Michigan State, Iowa State, and Washington State.  Go State Schools!  You can expect him to be unsuccessfully covered up by #3 on Team Black, Deion Sanders Jr.

You are probably asking, why the hell should I care about some shitty 3 star WR who can't be that great if he is considering WSU.  First off, screw you.  I don't know if you heard but we just got a new football coach who is kind of a big deal.  Many people refer to him as "Leachscobar".  Here is why you should care: 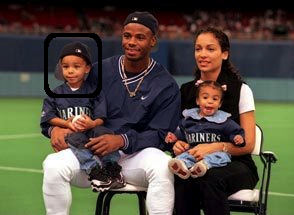 **I went ahead and put a circle around the kid I was talking about so you didn't think we had a Brandon Wheedon situation in the Palouse next year.


I really hope it is a high scoring game so the kids can practice getting flagged for taunting/excessive celebration.
Posted by Fortune at 3:30 PM

I know many of you have been sitting on pins and needles waiting for an update.

I hated Rich Rodriguez when he would buy software from me, and I think I hate him even more now.

Apparently hot chicks and sunshine can be very persuasive.