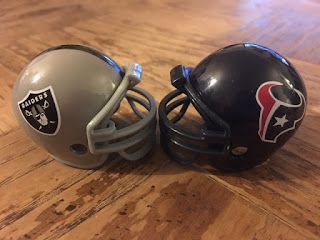 As I suggested might happen last week, our time travelers Trevor Finch and Clem Zarkins 8 (if you don't know what I'm talking about here's a link to their full saga) worked together to remove Texans quarterback Tom Savage from the equation by replacing the padding in his helmet with metal plates. Savage actually caught them in the act and told them that they shouldn't be doing it because it wasn't safe. Finch scoffed, "You don't sound very savage to me." Savage frowned, defiantly exclaimed "Gimme that!" and ran out to the field. He later left the game with a concussion, and as a result Brock Osweiler is once again the starting quarterback. But now the temporary alliance between Trevor Finch and Clem Zarkins 8 has dissolved and the fate of the Texans, and perhaps all of us, hangs in the balance. If I had to guess at what sort of mayhem ensues at Reliant Stadium on Saturday I'd say that CZ8 snatches Finch sometime in the 2nd quarter, allowing Osweiler to operate freely. When CZ8 sees the resulting terrible play he'll be emotionally devastated, letting his guard down just enough to allow Finch to escape. On the field Osweiler's putrid performance will be topped only by that of the other "starting" quarterback Connor Cook, a man who, in the past, has been unfavorably compared to Bo Callahan from Draft Day. If your best comp is a fictional character whose 21st birthday went unattended by any of his teammates, you've got serious problems. Consequently, I think the Texans move on, along with our TIMELESS tale.
Texans 16-12
Detroit @ Seattle 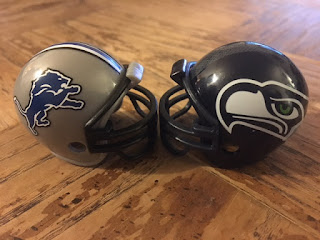 When a team gets to the playoffs you'd expect them to be very good in at least one area of the game. The Lions, however, rank no higher than 18th in passing offense, rushing offense, pass D, or run D. They're slightly below average across the board. It's like if Milhouse made the playoffs. So how did they get here? A little bit of grit, a dash of moxie, and a whole lot of timely, if improbable, play in the 4th quarter. Will they be able to once again overcome their middling statistics and pull off an upset against a depleted, inconsistent Seahawks team? I mean, I doubt it, but let's see what Cris Collinsworth has to say anyway:
Surprisingly almost on topic this week. Thanks CriColl!Seahawks 26-16
Sunday Miami @ Pittsburgh 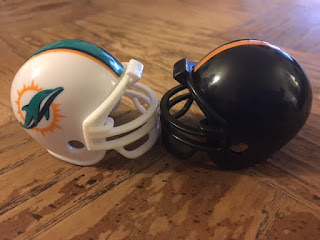 Way back in week 6 the Dolphins beat the Steelers 30-15. But that was October 16th, and things we're much different then. For instance, we thought the Vikings were a Super Bowl contender, Americans were doing a new dance called the "wacky waddle," and we'd all just been introduced to the world's favorite alien: ET (who would eventually be supplanted by ALF for the top spot). My point is, we've come a long way, and so have both of these teams. I mean the first game was played in Miami; this one will be played in Pittsburgh. See? That's a pretty long way, especially if you're trying to wacky waddle from one city to the other (I DON'T recommend that by the way, your pelvis would most likely never recover). There's no way that Ben Roethlisberger will get confused during this game because he played at Miami (Ohio) in college, right? Actually, it's not unfathomable. If so he may get off too a shaky start that makes this one a bit closer than most may expect.Steelers 27-23
New York Giants @ Green Bay 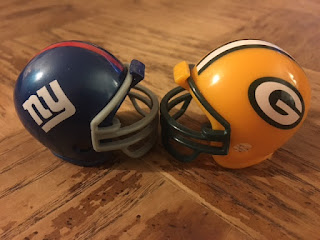 It's the game everybody's looking forward to this weekend. Except those of you with the rare condition known as Profile Neck, in which a person's head is permanently looking to the side. It's a rare condition that affects one person in the US. His name is Scotty "Crabman" Stanton, and ironically that's his nickname because he really enjoys eating crab, not because he has to walk sideways everywhere. At least that's what his friends tell him, but hey, at least he has friends, that seems like a win for a guy who constantly looks like he's posing for a school picture. The Giants have shown that they have a playoff ready defense, but Aaron Rodgers has been nearly flawless down the stretch. So who will prevail? It's anybody's guess, which is what makes this the game that everybody will be watching, including Crabman; his chair will have to be parallel to the TV, but that's not the point.Packers 24-17