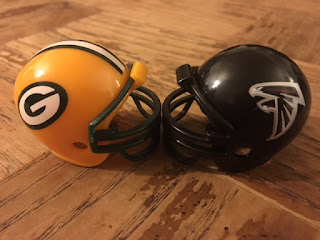 Well, it's that time again, Conference Championship weekend, and I feel pretty much the same as I did last year. So let's look at another excerpt from my TV pilot script Rogue Blogger:

Derek Henderson sits calmly while chained to a metal chair. Big Johnny Stromboli paces ominously in front of him.

You just had to keep making accurate picks didn't you? I
offered you millions to come work for me, but you spurned
my every attempt. It wasn't about the money, you said, You
had to have your creative freedom! Had to be a hero! I know
you never actually said that last part, it would be out of character
for you to boast about your own unassailable convictions
when there are real heroes like the troops out there, but you get
the point. And now you want to correctly pick the exact score of
the Super Bowl for the 8th year in a row. Well I'm sorry Mr.
Henderson, I'm afraid I just can't let you ...

He finally turns around to see that the Derek has freed himself from his shackles.

STROMBOLI
How did you free yourself? I used three super strength
padlocks!

The unlocked locks clang to the ground as Derek casually let's them fall from his hand.

DEREK
Games aren't the only thing I know how to pick.

Stromboli, reaches for his gun. It's not there.

Derek, pulls it out from behind his back.

STROMBOLI
But how did you ...?

DEREK
What can I say? I'm unpredictable.

Points the gun at Stromboli.

DEREK
Against the spread? Ok, then put your arms straight up.

Even the Stromboli has to smile at that one. 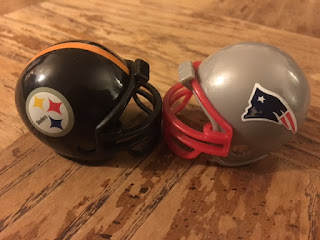 Another season and another appearance by the Patriots in an AFC title game. This is their 6th in a row and 11th in the Brady/Belichick era. Heck, Brady's played more January games in Boston than Ted Williams and Carl Yastrzemski combined! Though that makes sense, because the baseball season rarely, if ever, stretches into January. Nonetheless, that shouldn't diminish what this Patriots team has been able to accomplish over the past 16 years. The only thing standing in the way of the franchise's record 9th Super Bowl appearance is a game Steelers squad. These teams are somewhat polar opposites in the sense that the Patriots are notoriously tight-lipped off the field and buttoned up on it, whereas every Pittsburgh player will have their iPhone taped to their chests this Sunday so they can Facebook live the entirety of the proceedings. Just kidding, it won't be the whole game, most of the phones will be broken on each player's first snap, but what a ride it will be while it lasts! Actually, even the video that does get captured will be mostly opposing players' chests, while some feeds will just be completely dark because a few nimrods will accidentally have their cameras in selfie mode. I'm still on the fence about this result, and unfortunately we don't have CriColl to provide any of his renowned insight to assist me in my decision. To make matters worse, the only analyst I was able to get a hold of on short notice is the man calling this AFC title game. So I apologize in advance, but here's Phil Simms:
It's CriColl!!! We're saved! What choice do I have now? I'll agree and take New England.

Want To Increase Your ClickBank Traffic And Commissions?