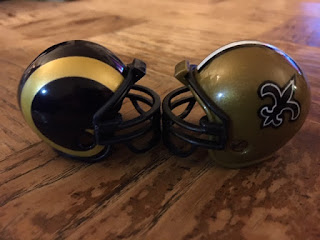 Oh baby, it’s the NFC title game that everybody wanted to see! Except for the fans of the 14 other teams in the conference. Though, I imagine even that contingent would begrudgingly admit that this should be an entertaining contest. When the Rams and Saints first met in the Super Dome in Week 9 it resulted in 80 total points and even more yards! Yep, more than 80 yards. Back in early November, prior to that first game a lot of wannabe analysts and purported NFL pundits opined that it could determine who would host the NFC championship game. Sadly, it turns out they were right. It’s just so aggravating when casual fans fancy themselves experts. Leave the analysis to people who really know what they’re talking about, ok?!? Anyway, what was I saying? Oh yeah, I predict that there will be at least 100 yards of total offense in this game, probably by both teams. Going into Sunday this one looks pretty even, and, in fact, the score is currently tied at 0. I expect it to remain as such up until some point in the first quarter, unless the Rams successfully petition the league for a 3 point head start to counterbalance the Saints’ home field advantage. Don’t bet on it though, as the league has only agreed to such a request four times so far this season, and most of those involved the Raiders. In the end I believe that aforementioned home field edge will be exactly what pushes New Orleans over the top ... literally, when a Rams receiver gets confused by his indoor surroundings and loses a key pass in the lights. 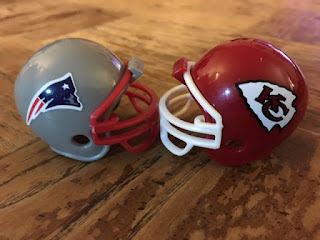 Couldn’t we all see this coming after the first Pats/Chiefs game in Week 6? Well maybe not all of us, considering I predicted that both of these teams would lose in the Divisional Round. So as recently as last week I didn’t think either team would be playing in the conference title game. But really, I can’t say that I’m surprised, the Chiefs’ offense has been a runaway train all season, whereas the Patriots are more akin to a European train: on time, reliable, and filled with an inordinate amount of white people. This is the eighth straight AFC championship game appearance for New England, as opposed to the Chiefs who haven’t been here since January of 1994. And, believe it or not, this is the first AFC title game to ever be played in Kansas City. Couple that with a kick off of 5:30p local time and Arrowhead should be a madhouse. I originally thought the only thing that could tamp down the enthusiasm of the KC fans was a kickoff temperature in the teens.  Now, however, the forecast has improved to 30+, so we can probably through that factor out the window. I suppose the fact that the opposing team is the Patriots, who are usually pretty good at making it to the Super Bowl could be another buzzkill for the Arrowhead crowd. Taking everything into account I’m going to go with the Chiefs in a close game that’s not quite as high scoring as the 43-40 shootout we saw from these two in October. But don't be surprised if the Patriots win, because that's what always happens.


Unfortunately, these games will be broadcast on Fox and CBS, respectively, meaning that viewers won't be hearing from Cris Collinsworth this weekend. Luckily for you though, he has such an appreciation for this blog that he's provided us with some of his trademark, hard-hitting analysis for this Sunday's match-ups. Enjoy: