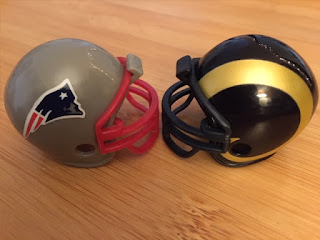 The main question coming into this game is will Bill Belichick be able to dismantle the Rams’ offense again, as he did in Super Bowl LIII. You’d imagine that Sean McVay would make the necessary adjustments to avoid such a repeat, but if LA’s performance against the Dolphins earlier this season is any indication, maybe we shouldn’t make any assumptions. Miami’s head coach Brian Flores was the defensive coordinator for New England in that aforementioned Super Bowl, so it’s fair to say that that Patriots coaching staff has the Rams’ number. Then again, the Pats’ offense didn’t necessarily light the world on fire the last time they played, and that unit is markedly worse than they were two seasons ago, so we may be headed towards another low-scoring affair. Then again again, maybe a game that was played 22 months ago will have no bearing whatsoever on this one. Try telling that to the inside of Jared Goff’s head though. Inside that dusty wasteland, beyond the tumbleweeds, lives the lasting memory of what happened the last time he went against Belichick. Whether that fuels him to conquer his demons on Thursday or starts a brushfire that melts his skull from within remains to be seen.