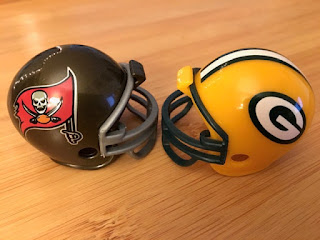 It’s an Adam Cole (bay bay) match-up with a trip to the Super Bowl on the line. A couple things are working in the Packers’ favor here: they’re playing at home and their offense seems to be borderline unstoppable right now. But recent history also seems to point to a Green Bay win. Six of the last seven NFC championship games have been won by the home team, and ten of the last twelve teams that won their divisional round game on the Saturday preceding the title game (as the Packers did) have moved on to the Super Bowl over the team coming off a Sunday game. But the Bucs have some favorable history of their own. For instance, their quarterback, Tom Brady (9-4), has a much better conference title game record than Aaron Rodgers (1-3). In fact, only two quarterbacks have ever topped Brady in a conference championship: Peyton Manning three times, and ... care to take a guess? That’s right, the FlaccMan himself, Joe Flacco! And, for better or worse, Aaron Rodgers is no Joe Flacco. Now, do any of those stats have any bearing on this Sunday’s outcome? Probably not. Home field means less than ever this season, and as impressive as Tom Brady’s conference title game record is, none of those appearances have been as a member of the Bucs. The Saturday thing though might be worth some consideration. I mean, if you were 43 years old, wouldn’t you want an extra day off in between games? I’m 35 and not a professional football player, but I know I enjoy a long weekend. Though can you imagine how many extra e-mails the Packers will have to sort through before the game? Almost not even worth it. Expect Green Bay to start slow as a result, but once they get everything sorted into the correct folder I think they’ll find their footing and come out on top. And then, and only then, will Aaron Rodgers be in the same stratosphere as Joe Flacco. 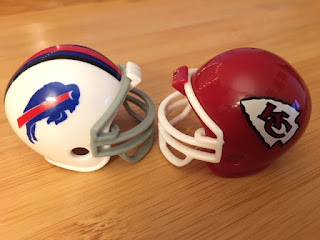 Let’s cut right to the chase, this game comes down to two factors. Number 1: will Patrick Mahomes clear concussion protocol in time to play for the Chiefs? Number 2: will Patrick Mahomes clear concussion protocol in time to play for the Bills? Look, I know it seems outlandish, but in only three seasons as a starter Mahomes has expanded the possibilities of his position, so who’s to say he can’t play all-time quarterback this Sunday? And don’t just tell me “league rules” or “his contract” (by the way, I said that in a really condescending, whiny voice). Don’t get me wrong, Josh Allen is a heck of a QB in his own right, but I think the time has come for us to start maximizing our exposure to Mahomes. If last week’s scary knockout blow to KC's signal-caller taught us anything it’s that NFL careers can be derailed in an instant. So it only makes sense to cram as much Mahomes down our gullets as possible as quickly as we can. Which is exactly why we need him out there for each and every snap. Now some might argue that that would only increase his odds of suffering an injury that could jeopardize his future. Fair point, but come on, you’re telling me it wouldn’t make an October game against the Broncos more interesting to have Mahomes playing QB for both teams? And isn’t that worth risking it all? To make our viewing experience of a lame midseason divisional match-up slightly more entertaining? As for this game though, it should be a fun watch either way. Unless, of course, Mahomes doesn’t play at all. Though I suppose watching Chad Henne try to get to the Super Bowl would have some entertainment value. Maybe Henne should be the one playing all-time quarterback ...? Alright, I think I’m chasing my tail at this point, let’s just get to the pick.

While NBC has broadcast its last game of the season that doesn't mean we can't get Cris Collinsworth's two cents on the NFC and AFC championship games. Let's see what ol' CC has to say about this Sunday's CCs:

I am gravely concerned.