After missing an open Randall Cobb for a would-be (possibly) game-tying touchdown near the end of last Sunday's game in Carolina a visibly upset Aaron Rodgers was seen on the sidelines tossing down a Microsoft tablet in frustration. The natural assumption would be that he was looking at a clip of the play in question, but as it turns out the coach was actually just showing him this. After consecutive tough losses expect Rodgers' and the Packers' frustration to manifest itself on the field against the Lions. And by that I mean they're going to beat them by a lot; you got that, right?

This Cowboys season is starting to remind me of the movie Armageddon. If you'll remember, in that film there was a ticking clock until the asteroid reached the zero barrier, at which point even if that ragtag group of offshore drillers did manage to blow up the asteroid the two resulting halves would still collide with Earth in an apocalyptic fashion. Well, I think Dallas is about to reach the zero barrier. If they lose this game to drop to 2-7, it will probably be too late even though Tony Romo will return the following week. Despite the fact that they should improve with Romo back their season will still collide with Earth in an apocalyptic fashion. Add in the direct corollary between key Dallas players and characters in the movie ... Dez Bryant and Ben Affleck's character AJ, young hotheads who think they should be running the show; Jason Garrett and Billy Bob Thornton's character Truman, men who try to do their job even though they are constantly usurped by superiors who render them powerless; Greg Hardy and the asteroid, both giant, destructive forces devoid of humanity ... and the similarities become too obvious to ignore. Unfortunately for the Cowboys they don't have a Harry Stamper on their team and I think they'll cross zero barrier this Sunday.

Even though they are 8-0 many, including myself, are still wondering if the Panthers are for real or if talk of them going to the Super Bowl is a bunch of malarkey. Coincidentally, this week they travel to Tennessee to face a Titans team that has a bunch of Mularkey.  Or more accurately one Mularkey, but you get it. Tennessee won last week in interim coach Mike Mularkey's debut, further elucidating that I should pick the team who just fired their coach regardless of the circumstances. I doubt that they'll make it two in a row though. Carolina will win, but by just the right amount to make us all still suspicious.

I'm not sure if you watched this past week's Monday Night Football game between the Bears and Chargers, frankly I wouldn't blame you if you didn't, and if that's the case you didn't get a chance to see and hear that Qualcomm Stadium in San Diego was seemingly half-filled with Bears fans. The same thing happened when the Raiders visited SD a few weeks back. It would be understandable for the Charger fans to be disenchanted with not only the team's current season but also the looming likelihood that the team won't be playing there at all come 2016. That's one way to explain the influx of opposing fans, but I suspect a more dastardly cause. I posit to you the theory that the Spanos family (owners of the Chargers) are buying up any and all tickets available on various resale markets, then paying a group of extras, outfitting them in the other team's gear, supplying them with copious amounts of booze, and sending them in to Qualcomm to fuck shit up in an attempt to sandbag the homefield advantage in San Diego and further prove to the rest of the owners in the league that a move is necessary. Provide me with a more sensible explanation. Go ahead, I'll wait. Wait this is the Bears/Rams game, why was I talking about the Chargers? Whoops!

I've been writing this picks column for just over 6 years now, resulting in a grand total of 194 posts (including Thursday night games). Thanks to the statistical metrics offered by blogger.com I was able to track down the one fan who's read each and every one of those posts. The following is the email correspondence I exchanged with him:

Erik: Let me just begin by saying thank you for your unwavering support. How did you find out about the site?

Kryzak943a&67: Local single girls who want to date you!

Erik: I'll admit I'm intrigued, but I guess what I was really trying to get at is what the circumstances were that led you to this blog.

Erik: I see. So you came here via a link from another site?

Erik: Thank you for your time.

In retrospect it seems clear that the "reader" in question was just a spambot. The fact that the IP address was from Russia makes a bit more sense now. Well, here's to 194 more, hope you're there for every one of them Big K! I'll take Washington in a bit of an upset.

Despite all the consternation about how lousy the Eagles have been they are sitting at 4-4, which is good enough to be a mere half game out of first in the NFC East. So why does it seem like they've done much worse? Perhaps it's because our rush to judgement of these young men was swifter than the pace Chip Kelly's offense. Have we no patience?!? Shame on us. I'm willing to give Philadelphia another shot, meaning the Eagles, not the actual city. I drove past it once and it seemed boring.

There's a small child in Pittsburgh whose family is not of exceptional means. Before the season his father set aside some money to treat him to his first professional football game. They've had it planned for months now and this is the Sunday that they chose so many days ago. It was supposed to be a major milestone in the boy's life, and now, for the rest of his days, when he recounts his first NFL game he'll have to tell people that the starting quarterbacks were Josh McCown and Landry Jones. The league must take even greater steps to protect quarterbacks, if not for the players themselves then for this small boy in Pittsburgh.

I'm starting to think I can't trust Blake Bortles to win on the road, mainly because Blake Bortles has never won on the road. He's now 0-10 in his short career. I don't mean to rub it in or anything since I know that Bortles, like all of the Jaguars, read this blog religiously, I'm merely expressing my disappointment because I expect more from you guys. Unfortunately I don't think you'll quite get there this week. But hey, if you were playing horseshoes or throwing grenades you'd be in good shape. I know you're not doing those things, you're playing football, I'm just saying. Look guys, don't be jerks.

Sure these teams met in Super Bowl XI, and that's all well and good, but they also didn't meet in the title game after the 1977 and 2000 seasons. That's right, this was Not Super Bowl XII and Not Super Bowl XXXV. If the teams had met in SB XII it would have been the first back to back rematch in the title game's history. And if they had squared off in SB XXXV we would have seen a possible shootout with Culpepper, Moss, and Carter going up against Gannon, Rice, and Brown. Of course, those teams only combined for 3 points in their conference title game losses, so maybe that expectation of a barn-burner is misplaced. The current Raiders offense, and defense for that matter, has shootout capability as we saw last week in their high scoring loss to the Steelers. However, the Vikings are more of a fistfight group, which could cause problems for them this week, because, as I just mentioned, the Raiders might be bringing guns. 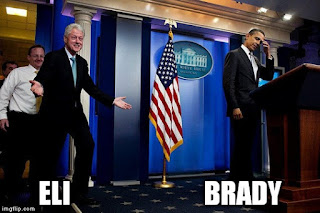 The above meme really embodies how I see the juxtaposition of Eli and Brady. Just when Tom Terrific thinks he's conquered the world and he's the greatest of all time Eli shows up with a dumb look on his face to shatter his universe. While 8-0 isn't quite 18-0 it would certainly get Brady's hackles up if Eli bested him again this Sunday. Arise hackles!

Aqib Talib argued that he did not intend to poke Dwayne Allen in the eye during a skirmish in last Sunday's Broncos/Colts game. Judge for yourself. My question to Talib would be what his intention actually was? Did he notice a loose eyebrow and felt he should take it upon himself to pluck it for Allen? Was he asking how to do the Scout's Honor hand signal because he forgot and assumed Allen had spent time in the Scouts? Was he trying to poke him in the other eye? Those are the most believable explanations I could think of. Either way, the NFL wasn't buying it and they upheld their one game suspension of Talib. Without him and DeMarcus Ware the Denver D could be a bit less formidable than usual, but that's still pretty formidable. The Chiefs offense? Not quite as formidable. And as Vince Lombardi always said, "I'll take the team who's got the most formidable unit. It's a good thing my wife doesn't feel the same way." That was from Lombardi's famous live album back in '68. He was a big influence on Dangerfield.

Time to check in once again with Sunday Night Football analyst himself Cris Collinsworth:


Much appreciated CriColl, and I will check my e-mail just as soon as I get a chance. As for the game, I agree Russell Wilson will find a way to get the job done. The Hawks will need him to seeing as how a big second half of the season is necessary for a serious playoff push. If it's anything like their last three seasons, in which they've gone a combined 20-4 in the second halves, they should be in good shape.

The Texans' return from their bye week a half game back of first place in the AFC South with Andrew Luck's injury leaving the door to the division title wide open. Of course, you and I both know that Matthew Hasselbeck will soon emphatically slam that door shut, but Houston shouldn't let that stop them from trying. Speaking of trying, the Bengals have been trying really hard to win games this season, and it shows! Like every game, whoever gives the best effort in this one will win. That's an incontrovertible fact folks.

Looking for the Ultimate Dating Website? Join to find your perfect match.