Aaron Rodgers only threw for 77 yards in last week's loss to the Broncos, an unimaginably small amount for him. Hell, I had more passing yards than that last week. Don't believe me? Well you didn't watch the end of the Tennessee/Houston game did you? Ok, more accurately, you didn't watch any of the Tennessee/Houston game did you? Yeah well, I got some run. Sure, it was mostly garbage time and the Texans were playing a soft prevent zone, but I took what the defense gave me and I'll make no apologies for that. As for Rodgers, I did expect him to struggle against Denver, just not quite to that extent. This week he's going up against what appears to be another tough defense on the road. However, if Rodgers watched the end of Carolina's Monday night game against the Colts he probably saw the problems that the Panthers' D had against the no huddle offense that Indy had to run to get back in the game. I'd expect the Packers to employ that kind of hurry-up O from the get go in an attempt to keep the Panthers on their heels. But hey, what do I know? Don't answer that.


If you've come here via Twitter, well unfortunately Cousins hasn't shouted anything about favoriting lately. What's that? Twitter just switched from "favorites" to "likes"? Well then ...

If we take a more in depth look at that clip though, was anybody else really frightened by it? No? Yeah, that's weird, because he seemed just as loud and animated as Richard Sherman in his famous post-NFC Championship Game rant. Yet the former was just lighthearted fun, whereas the latter was a scary moment for Erin Andrews and a polarizing topic for the nation. Sure Cousins wasn't trash-talking his opponents, but it still feels like at least a bit of a double-standard. I expect New England to build another large lead in this game, followed by a late TD or two for Washington. If I were a reporter at Kirk Cousins' postgame press conference Sunday after what will most likely be a loss I'd be compelled to ask, "Did you like that?"

The Titans fired head coach Ken Whisenhunt this week after he amassed a paltry 3-20 record over a season and a half with the team. While it would be easy to ridicule Whisenhunt, I'm convinced that the man is a genius. He was signed to a five year contract, which means he has three and a half seasons worth of money still coming his way. He's going to get paid millions of dollars to not be the Titans coach. Good work if you can get it. I don't coach the Titans either, but they aren't paying me any money not to do it. I can only deduce from this that Ken Whisenhunt is much smarter than I am. Could Tennessee rally together and get a win in their first game post coaching change like Miami did earlier this season? No. It's an absolute impossibility. New Orleans will win.

Alas, here are two teams who entered the season with high hopes of making the playoffs, yet now they sit at 3-4 ... one game out of a wild card spot?!? Oh yeah, this year's AFC is top heavy, and once you get past the undefeated teams there's a lot decent/mediocre/crummy squads fighting it out for our enjoyment (we really are disgusting). So while Miami and Buffalo may not be thrilled with the start of their respective seasons, they still have a solid chance at playing in January. Actually, after a quick check of the schedule I'm going to go ahead and guarantee that BOTH of these teams will be playing in January! Hey what are doing? No don't go check the schedule yourself ... Baaaahh! Ok, yes, the last week of the regular season is in January, so that's really not a bold prediction at all. Why must you be so inquisitive? Can't you just let me have one of these once? Anyway, the original point still stands: whoever wins this game is still in good shape to contend for a playoff spot in the AFC.

Here we have two NFC wild card (and still possibly divisional) contenders with top notch running backs, electric receivers, and quarterbacks who aren't normally asked to do too much. This game is the football equivalent of the Summerslam '94 match in which the Undertaker fought himself. The only question now is, which one is the Undertaker and which one is the Underfaker? I think the Rams' superior defense gives them the advantage. Then again, my pick will ultimately be determined by whichever team is led out of the tunnel by Paul Bearer.

You may not know this, but this website allows me to track not only how many views the blog gets, but also where they come from on a global scale. A couple weeks ago I couldn't help but notice I had 53 hits from the UK. I see ya Jags! Again guys, I can't express enough how much I appreciate the support. But you know me, and you know that I always come correct (at least I think so; I'll be honest, I'm not 100% sure what that means; if it means that I always get my picks correct then I'll have to redact that statement), so I'm going to have to pick the Jets to bounce back from consecutive losses in this one. There ya go Jags, do a CTRL+P, stick it on the bulletin board, and thank me later.

The Steelers have the most potent "Big 3" in the league, however, due to a combination of injuries and suspension they've only been able to field two of the three for most of the season. Now Meatloaf would have us believe that two out of three ain't bad, but can we really trust Meatloaf in this situation? Sure he's in like 45 fantasy leagues, but what does he know about real football? In this case though, he just may be right, mostly due to the fact that DeAngelo Williams was a more than adequate replacement for LeVeon Bell earlier this season, much in the same way that meatloaf the food is a decent substitute for a real dinner.

It felt like last week's Giants/Saints game should have been announced by Chris Hardwick. Come to think of it, they might want to call him in for this one as well. The Bucs tried their best to blow another big lead last week against Atlanta, but apparently the Falcons didn't want their help. The Giants could use a little boost, so a comeback victory for New York is in order. 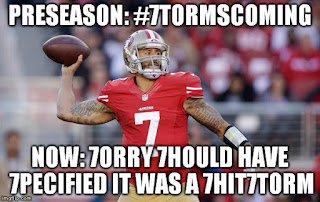 In my opinion there is no greater insult to anybody in America, regardless of their job, than hearing the statement "We're replacing you with Blaine Gabbert." Unfortunately for Colin Kaepernick he's now living this nightmare. This has to be rock bottom for him. And when you think about it also has to be rock bottom for Blaine Gabbert. When everybody is talking about how crazy it is that a very lousy Kaepernick's been benched in favor of you it really says a lot about your career as well. Basically they're pulling each other down in a sinkhole of ineptitude. Coincidentally that's exactly the surface that Levi's Stadium was built upon, which helps to explain the godawful turf quality.

After seeing them dismantle the Packers last Sunday night I think it's safe to say that the Denver Broncos are back! And they're 7-0?!? It's hard to know if that stellar SNF performance is an anomaly or a sign of things to come, but it's important to note that, they're 7-0! They've only had one impressive outing this season and somehow they're undefeated. Of course, it's mostly due to their defense, who seems to as if they will feast on Andrew Luck and his new offensive coordinator this week. Add to that the fact that the Colts are 0-5 outside of their division and this one is like a self-cleaning nose, it picks itself.

And now here he is folks, Cris Collinsworth! As per his wish, we are using a brand new picture to accompany his audio file:


Hmm, sorry CriColl, I should have mentioned that we never actually received your picture attachment on that e-mail, so we just used our best judgment in selecting a new pic. Hope you like it!

Do you think Hank Williams, Jr. (AKA Bocephus) still has all his rowdy friends over to watch Monday Night Football every week? I know he hasn't done the intro song in years, but that doesn't necessarily mean he's stopped having his famed Monday night parties. If so, I'm left to wonder whether this game would make his friends more or less rowdy than they normally are. On the one hand, this match-up is so lame that it could subdue even the rowdiest of crowds. Then again, the sheer lousiness of this match-up could infuriate the bunch, making them even rowdier. If that's the case, then look out! You don't want to run into Bocephus and the boys when they got their rowdy up. This is a game in which I'd really like to pick no one, and every time I think I know who's worse something new presents itself to the contrary. I'll just pick the home team and check the score on Tuesday.