I know what you were thinking when you saw these two teams pitted against each other on the schedule: it's a classic Horizon League basketball match-up! Not so fast buddy. While Oakland and Detroit are Horizon rivals, don't tune in to this one expecting to see star Oakland guard Kahlil Felder or Detroit's Freshman sensation Josh McFolley. Instead you'll be treated to Derek Carr and the Raiders attempting to right the ship (because they're pirates!) against against a Lions squad that's riding a one game winning streak. Can the Lions stay hot, or rather, warm? No, they live in Detroit and it's November.

With Andrew Luck down and out for at least a few games most experts believe their chances have taken a hit. Of course, with Matthew Hasselbeck taking the reins, we know better. If anything, MH at the helm means the Colts are now guaranteed to win the AFC South. This man still wants the ball, and he still wants to score. Whether or not he will remains to be seen, but his leadership alone should carry Indy.

After the Texans' Monday night victory over the Bengals J.J. Watt used a post game interview as a platform to take a jab at Cincinnati quarterback Andy Dalton, saying the Houston D made the Red Rifle look like a Red Ryder BB gun. It was a decent, seemingly harmless ride, but Andy Dalton took it very seriously, responding with this:
"I'm disappointed in him because of the integrity of this game. I have a lot of respect for him. He's a really good player. There are a lot of kids and people who look up to him, and for him to make comments like that, he's just showing that's acceptable to say that kind of stuff."
Wow Andy, that was not the way to handle that. You know those kids you were referring to? They think you're totally lame now. And they're right. You need to set a better example for them by showing them how to correctly handle getting shit from someone. 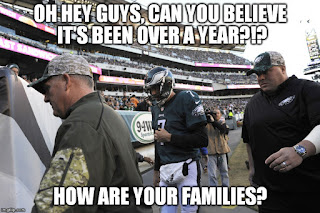 Shockingly it took Sam Bradford 10 weeks to leave a game due to injury. But he made up for (not) lost time by exiting last Sunday with a separated shoulder and a concussion. The Eagles now turn to Mark Sanchez for at least one start. While it may look like an easy match-up for Philly on the surface I'm actually starting to believe in the Bucs. I mean they put up a whole 10 points in their win over Dallas ... No matter that their lone touchdown came after they were bailed out on a fourth down defensive holding call near the goal line. I think Tampa gets the win on the road and goes to .500 ... Wait what?!? A win gets them to .500? How the hell did this happen? Maybe I should rethink a pick that would result in that. Hmm ...

The Broncos have now lost back-to-back games, the last one coming courtesy of Peyton Manning's worst game as a pro, which was punctuated by an injury. Now, they travel with their backup QB Brock Osweiler to face a Bears team that is suddenly competent. Denver needs a turn around to say the least, and I think I've got just the thing. Head coach Gary Kubiak should put even more gel in his hair, tuck a cigarette behind his ear, toss on a leather jacket and start going by the name Gary KOOL-biak. Can you imagine how inspiring that would be for the players? They don't want to play for some lame nerd who drives a Lexus, they want to play for the bad boy who cruises to the stadium on his hog, even if it's an away game. This would 100% work. He probably won't do it though, so I'll take Chicago.

This is getting ridiculously redundant, but here's another game in which a team is starting a different quarterback than they did last week. Go ahead and look back at the previous picks, this is the fifth such game in a row! Not to mention that the next one qualifies as well, but we'll (and I do mean we'll) get to that in a minute. The new QB that seems to be getting the least pub is Case Keenum, who is filling in for the benched Nick Foles. The Rams had high hopes for Foles, but I have to believe that they curbed their enthusiasm when he showed up to the building for the first time and they finally saw what he looked like without his helmet. A season-long e-mail thread titled "Our QB's a Total Goober" finally led to action, with the team moving to their backup ahead of this Sunday. While I normally wouldn't trust a 2nd string quarterback on the road the sheer lousiness of the Ravens is pointing me toward St. Louis. I just hope I don't get pointed slightly askew and end up in East St. Louis.

Here is yet another new quarterback starting for a team, and one that the Cowboys have been waiting for for quite some time. But I happen to know one man who is even more eager to witness the return of Tony Romo. Ladies and gentleman, I present to you Bonus CriColl!!!


I'm elated for ya buddy, and consequently I'll side with Romo and the Cowboys.

Cam Newton is catching a lot of flack lately for his dancing after first downs and in the end zone. If I were opposing teams I wouldn't be mad that he's doing it, I'd be disappointed that his moves are so lame. I'm sure he's doing a specific move, but whatever, it looks dumb. In fact, that's kind of how I feel about Newton, and the Panthers as a whole: whatever, they look dumb.

After winning three straight to get to 4-5, the Chiefs are now legit wild card contenders in the AFC. But will their newfound legitimacy prevent them from giving up on the season? I guess what I'm asking is, are they too legit to quit? Hey? Hey? I think they'll keep it up and get to .500 on the season.

Like a fourth grader who's studied hard for a math test, the Vikings can establish divisional dominance with a win over the Packers this week. At the same time, like a fourth grader who drank a whole two-liter of soda the night before, there's a decent chance that the Vikings might shit the bed on Sunday. Which fourth grader will show up in Minnesota? I'm going to guess the one that studied ... but what if they stayed up late to do said studying by drinking a heavily caffeinated two liter of Jolt Cola? Probably best not to even consider that option.

If there's one way for your team to get back on track it's to invite Blaine Gabbert to town for a friendly game of tackle football. Of course, this is a newfangled theory. It used to be very easy to get a team back on track because they all traveled by train. In a related story, Blaine Gabbert has just been named the new face of Amtrak. The Hawks need this one ... and all of the rest of the ones really, but it's gotta start somewhere.

And now in his normal Sunday Night Football duty for HCM here's the esteemed Cris Collinsworth:

After the Patriots barely sneaked by the Giants it's now apparent what's happening here. You see it, right? It wouldn't be the first time. It wouldn't be the second time. C'mon, it's staring us right in the face: we're heading toward another Giants/Patriots Super Bowl. Unlikely you say? You probably said that in '07 and '11. Just look at that pattern; it happens every four years! They're on the same cycle as the Women's World Cup. Even the Giants' path to the Super Bowl looks eerily similar. Hypothetically, the Giants would get into the postseason with a mediocre record as NFC East champs again. Let's say, for the sake of this argument, that the playoffs began today with the standings currently as they are (which would be strange since some teams have played 10 games, but cut me some slack), first up for NYG would be the wild card Falcons; sounds familiar. They'd then, most likely, travel to Carolina to play a top-seeded Panthers team. The Giants beat the NFC's top seed in the divisional round in both '07 and '11. In the title game would be the Cardinals, who seem comparable to past foils the '07 Packers and the '11 49ers. Then, of course, a heavily favored Patriots fan would be waiting in the Super Bowl. So beware New England, because I know you've seen this movie before, and it really seems like a trilogy has been green-lighted. But if I actually thought this was going to happen it would mean that I don't believe the Seahawks will win the Super Bowl, or even make the playoffs. And does this look like the face of someone who doesn't believe to you? 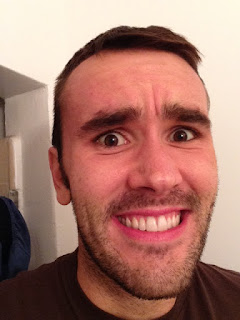 I didn't think so! While the Giants/Patriots narrative is an interesting one, it simply can't happen.