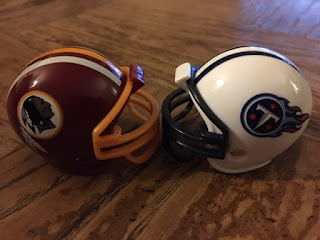 Washington ended their four game losing streak last week and announced to the NFL that they are NOT out of the playoff race yet. To which the rest of the league replied, “Huh? What are you doing here? How did you get in my house? I’m calling the police.” Washington vacated the premises, but they’re not ready to do the same when it comes to the 2018 season just yet. Though this matchup against the Titans is looking less favorable by the week, with Tennessee running back Derrick Henry steamrolling defenses and uh, well I’m not really sure they have anything else going on at the moment, but maybe that’s enough. I’m guessing it will be this week. And after the game Washington will announce to the rest of the league, “We’re still not completely out of this, as long as we catch a couple breaks on Sunday. Now may we please use your bathroom?” 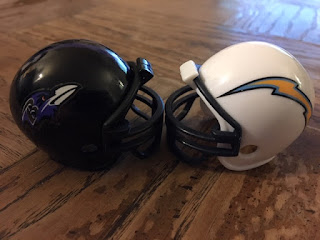 This is a match-up between the two teams currently holding the AFC wild cards. If you ask me two wild cards in one game is too many. It’s like 5s and 6s? Uh ok, I have five of a kind ... and a full house. It’s just too ridiculous. In that vein, look for this game to be all kinds of nuts with both teams going all in on the first play and then one of them having to buy back in so that they can actually fill four quarters of action as mandated by league bylaws. Also the pizza hasn’t even arrived yet, so they should really keep playing. 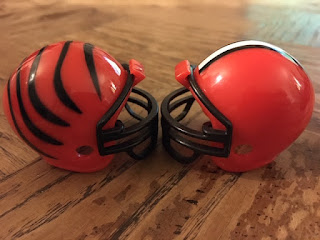 There is still a path for the Browns to get to the playoffs. It is a winding path that still needs a lot of bushwhacking to make it navigable, but it can happen. Here’s the scenario: Washington beats Tennessee (it could happen), the Ravens lose to the Chargers (very possible), the Browns beat the Bengals here (likely), the Colts lose to the Giants (you never know with New York); then next week the Browns win in Baltimore (not impossible) and the Colts and Titans tie (uh oh). Ok, so any scenario that relies on a tie is precarious at best, but we’re talking about the Browns making the playoffs here, it’s a minor miracle that they’re this close so perhaps we shouldn’t rule out the seemingly impossible. Probably the easiest box to tick off on that checklist is Cleveland beating Cincinnati, and that’s exactly what will happen here. Or the Browns will spectacularly fall on their faces and we’ll all have a good laugh. 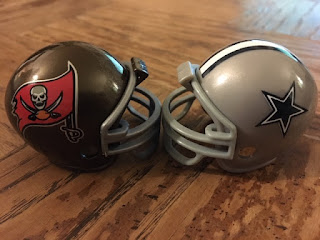 The Cowboys are on fire! You do not want any part of them in the playoffs. They’ve won five in a row, they have a stranglehold on the NFC East, aaaand I’ll be honest I didn’t catch their last game. Let me just check what happened ... Zero points?!? They didn’t score a point against the Colts. How did that happen? Alright, so perhaps we all got a little carried away on anointing Dallas as the most threatening team heading into the playoffs. Or perhaps not ... What’s more threatening than an opponent you think you’ve got beat? An asteroid heading directly for earth of course. I think that’s unequivocally more threatening. Didn’t you see Armageddon? Deep Impact? Anyway, if we’re talking in terms of football these Cowboys should still be considered highly dangerous and handled with care. In other words, whoever plays them in the playoffs should focus on beating them. 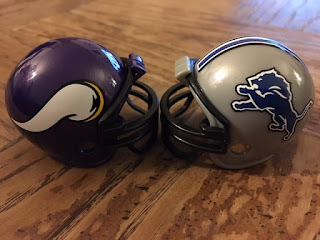 For the Vikings these next two weeks are simple, win both games and you’re in the playoffs. For the Lions the goal is perhaps even simpler, wreak havoc. Yes, Detroit is merely here to play spoiler this week, and if I were them I would attempt to take it to the next level. I wouldn’t just spoil the Vikings’ season I would spoil countless movies in the process. The audibles would be switched from “Omahas” and the like to “Bruce Willis is a ghost!” or “Spacey is Soze!” or “Spacey is a rapist!” That last one’s less of a movie spoiler and more of a news spoiler. Of course the Minnesota players would be freaking out and trying to plug their ears, they’d be in total disarray. That would allow Matt Stafford to slice and dice the Vikings’ D just like Billy and Stu in Scream. Spoiler alert! 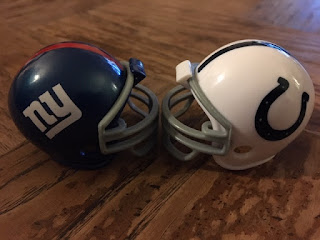 It’s possible for the Colts to finish 10-6 and miss the playoffs. That hasn’t happened to a team since 2015 when the Jets got squeezed out. Indy shouldn’t fret though, because those Jets used that near miss as a springboard to subsequent records of 5-11, 5-11, and now 4-10. Uh oh. Ok, so the Colts need to make the playoffs by any means necessary. I’m guessing they’ll send an operative to San Diego to poison the Ravens at their team hotel in an effort to ensure they lose to the Chargers. Nice try Colts! The Ravens aren’t staying in San Diego, they’re playing in Los Angeles you morons! Your franchise is doomed. 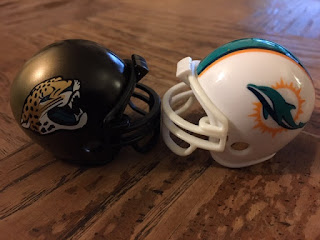 It’s a good ol’ fashioned Florida fracas! And since the three teams from the state all play on different divisions residents from the panhandle to the southern tip will be coming out in full force to have a look-see at this one. Of course this game will have the trappings of any intra-Floridian contest: a smattering of live gators allowed to roam the grass at their leisure, a ban on shirts for all males in attendance, and a concurrent NASCAR race with its track surrounding the field. And, as per usual, the winning team will be granted season passes to Busch Gardens. So crack a tall boy, grab a seat on the couch in your front lawn, and enjoy this showcase of America’s finest state. 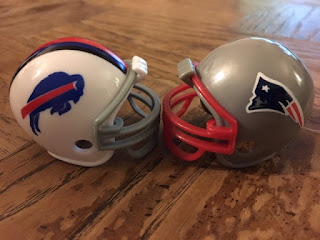 This is it, the Patriots are finally through. They’re third in the AFC at 9-5, have lost back to back games, and are sputtering toward the postseason. This of course means they’ll win their last two and fall into the #2 seed at worst. Then the top team in the AFC will lose in the second round giving New England a home game for the conference championship, which they’ll undoubtedly win to move on to another Super Bowl. So yeah, nothing has changed here. 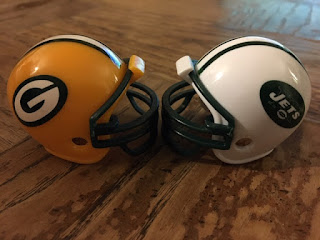 The Packers are officially out of playoff contention. Perhaps they R-E-L-A-Xed too much. Now there’s speculation that Aaron Rodgers will be shut down for the remainder of the season. I for one happen to know that he will play, because there’s nothing that Rodgers enjoys more than playing through the pain and exaggerating how much it’s affecting him. 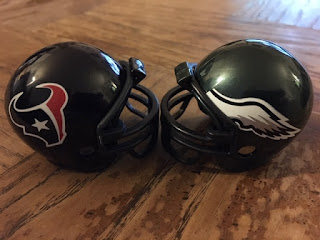 The Eagles are back! And after beating the Rams in LA they’ve proven that they can go toe to toe with anybody in the playoffs. The only problem is that  they still need quite a bit of help to actually qualify for the postseason. But good luck telling Nick Foles he can’t do something. People have been trying that his whole life, and he used to listen to them. But after Super Bowl LII, no one can tell him what he can’t do. As a result Foles has committed a staggering number of crimes over the past  ten months. Most of them are petty thefts or involve unpaid restaurant bills, but I happen to know that he also drove a Ferrari off the lot and never came back. That trial is pending, but another trial awaits on Sunday. In this one he’ll be found guilty, of losing. 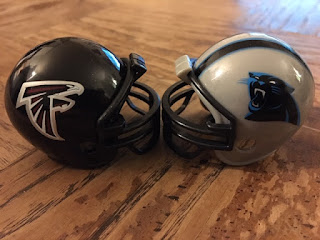 A lot of people are criticizing Cam Newton for wasting 10 seconds celebrating a first down at the end of the first half in the Panthers loss to the Saints last Monday night. But I think everyone should lay off Cam, I’m sure he knows he did something stupid and that he’ll learn from it and grow as a person. I mean c’mon, this guy has a good head on his injured shoulders, he’s not just going to carry on celebrating like a moron while his team continues upon a devastating 8 game losing streak to finish the season. That’s not going to happen. Or at least all signs point to it not. Of course, that's because he’s not playing for the remainder of the season. Easy fix! 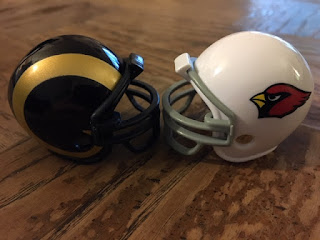 The Rams have to be glad to not be playing during prime time this week. They’ve lost consecutive Sunday night games and have to feel like the whole country is laughing at them. “Shut up! We’re actually good, we swear! No that’s not pee on our pants, it’s sweat! We’ve been playing a football game, that’s natural!” The rest of the nation likely rolled their eyes at this and continued to snicker. Unfortunately for Los Angeles the viewership on their game this week will be considerably lower, meaning they’ll just have to tell everyone that they blew out the Cardinals. Good luck convincing this skeptical country full of cynical bastards. We’ll believe it when we see it pals! And no, we won't be tuning in on Sunday! Nice try. 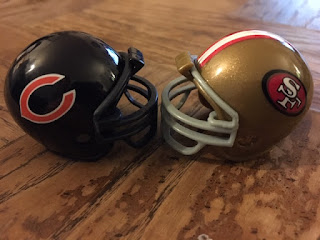 The 49ers gave played themselves out of the first pick of the draft. They have the heart of a champion but the brain of child, and not a particularly bright one. If they were smart they would’ve forfeited last week’s game once they got to overtime and proved they could be competitive. But alas, their pride got the better of them. Now though, a pride of Bears comes roaring into the Bay to decimate the Niners. And yes, I know that a “pride” is a group of lions, not bears, but answer me this: what is a group of bears called? Exactly! You don’t know. Well I got news for you, it’s called a “sleuth”. So see, it just wouldn’t have worked as well. Though I guess I could’ve said that a sleuth of Bears will be launching an investigation into a win. That does sound pretty cool ... 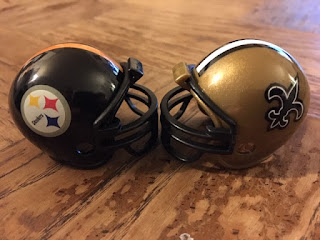 With the Rams’ loss last week the Saints now have to win only one of their two remaining games to lock up home field advantage throughout the NFC playoffs. This is a huge development, because going into New Orleans and winning is a difficult proposition for anybody not named Ryan Fitzpatrick. Meanwhile the Steelers need to keep winning to secure their spot in the postseason even after their big victory over the Patriots last week. So it would seem like something’s gotta give here, but not necessarily. Remember, I said that the Saints only need to win one of their remaining games to lock up that top seed in the NFC, so really all the Steelers need to do is convince New Orleans to hold off on that until next week and allow them to sneak away with a W here. If the Saints were chill they’d do it. 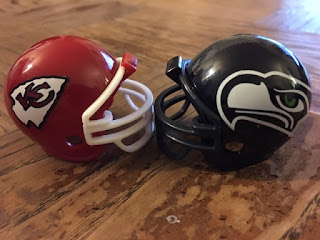 It's a holiday spectacular in Seattle, and everyone's favorite color commentator will be there to shed light on it for all of us. Let's check-in with him now to get his thoughts going into Sunday. Cris?
I couldn't help but notice you didn't offer up a prediction there. Don't worry, I'll handle it. 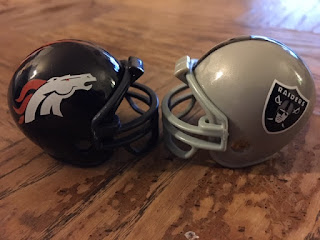 It’s Christmas Eve and the NFL apparently thinks we’ve been naughty because it’s gifting us a game that is the equivalent to a lump of shit in your stocking. I’m sorry coal, I meant to type “coal”. And in case you thought this match-up wasn’t lousy enough the Raiders signed Nathan Peterman this week. Merry Christmas ya filthy animals.