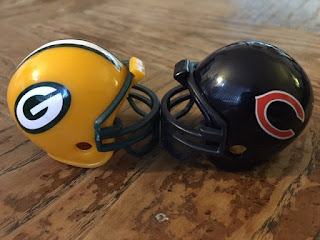 Let the celebration begin, the 100th season of the NFL has arrived! Yes, the league we all hold so dear has come a long way since that inaugural 1920 contest in Dayton, Ohio. But few know just how humble the NFL’s beginnings truly were. In fact, the first game was actually just a boxing match between Colin “The Foreigner” O’Leary and Two Fists Thompson in which a misshapen medicine ball somehow wound up in the ring. O’Leary picked up the ball only to be knocked out by one of Thompson’s two fists. When Thompson left the ring with the ball he was declared the league champion and the first ever MVP. The sport has evolved quite a bit since then, especially on the offensive side of the ball. Don’t be surprised, however, if Khalil Mack employs a Two Fist style strategy when dealing with Aaron Rodgers. The Bears temporarily knocked the Packers’ QB out of the opener last season, but Rodgers got off the mat just in time to steal the win for Green Bay. Will Chicago keep him down for the count this year? Time will tell. Perhaps on the eve of NFL 200 future generations will be reading about the results of this contest marveling at how the game used to be played by actual humans and that NFL didn’t always stand for National Frognol Legion.