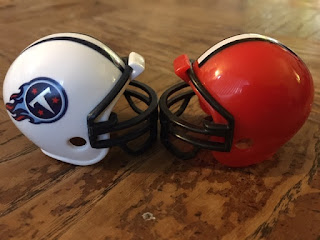 There’s a buzz in Cleveland, and I’m not talking about the city’s perpetually drunk population. Don’t worry, I’m sure they’re still there, but I’m specifically referring to the town’s football team. Many are projecting the Browns to make the playoffs for the first time since 2002. Lofty expectations and a town accustomed to disappointment are a dangerous cocktail. But I say drink it down Cleveland, it’s a good way to keep that buzz going! 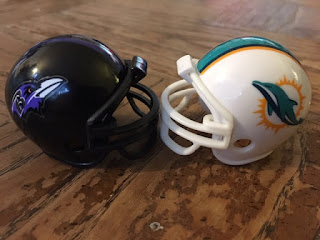 As we saw in the latter half of the 2018 season, and from everything we’ve heard prior to the start of 2019, the Ravens are dedicated to running the football. Meanwhile, the Dolphins have made it clear going into the season that they are dedicated to losing football games. That bodes well for Baltimore in this match-up. Look for the Ravens to win, and both teams to go home happy. 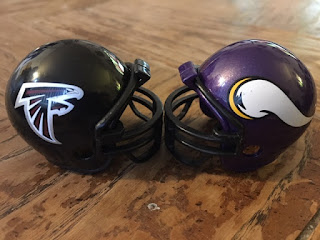 It’s a make of break season for each of these teams. And I’m not kidding. I’ve heard from a reliable source that if these teams don’t make deep playoff runs the franchises will be permanently disbanded. It seems harsh, but sometimes that’s what gets results. Fortunately for these squads I think both are capable of playing into January. Unfortunately for one them, somebody’s gotta lose in Week 1. I’m guessing it will be the visitors by a slim margin. They shouldn’t get too down on themselves though, Minnesota is a tough place to play, and it’s just one loss ... one loss that could trigger a downward spiral leading to the complete dissolution of their franchise. But keep your head up Falcons! 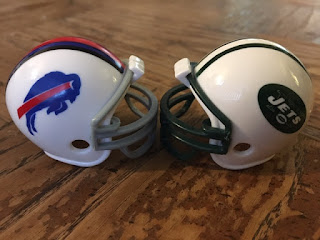 The Jets have hired Hines Ward as an offensive assistant. So far the exact details of his job description are scant, but I have a good idea of what he’ll be teaching his new team. Pick plays? Check. Blindside blocks? You bet ya. Smiling broadly like a real prick to get under the opponent’s skin and drive me insane! Yes, he’ll also be teaching them that. As such, look for a lot of fights and unsportsmanlike conduct penalties in this game while a proud Hines Ward looks on from the sidelines grinning through it all. 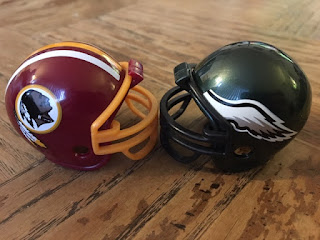 DeSean Jackson is playing against his former team. But also DeSean Jackson is playing for his former team. It’s such a confusing dynamic that if I were Jackson I’d try to use it to my advantage. Maybe line up at DB to see if Case Keenum gets confused and throws him the ball. Then again, Keenum and Jackson never played together in Washington, so that wouldn’t make a ton of sense. But then again again, it’s Case Keenum, so throwing the ball to the other team doesn’t necessarily require a caveat. 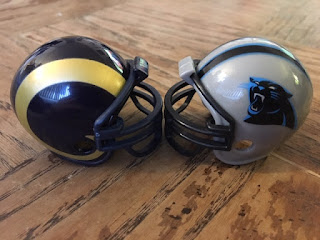 How does a team rebound after scoring only 3 points in a Super Bowl? Well let me check the history books... Hold on, still checking ... Ok, I’m in the 80s now, still no point of reference ... aaaand I found it, the one other team in Super Bowl history to only manage 3 points was the ‘71 Dolphins. The next season they became the only undefeated team in the history of the NFL. Holy shit! That’s great news Rams fans! After that realization I’d have to say anything less than 16-0 will be unsatisfactory. Maybe not as upsetting as being so publicly reviled that you can’t even pay someone over a thousand dollars to switch plane seats, but still bothersome. 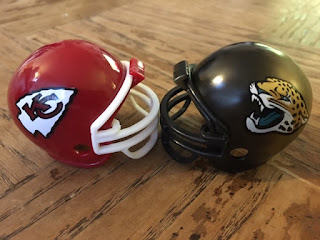 What an intriguing match-up here. The Chiefs and their top offense from a year ago travel to Jacksonville to take on a Jags defense that has finished in the top 5 in points allowed in consecutive seasons (and by top 5 I mean top 5 fewest, but that sounds confusing ... you get it right? Right?!?). You’ve also got the reigning MVP, Patrick Mahomes against a former Super Bowl MVP, Nick Foles. These are also great food cities. Of course Kansas City brings their BBQ to the table, while Jacksonville is known the world over for their famous gator biscuits. So who will prevail? Normally a great defense beats a great offense, so advantage Jags. And we all know that nothing ever beats a gator biscuit. Advantage Jags, again. Still, I’m just not ready to pull the trigger on this upset, mostly because I’m now remembering that Jacksonville was awful last season. In fact, the Jags are a lot like a gator biscuit: when they’re good they’re hard to beat, but when they’re bad the whole city has to vomit. With all that in mind I’ll take the Chiefs in a close one. 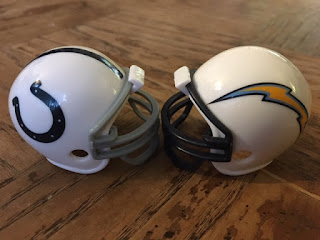 Over the past couple seasons the Chargers' temporary home (now named Dignity Health Sports Park) has become notorious for being populated by a raucous majority of visiting fans. While this Sunday’s crowd may feature a large contingent from Indianapolis I have a sneaking suspicion that they won’t be so raucous. Having your franchise quarterback disappear into thin air will do that to a fan base. As a result, I expect the vibe in Carson to be something akin to an energy vacuum. I don’t know if energy vacuums actually exist, but one will on Sunday. Also, I’d just like to point out the irony of the name of the Chargers’ stadium now involving the words “Dignity” and “Health” two things that this franchise is hardly known for. May they be blessed with at least one of the two on Sunday. 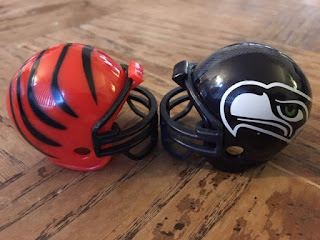 The Bengals are one of only two teams in the NFL that Russell Wilson has not defeated. Of course, because these teams are in different conferences it means they only meet once every 4 years, so Wilson has only had one crack at Cincy, a 27-24 overtime loss in 2015. After the game Wilson said (and I quote), “I will have my vengeance. I don’t care if it takes me 1,428 days, the Bengals will be conquered by my hand.” Amazing that Russell correctly predicted the exact amount of time between games, especially while caught up in the emotions of a hard-fought loss, but I guess the guy is just that good. Look for Wilson to get the monkey off his back and finally be free to move on with his career. 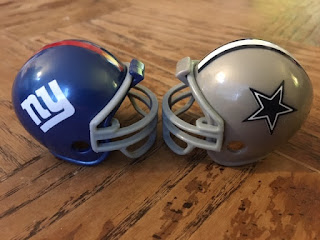 The Cowboys shouldn’t have been surprised that Ezekiel Elliott wanted a bigger contract, he’s been asking for more after ever big run from day one. People thought it was just a fun little celebration. No, it was a constant contract negotiation, he was literally saying “Feed me more money.” Now, as for why he wants to eat the money, I don’t know. Currency is notoriously filthy, and ingesting the stuff renders it useless. So while his financial planning may be questionable, his tactics are to be admired. I wouldn’t be surprised if a player in the near future were to have a big first half and then hold out at halftime for more money before agreeing to play in the 2nd half. It worked for The Ultimate Warrior at SummerSlam ‘91. Of course, he was fired immediately after the show, so maybe it’s not the best idea. But the in-game celebration negotiation is still valid. 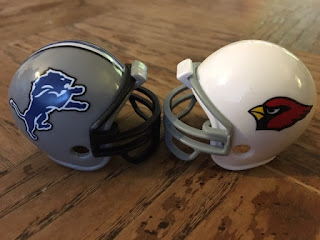 Remember in 2013 when Chip Kelly debuted as the Eagles coach and Philly ambushed Washington in the opener? They scored like 56 points (hmm, I looked it up and it was only 33, that’s a let down) and put the entire league on notice: the offensive revolution from the college ranks had come to the NFL! Of course, The Eagles proceeded to lose their next three games and Kelly was out in Philly after three seasons with only one playoff appearance. I bring this up because the Cardinals have turned over their organization to a college coach with an extreme offensive approach who employed that game plan to much less success than Kelly did before moving to the pros. So will new Arizona coach Kliff Kingsbury continue to follow Kelly’s career trajectory, albeit at a less-pronounced arc? You’ll know when the Cardinals shock the world and put up 50+ on Detroit. Or they’ll look completely lost and fall flat on their face. I’ll aim for somewhere in the middle. 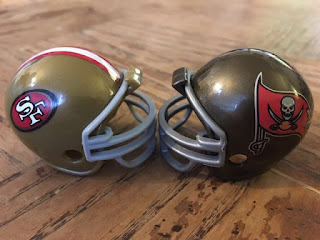 Bruce Arians is back to haunt the NFC West once again. No he’s not coaching in the division this time, but the Bucs do have all of Arians’ former rivals on the schedule this year. He’s the red-faced ghost of season's past. First on the docket is a Niners team that is now helmed by Jimmy G, and it’s officially his time to shine. Sure we all said the same thing last season, but Garrapolo’s knee had other ideas. Though have we considered that maybe Garoppolo’s place isn’t on the field? Maybe he’s meant to stand on the sidelines without a helmet. After all, some faces are not meant to be masked. 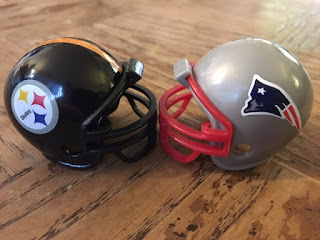 We've seen this match-up at least once a season for the past 28 years (sic), so I'm not necessarily thrilled by the prospects of watching it again. Of course I'll be tuning in, but just so I can listen to the best in the biz Cris Collinsworth. Let's get his insight on the game now:

Wow, he actually made a pick. I have no choice but to agree. 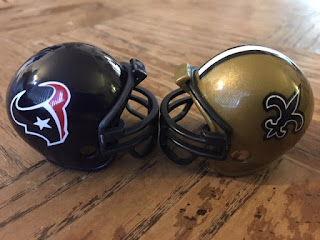 Hooo doggy, it’s a sweltering Monday night down in Nawlins, and dat don’t bode well for dem Texans! You doan juss geaux down dere and get a Week 1 win ... Sorry, I just fainted into a bowl of gumbo. When I woke up those first two sentences had already been typed out. I don't know how. It’s close enough to making sense, and I’m starved for content, so I’m going to keep it in. That being said, I must humbly disagree with my unconscious Cajun mind. It’s not as difficult as one might think to win a Week 1 game in the Super Dome. In fact, the Saints have gone 1-3 in their last four opening week home contests with losses to the Bucs, the Raiders, and Washington. What’s more, New Orleans is also 1-7 in their last eight openers regardless of location. That’s too much data to be just a coincidence. And clearly their opponent, the Texans, have everything figured out ... Regardless, I’m following the trend. 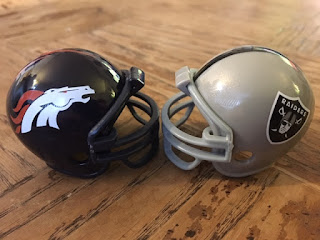 If you watched this season of Hard Knocks you probably witnessed, and were unimpressed by, Jon Gruden counting backwards from 100 by 3. It was hard to fathom why Gruden considered this an interesting trick, or even a trick at all. But it was a fascinating insight into the mind of a man that is making $10m a year. Come to think of it though, using the aforementioned counting method could actually be useful in helping Gruden figure out how many years it will take him to get to 100 wins in his second Raiders stint.