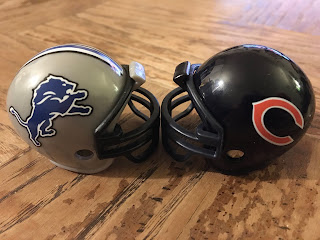 I know the trade deadline has passed, but wouldn’t these teams be better off if they swapped quarterbacks before the game? Stafford could give the Bears some semblance of competency at QB for the first time since ... Jim Miller? I’m only sort of joking. It’s probably too late to save this season, but he’d definitely give Chicago a better chance for the next couple years. Meanwhile, the Lions could take Trubisky and bottom out, then cut him loose because, unlike the Bears, they don’t have the emotional baggage of having traded up to pick him 2nd while DeShaun Watson and Patrick Mahomes were available. Now that I think of it, in this scenario the Lions basically get the privilege of cutting one quarterback and trading theirs to a division rival. So maybe it doesn’t make a ton of sense for Detroit. But hey, sometimes NFL teams do nonsensical things, like draft Mitchell Trubisky 2nd overall, and then insist that he’s good for three years. 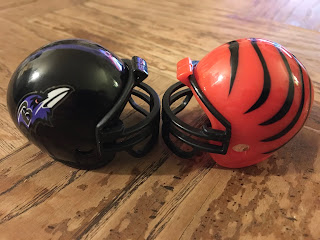 During their bye week the Bengals announced that they were benching Andy Dalton. Also in their time off they became the league’s only remaining winless team. Now that that’s the case they shouldn’t start backup QB Ryan Finley; instead they’d be better off turning to Who Dey, their mascot. And to be clear, I don’t mean  the human being inside the Who Dey mask, I mean the full Who Dey, costume and all. He’s already been issued a uniform, looks like he wears #1, so that’s one less logistical detail to worry about. Seems a little self-absorbed as far as number choices go, but that’s neither here nor there. The point is, throw out somebody even worse than Finley to ensure that you lock up that #1 pick in next year’s draft. And hey, if Who Dey shows some flashes of brilliance then maybe you pivot your future plans. You could stumble into a heckuva player! I doubt he’ll be able to effectively grip the ball with his cartoonish fabric paws, but who knows?!? 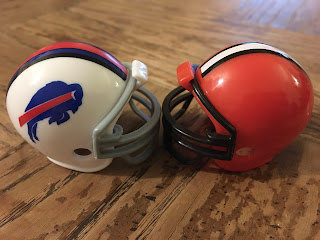 Both of these teams score about 19 per game. So there ya go, that’s what they have in common. Their differences are more plentiful, with most of them coming on the defensive side of the ball. The Bills only give up 16 points a game while the Browns surrender 26. That’s a simple and easy way of explaining why each team has a 6 and a 2 in their respective records, but those numbers are decidedly not in the same place. And hey, I’m all about using simple and easy metrics to pick these games, but I still figure Cleveland has to win a game sooner or later, and Buffalo’s record is a little inflated by their schedule (opponents’ combined record: 22-46).  They’ve simply beat the crummy teams ... which I guess is exactly what the Browns are. But just as we should be slightly skeptical of the Bills’ record, perhaps we can forgive Cleveland for theirs. The teams they’ve played so far this season are a combined 42-25. When you take that into account, are these teams really so different? Well yes, one of them has a terrible coach. Still though, a broken clock has to find a nut twice a day, right? 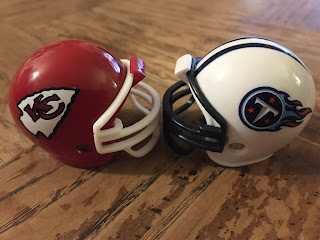 After picking up a thrilling win over the Vikings last week, the Chiefs could be tempted to let Patrick Mahomes take an extra week to heal up and roll one more time with Matt Moore. After all, Moore has played well in a close loss to Green Bay, and that aforementioned W against Minnesota. However, both of those games were played in Arrowhead Stadium, and this week KC has to go on the road. You don’t just stroll into Nashville with a backup QB and expect to come out with a win. Not in the hostile environment that is ... sorry, checking to see what the name of the Titans’ field is ... Nissan Stadium! Like an Altima on the freeway, this place just ain’t safe. Tennessee is a dominant 2-2 at home this season, so perhaps it wouldn’t be advisable for the Chiefs to not press their luck. Of course, if Mahomes can play at full strength KC should win comfortably. But if not, get ready for a one-QB pile-up at Nissan. 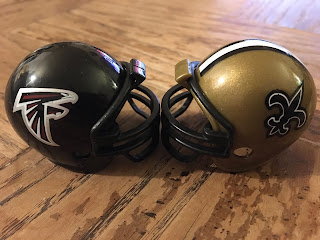 Even though they’re 7-1 it sort of seems like the Saints are flying under the radar. Meanwhile, the Falcons are also under the radar, but that’s only because they plummeted into the ground weeks ago and are now lying there dead and rotting. This is a rivalry game, so I suppose anything can happen. But I don’t know if “anything” encompasses getting in a time machine and rescheduling this game to Week 1, so that in can be played in a world where the Falcons still have hope and/or any sort of motivation. 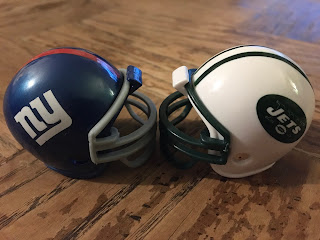 This match-up, played annually in the preseason and once every four years when it counts, between the two tenants of MetLife Stadium is charmingly referred to as the Snoopy Bowl. However, with these teams entering Sunday with a combined record of 3-14, I hereby submit that this year’s contest be known as the Poopy Bowl. New Yorkers often boast that they live in the greatest city on earth; this game could single-handedly derail their argument. Sure they’re playing in New Jersey, but these teams represent the biggest market in the NFL and on Sunday they’ll join together to form the biggest suckhole that Week 10 has to offer. In fact, this game probably won’t look much different than those preseason match-ups. Lots of sloppiness, plenty of unknown players, and a half empty crowd by the middle of the fourth quarter. Perhaps the Snoopy Bowl and the Poopy Bowl aren’t so different after all. And hey, one comes from Peanuts, the other occasionally comes with peanuts. I’m very sorry. 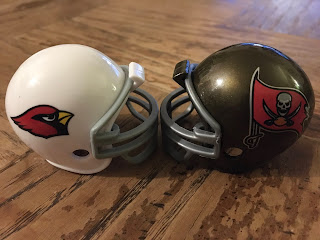 This game sees former Cardinals Coach Bruce Arians going up against the franchise he nearly guided to the Super Bowl. I mean, his team was beaten by 34 points in the NFC championship game, so they weren’t that close to the Super Bowl, but you get what I’m saying. Arians' M.O. then, as it is now, was pushing the ball downfield with a vertical passing attack. Meanwhile, new Arizona coach Kliff Kingsbury’s strategy is just passing in general, so this one could get a little wild. Also, both of these defenses have shown that they’re not opposed to giving up large quantities of yards and points. This game just screams shootout. That being said, for anyone planning on attending, do not scream “shootout” when you’re at the actual game. That is taken very seriously in our current climate. Well, maybe not in Florida. 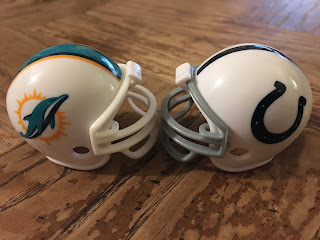 The Dolphins won! Those morons! What where they thinking? Just weeks ago they were coasting to a winless season and looking like one of the worst teams ever. Then they decided to reinsert Ryan Fitzpatrick as their starting quarterback and everything went downhill. First they almost beat Washington, then they had first half leads over Buffalo and Pittsburgh, and now this. What did they expect, Ryan Fitzpatrick to go out and lose games? That man doesn’t know how to fail! I mean, ok, sure he does it regularly, but he also routinely pulls off upset wins and drags inept teams into somewhat competent performances. Competency is exactly what Miami’s front office was trying to avoid. They should’ve cut Fitzpatrick at halftime last Sunday, it would’ve been the only way to avoid this catastrophe. And now with Brian Hoyer possibly starting at quarterback for the Colts this game it’s quite possible that Fitzpatrick leads the Dolphins to unfathomable heights: a winning streak. I still doubt it will happen, but like anything involving Ryan Fitzpatrick, I wouldn’t put it past him. 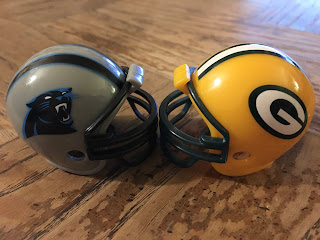 With Cam Newton now officially out for the season with his foot injury, Kyle Allen is the quarterback of the Carolina Panthers. And something tells me that that’s going to scare the crap out of him. Sure he was doing well filling in, but things were casual then, everybody was just having fun! But now that it’s official? I don’t know, maybe things are getting too serious for Allen. He’s a young man, he doesn’t need this kind of pressure. Now the Panthers are talking about spending the weekend together in Wisconsin? This is moving really fast. Also, I heard Ron Rivera talking to reporters, saying that the goal of all of this was to get a ring, maybe even as early as February! Kyle man, you gotta get out of there bro, Carolina sounds clingy. 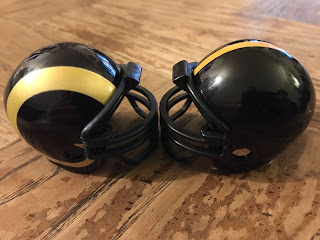 It seems strange that these teams are only one game apart entering Sunday. I double-checked though, and it’s actually true. The Steelers have won three in a row and, based on their remaining schedule, could definitely get to 9-7, even with a loss here. Whoops, I guess I just revealed my pick midway through the blurb. You didn’t just skip ahead after that did you? Hello? Hmm, looks like it’s just me here. I can write whatever I want. Finally I can admit that I don’t even like football. I waste so many Sundays every fall watching this crap just so I can write this blog. If only it weren’t so popular I could pull a Deadspin and quit. Sure they said it was about principle, but I think they were actually just tired of sports. I feel ya guys, I ... Oh, you’re back. Uhh, here’s the score! Just what you came here for, right? (You selfish son of a ...) What’s that? Yeah, yep, here it is: 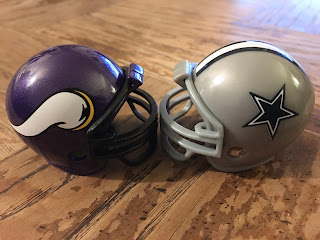 The Cowboys are back on Sunday Night Football for the third time in seven weeks. Fun! Let's see if the man calling these games has as much Dallas fatigue as me:
I feel compelled to alert the authorities. 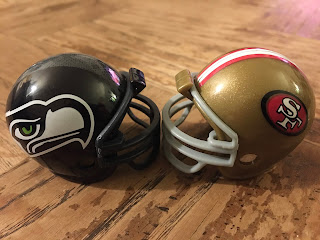 At 7-2, it’s fair to say that the Seahawks have had a good start to the season. However, most of those wins have come by a slim margin against sub .500 opponents. Seattle’s remaining schedule is literally the most difficult in the league, so we’ll soon find out if they can keep the magic working against legit competition. But hey, as Ric Flair says, “To be the man, ya gotta beat the man.” Except wait a minute, no, that’s not true in the NFL. You can just stockpile wins against lousy bums and skate into the playoffs. Style points don’t exist. C’mon, bring on more losers! Alright fine, I guess it’s time to get serious. Well there’s nothing more serious than a Monday night game against the 8-0 49ers. Actually, Daniel Day Lewis telling you you have terminal cancer would be more serious, but this game is up there. The aforementioned Ric Flair was notorious for getting bodyslammed off the top rope each and every time he attempted to set up an aerial maneuver. The Seahawks may be wise to learn from Flair’s mistakes and keep to the ground. The Niners have been occasionally vulnerable defending the run, and if Seattle can move it effectively with their rushing attack they stand a decent chance. Then again, any team in any game stands a decent chance if they can run the ball effectively. Why are we wasting time? You know how this goes.