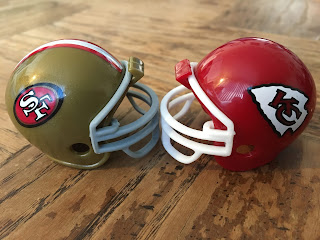 It’s every football fan’s favorite time of the year, Super Bowl Sunday. Unless your team isn't playing, which is the majority of football fans. I especially feel trepidation whenever the Super Bowl approaches, because it means football will soon be gone for over half a calendar year. That’s why I prefer Week 9, when we're right in the thick of things. Gleefully floating down a river with only football visible on either horizon. But now we’re quickly being thrust forward by the roiling churn of said river, approaching its precipice, seconds away from plummeting down a waterfall into a seven month long struggle to stay afloat in a sporting landscape in which we won't have 10 hours of appointment viewing every Sunday. Before entering into this frightening reality together we have one more game to watch, and surprisingly it involves the 49ers and Chiefs.
Surprising for different reasons though. For San Francisco, while their franchise is steeped in Super Bowl tradition, their very recent history has not been so successful. In fact, their 12 total wins over the three seasons preceding this one are the second fewest for a Super Bowl participant in the history of the game. The only team to have fewer? The 1981 San Francisco 49ers (10 total wins) who would go on to win Super Bowl XVI and begin their run as the team of the decade. Does that mean that we could be on the cusp of another dynastic run from the Niners? Probably not. It's likely just a coincidence, but a fascinating one, right? Hopefully you said yes, because hunting down that stat was by far the most research I've done all season.
Kansas City has been a perennial playoff team since hiring Andy Reid as head coach, so it's no great shock to see them here. However, the Chiefs franchise has not been to the Super Bowl in 50 years, so just seeing their name in this spot is an odd sensation. Odd but exciting. Something new that you never knew you always wanted. Something that has awakened a dormant nook of your soul. You're alive again, and you know you'll never be able to return to the crushing monotony of your old reality. Your spouse and children might miss you initially but they'll get over it eventually. Whoops! Got carried away there for a second. Let's move on.
So who wins? The 49ers, who ran their way past two NFC North teams to get here? Or the Chiefs, who threw over a couple of AFC South squads to touch down in Miami? Before I decide, I should probably check in with the best NFL analyst Primm, Nevada has to offer. Here's Cris Collinsworth's take:
Stay safe CriColl. Much has been made about the Chiefs' 50 year Super Bowl drought, but I've not heard much discussion about the fact that San Francisco hasn't won it all since Super Bowl XXIX. That's 25 years to you and me. So when it come to these ignominious anniversaries, one is silver and the other gold. Ironically enough, in this case the gold doesn't belong to the 49ers. That's gotta be a bad omen, and omens are the driving force in most of my predictions. Speaking of omens, the reigning champions in the other three major sports: the Blues, Raptors, and Nats, all won their first titles in franchise history. 50 years isn't forever, but it's close enough.