Some variation of the following phrase gets thrown around quite a bit in the NATIONAL FOOTBALL LEAGUE: "When we're on our game, we feel like no one can beat us." But does that really mean anything? Is there any team in the league that feels like when they're playing at their best that they're still going to lose? If you're playing at your best doesn't it imply that you're beating the other team? That being said, the Seahawks seemed to be "on their game" last week, and it sure didn't look like anybody could beat that team that day. Seattle's offense especially has looked nearly unstoppable recently. They've scored 19 touchdowns over the last four games after only scoring 16 touchdowns over their first eight games. Clearly something has clicked offensively. Look for it to keep clicking on Sunday, but not like an annoying click, a really cool, badass click.

In his return to Philadelphia LeSean McCoy will go head to head with the man he was traded for, Eagles' MLB Kiko Alonso. Their careers are now inexorably intertwined. With that in mind. what if they collide in the hole on Sunday and swap bodies like countless movies before them. How long would it take for us to realize what had happened? Come to think of it we'd probably catch on before the next play when they each ran back to the wrong huddle. Philly is coming off a big victory over New England, but one win does not totally de-lousy a team. I'll go with Buffalo. 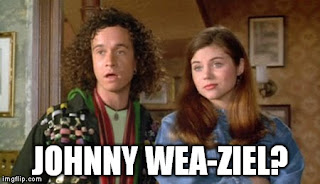 Johnny Manziel is back as the Browns' starter, and apparently on a short leash according to head coach Mike Pettine, who said that repercussions would be severe if Manziel errs off the field again. Is it me or does it seem like Pettine would rather Johnny screw up so that he would have an excuse to get rid of him? What I'm getting at is that we may be headed toward a Son-in-Law style blackmail scenario in which a drugged Manziel ends up naked in a barn with a buxom vixen. If Tiffani Amber Thiessen is seen in Cleveland at any point in the next few weeks, we'll have our answer.

There are 11 morning games this week, meaning we'll have to ignore a few come Sunday. This one is a prime candidate. It would have been a bit more interesting if the Lions had won last week, but apparently they weren't interested in stopping a Hail Mary. In case you hadn't heard, they were defending the sideline on an un-timed down. Even more egregious, however, is the fact that they didn't put Golden Tate in on defense; we know he's good at catching Hail Marys, seems like a no-brainer. Despite Detroit coming off a devastating loss I can't in good conscience pick the Rams, a phrase I'm almost certain I've typed before.

At this point no result would surprise me with the Bucs' remaining schedule. They could go 0-4, 4-0, or anywhere in between and I wouldn't be shocked. Now, if they managed to go 5-0? That would be something else.

Did you know that when these teams met last season it resulted in the only 16-11 final score in the history of the NFL? Well that's a fact. And I can only assume that they'll make history again this Sunday. After scouring the record books for never-before-seen final scores I've settled on the following ...

The Steelers' offense has been putting up some huge offensive numbers, totaling 143 points in their last 4 games. As impressive as they've looked, I have to believe that Antonio Brown hurt his balls when he jumped into the goalpost stanchion after a punt return touchdown on Sunday night. Most wide receivers don't wear cups, because it limits their mobility, so there's no way Brown made it out of that unscathed. I suppose I understand where the WRs are coming from, but I know if I were on the field I would wear all the protection I could get. Hell, I wear a cup in everyday life, just in case. Doesn't hurt the bulge either. This one's a 3P (Possible Playoff Preview), so watch closely. I think Pittsburgh's hot streak continues.

Tis a somber day, for Matthew Hasselbeck hath finally lost. However, I didn't get a chance to see much of the game, so if I didn't see it, did it really happen? It's like that old saying, if a tree falls in a forest and millions of people hear it, but I don't, did it make a sound? I say no. MH will make plenty of noise this Sunday as Indy gets back above .500.

After a 1-5 start the Chiefs have won 6 games in a row. Looking ahead at their remaining schedule it seems more than feasible that they'll extend that streak to 10 games and finish at 11-5. Of course, any discussion of such a hot stretch brings to mind that famous Vince Lombardi quote, "10 game winning streaks are a thing of beauty. If I had my choice I'd win 'em all. That might sound greedy, but I say greed is good. And you can quote me on that one baby!" That was from an interview with a young Oliver Stone, and guess what? He did quote him on that!

Both teams are 5-7, yet one is currently sitting in playoff position while the other has only a very slim chance at playing in the postseason. This doesn't seem fair until you consider that it's based solely on geography, then it makes total sense.

If you look at the Panthers' four remaining games it's not unlikely that they would win each of them in a vacuum. But, as I've said in years past, games aren't played in vacuums; nobody would be able to pass. I still think they'll slip up at least once, but not in this one.

Brock Osweiler is now 3-0 as a starter, but let's be honest, he's not exactly setting the world on fire. If he were he would surely be arrested, or at the very least pursued, for arson. Denver's defense is good enough that he really just has to limit his mistakes and hope for the best. But hey, isn't that what we all do in our everyday life? Is Brock Osweiler that different from you or I? He's just a man trying his best, and damn it, I can't fault the MFer for that.

The Packers are a competent Hail Mary defense away from having lost 5 of 6. Instead they're now leading the NFC North and have a good shot at extending that lead to one game with Matt Cassel and the Cowboys coming to town. Though, the last two teams that visited Lambeau came out on top, so a Dallas upset wouldn't be out of the question. It also wouldn't be out of the question for Dez Bryant to get called for a facemask penalty against Aaron Rodgers while making a potentially game-winning catch. I'm not sure how exactly it would happen, but I wouldn't be surprised.

If you saw last week's video, you'll know that Cris Collinsworth's return seemed questionable due to his emotional devastation following Tony Romo's season-ending collarbone injury. But good news everyone, CriColl is back, and he hasn't missed a beat:


Ok, I'll admit it, that was merely me attempting to do a Cris Collinsworth impression. I don't know what to say, he's been unreachable for the past week. I'll do my best to find him, but if I don't I may have to explore other options ...

A few weeks ago, I suggested that the Giants may have another run in them akin to their championship seasons of '07 & '11. They haven't won since. In other words, they're sucking us all in again! Clever girls.