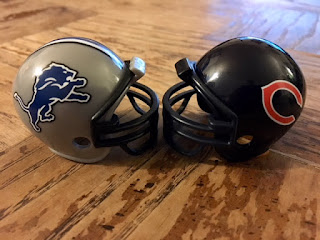 After winning two games with a comically low amount of pass attempts (23 total) Mitchell Trubisky has been let loose the past two weeks to less than mixed results. So, stirred results? He’s averaged 34 pass attempts in consecutive losses. Sure you could argue that if the Bears get behind it leads to him having to pass more, but how about this: they get behind, and just refuse to throw. Stick to the game plan no matter what! Down by 17 in the 3rd quarter? Keep running! I mean the team with more rushing attempts almost always wins; this is too easy! And if you’re losing yards with the run, just kneel on the ball. Basically, just make sure Trubisky throws it no more than 10 times. That’s your winning formula. 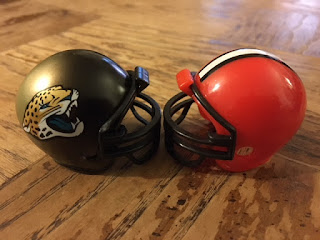 Poor Browns, they were actually up 24-17 late in the 3rd quarter last week before giving up 21 unanswered points to fall to the Lions. Even when you think they’re getting it right they manage to screw it up. It’s like a puppy that finally poops outside but then tramples through his own mess and drags it back into the house on its paws. Likewise, after an 0-5 start in Cleveland it’s safe to say the Browns aren’t house-trained. Meanwhile the Jags have actually been better on the road this season, outscoring opponents by 17 per game. When nothing has to give, it usually doesn’t. 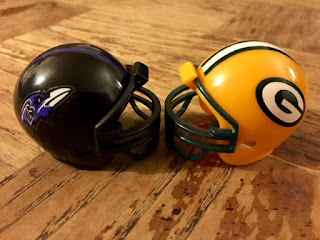 Believe it or not the Ravens have the highest average margin of victory in the league at almost 22 points per win. Unfortunately for Baltimore they’ve only 4-5. These guys should save some of those points! Obviously that’s not possible ... but what if it was? What if they could declare during a game that any points they score from there on out only count toward the next game? They’d have to be certain that they were going to win the current game while also considering who was next on their schedule and how many bonus points they may or may not be entering that game with. Of course, this would also make the current game more compelling because let’s say they decided to start rolling over their scoring when they were up 21, but then the losing team starts coming back. Sorry Ravens, better start playing D! So why doesn’t the NFL adopt this rule?!? Maybe because it’s stupid and not fair to penalize teams for having to play an opponent coming off a blowout? Yep! That’s exactly why. Consequently the Ravens will just have to start trying to win every game by 22. 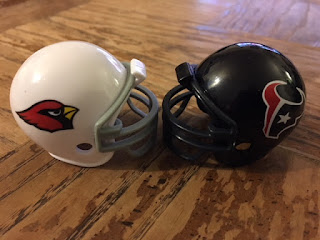 Sunday (most likely) marks the long-awaited return of Blaine Gabbert to an NFL field. Ok, ok, everybody calm down. I know, I’m like you, I could sit here and reel off my top 5 Gabbert moments, or tell you exactly where I was for each and every one of his 38 career TD passes. And I’m sure we’ll all have some trouble sleeping on Saturday night in anticipation of what’s to transpire Sunday. But let’s pump the brakes and relax just a bit, this is Blaine’s first start with a new team, it might take some time for him to ... Aw, who am I kidding? He’s gonna go out there and sling it like he did during his glory days in Jacksonville. You can scrap my Christmas list Santa, because we've already received the gift Gab. 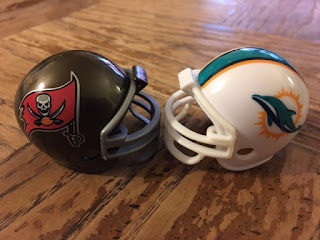 This is the game that was originally scheduled for Week 1 but delayed due to a hurricane. As a result these teams are in the midst of playing 16 straight weeks, but if you gave them both the option right now they might go ahead and tap out at 10. Are the Dolphins technically only one game out of a wild card spot in the AFC? Yes, but can you fathom Miami actually making the playoffs? And no, you can’t create some fantastical scenario in which all the other teams get mono, or Jay Cutler starts giving a shit. It’s hard to imagine, right? What’s also hard to imagine is anyone, even within Florida, watching this game without money, or body parts riding on it. 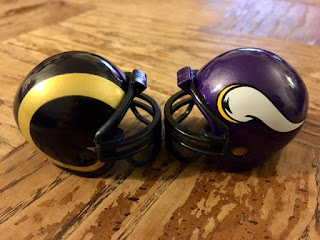 Who would’ve thought that this would turn out to be a pivotal game in the NFC? Me, that’s who. In fact, here’s what I wrote in an unpublished excerpt back in early September, “Keep an eye on that Rams/Vikings game in Week 11, it could end up having major playoff implications. But back to what I️ was saying earlier about that screenplay I'm working on; so it’s a buddy-cop comedy starring Louis CK and Kevin Spacey ...” Ohhhhkay, so I didn’t have it all figured out, but who among us does? Just look at the Vikings, they’re 7-2 but can’t quite figure out what they should do at starting quarterback. Stick with Case Keenum, who’s done an admirable job this season, or insert Teddy Bridgewater, who hasn’t been able to play in a game since January of 2016? Some are wary of a player who’s been on the shelf for 22 months, but I say that’s nothing, I just ate a Top Ramen package that expired 6 years ago. I️t doesn’t go bad! However, I fear we might not say the same thing about Case Keenum after Sunday. 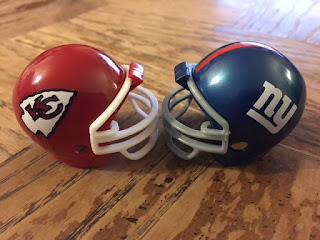 Last week the Giants did what no team in the NFL has been able to do this season: lose to the 49ers. After the loss New York coach Ben McAdoo managed to do something even more difficult: keep his job. Look, I️ know he went 11-5 as head coach last season, but the Giants are 1-8 now, they’ve clearly given up, and again, Ben McAdoo looks like a lame William Forsythe. Considering he’s half the man, let’s go ahead and call him Twosythe from now on. So how much longer can Billy Twos last? I’ll set the spread at 35; meaning if the Chiefs win by more than that he’s gone. Any less and he’ll probably survive for another week like the cockroaches that are living in his mustache. That’s not just wild speculation, I have it on good authority that there are multiple cockroaches making residence within his facial hair. 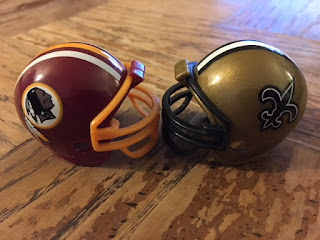 Washington has been through a terribly rough stretch of their schedule over the past month: @PHI, DAL, @SEA, MIN, and now @NO. It’s a true gauntlet, and when they come out on the other side of it their playoff aspirations may be mere daydreams. But when all is said and done will they be better men for it? Absolutely not. Those playoff shares are serious cash baby! Say what you want about testing their mettle, but an indomitable spirit ain’t gonna buy you a new rug. I say the Saints win their eighth in a row, while the Skins get to look forward to a game against the Giants next week. 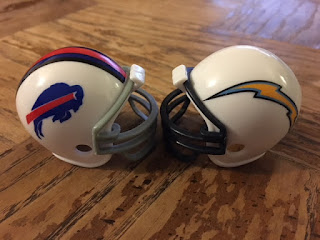 Last week the Chargers and Jaguars “competed” in a game that was akin to a John Lackey lookalike contest, in that no one wanted to win it. Eventually though, Jacksonville did, and the Chargers and everyone who watched was worse off afterward. Speaking of not wanting to win games, the Bills have looked abysmal as of late, giving up a total of 81 points in consecutive losses to fall to 5-4. Despite still being in wild card position Buffalo has decided to bench starting quarterback Tyrod Taylor in favor of (I believe) the creator of the urban sombrero Nathan Peterman. As for LA, Philip Rivers may have to miss the first start of his career due to being in the concussion protocol. So we could be left with a Nathan Peterman/Kellen Clemens match-up. Phil Rivers isn’t the only one whose head hurts. 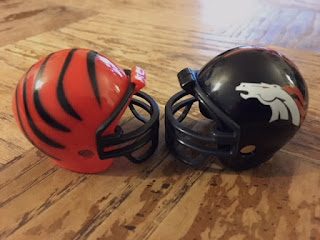 Here are two teams who came into the season with playoff aspirations. Well if playoff aspirations were candies and nuts then they’d be just like ifs and buts. But unfortunately for these teams they’ve had no sundaes on Sundays this season. Oh boy, this "metaphor" is getting worse as it goes, much like the Bengals and Broncos’ seasons. Denver has lost 5 in a row and their once vaunted defense has given up a total of 121 points over the last three games. Sure maybe some of those were from scores by opposing defenses, but I didn’t do that research, and you what, I shouldn’t have to for this game. I guess I'll go with the home team? Let's move on. 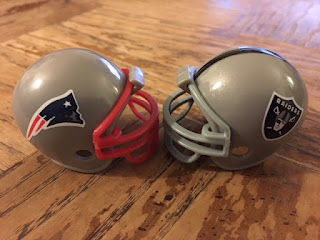 This game will be played in Mexico City, and marks the first time the NFL has ventured south of the border since the infamous Monday night game between the Texans and Raiders last season in which Brock Osweiler complained that a fan’s laser pointer was being shined in his eyes. One can only wonder what sort of distraction the people of Mexico City have in store for Tom Brady this time around. Air horns? You betcha. Flares? Absolutely. Bags of urine? Undoubtedly. But keep in mind, this is Tom Brady they’re dealing with, not Brock Osweiler, they'll need to pull out all the stops to get under his skin. That’s why they’ve hopefully made into reality what I’ve imagined in my head, and that’s a urine laser. And yes, that’s exactly what it sounds like, a laser pointer that shoots a urine laser hundreds of yards in a straight line. Hey Brady, good luck running the offense with an awesome stream of piss distracting you while it shoots down the sideline ... Oh wait! Better yet, they can just spray it right in his face! That'll be way more distracting. 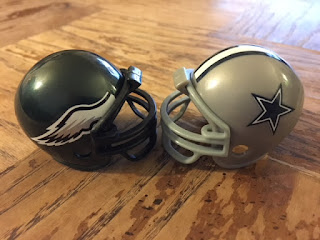 After a couple of subpar Sunday night matchups in recent weeks, we finally have an intriguing contest. But don’t take I️t from me, here’s SNF analyst Cris Collinsworth:

Anybody else feel like he's making some of these stories up? 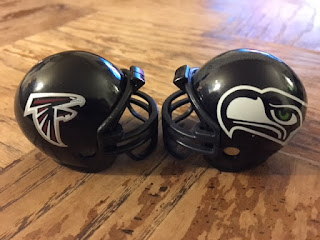 A lot of injury concerns going into this one. For the Falcons, running back Devonta Freeman suffered his second concussion of the season last week and is likely to miss this game, and possibly more in the near future. I’m sure he’d like to play, but if he were savvier he would have just blown off the tests like Russell Wilson did last Thursday in Arizona. Now that’s the reckless, short-sighted heart of a champion right there. To be fair, apparently Wilson did pass the concussion tests after the end of the drive, but I’m pretty sure it’s supposed to operate more like a pop quiz rather than an exam that you prepare for. Regardless, Wilson will be ready to go on Monday; the same cannot be said for a handful of other key Seahawks however. Will this pile-up of injuries become an insurmountable obstacle? Not if the rest of team simply follows Wilson’s example: you’re not injured if you really don’t want to be.