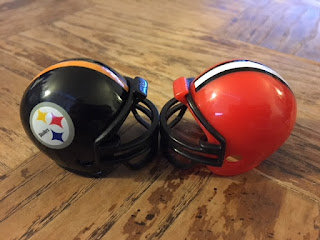 Bud Light has positioned 10 “Victory Fridges” in Cleveland bars that will be unlocked immediately after the Browns win their first game of the season, providing free beer for any fan on the premises. I think this is such an ingenious promotion that I’m planning something similar for myself. I’m going to start drinking beer at the beginning of this game and continue to do so each Sunday until the season ends. Also it won’t be free. So it’s not exactly the same thing, but just as creative if you ask me. I actually think the Victory Fridges will be opened this Sunday; not because the Browns are going to win, but because surly Clevelanders will grow impatient and break into each and every one of them. 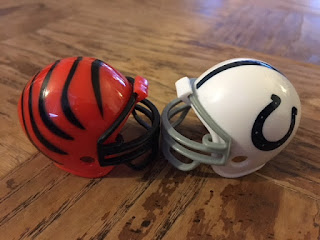 Finally we get to see the Bengals and the Colts tangle for the first time in ... 10 days? Bafflingly these two teams closed the preseason against each other on August 30th and here they are facing each other again in Week 1. Who’s idea was that? This is the NFL, it’s not some Rec league where you have to play the same opponent twice because there aren’t enough teams. I get that they’re close geographically, and that’s a factor for preseason games, but I feel like nobody even checked the schedule before this happened. The sides probably didn't learn much from each other in that final preseason game, considering most of the starters didn’t play, but come on, somebody tell me the reason! I’m losing it over here, just give me the answer! Anyway, I’ll pick Cincinnati because they obviously have the Colts' number based on that preseason win. 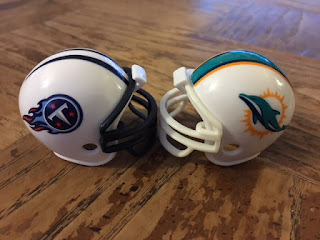 This was one of the hardest games of the week for me to pick. Not because it’s evenly matched, but because every time I glance at it I just think, “Yuck” and move on. Perhaps not coincidentally Jay Cutler did the same thing in regards to playing football ever again. It was the obvious move with Ryan Tannehill coming back from injury and Cutler’s disdain for competitive sports. Even with an interested human back under center the Dolphins don’t figure to be much of a factor in a weak AFC where a team like the Titans is coming off a trip to the Divisional round. Speaking of Tennessee, they revamped their uniforms in the offseason, and the results are ... pretty much the inverse of their old ones. It’s a decent effort, but ultimately pretty boring, so basically the epitome of the Titans. 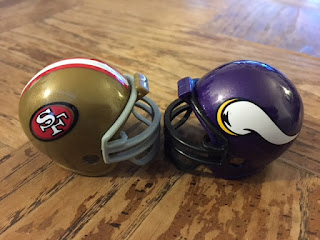 Much has been made of Jimmy Garappolo being undefeated as a starter, but what about the fact that he won 2 Super Bowls as a backup? Is it me, or does it make more sense for the 49ers to bench him? That seems like the true path to a title. Many think the Vikings’ path may have been cleared by the signing of Kirk Cousins, a man who has gone 26-30-1 as a starter. Is it wrong to be skeptical of Cousins’ elevated status? You could argue that he’s not to blame for that sub .500 record because Washington was pretty lousy when he was there. But isn’t that the point, that they were lousy when he was there? I’m not fully sold on him, and I won’t be until he wins multiple MVPs and Super Bowls. Sorry, just being fair. I will pick him to win this week though. 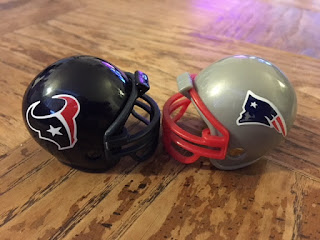 In his first five seasons JJ Watt played in all 80 of his team’s games. In the last two seasons he’s played in just 8 of their 32. At a glance it would seem that he’s simply become injury prone. However, I think it’s possible that he’s outgrowing his own body in some sort of prolonged shedding process. As a result it’s much harder for him to play football. So is his man molt complete? Only time will tell. But he’s healthy for now, which means he should be a factor on Sunday. Also figuring to be a factor is Houston’s 2nd year quarterback DeShaun Watson, who is returning from an ACL tear and lit up the Patriots in a Week 3 matchup last season. Can he do it again? Sure, why not. UPSET! 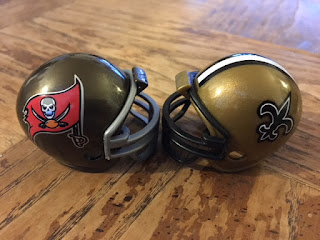 Jamies Winston has been suspended for the first 3 games of the season for being a scumbag. That could be considered a heavy blow to the Bucs except for the fact that they were much better at winning games when Ryan Fitzpatrick was their starting quarterback last year. It’s also not that impactful because Tampa was and is going to suck regardless. So there’s a bone for ya Bucs fans, cheer up! Just kidding, nobody in Tampa reads this blog; most of the internet, isn’t available in Florida. 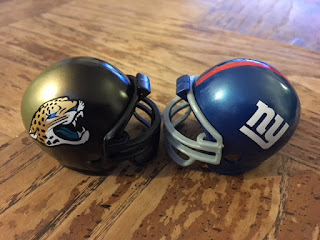 This offseason Eli Manning was among the many players criticized by Jags corner back Jalen Ramsey in a GQ interview. Ramsey said Manning’s success is due to playing with Odell Beckham, Jr., a player who was not on the Giants  roster either time they won the Super Bowl. So maybe Ramsey isn’t a bona fide NFL historian, but he doesn’t have to be, that’s not his job. At least not that I’m aware of. Is there a chance he does some freelance work as an NFL Films archivist to earn some extra cash? Sure. I can't rule that out. I’m just saying I personally have not heard that that’s the case. Jacksonville nearly made history last season by reaching their first Super Bowl, while the Giants made history of their own by being the worst team in franchise history (still waiting on a verification of that stat from Jalen Ramsey). Look for the Jags to springboard off their surprising performance last season and come out with some swagger in an opening win. Or they’ll completely implode because they’re the Jacksonville Jaguars. 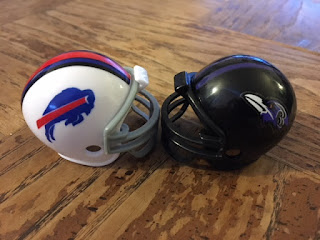 The Bills have named Nathan Peterman their starting quarterback for this game. They have yet to announce who will finish the game. I’m not saying Peterman will definitely get yanked, but based on his previous starts (like the one against the Chargers in which he threw 5 first half interceptions) there’s a strong possibility we’ll see rookie Josh Allen make his debut at some point. The Ravens should get the win here, because they’re the team involved in this game that isn't starting Nathan Peterman. 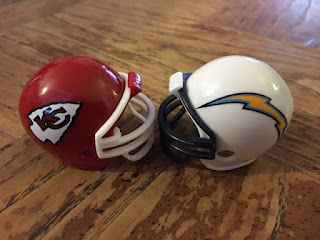 There’s a lot of buzz around these chargers. I think maybe it’s because they’re not plugged in all the way, one second ... Yep that was it, the buzz is gone. The LA Chargers have a fair bit of buzz around them too. Hey where are you going? What do you mean? That wasn’t that bad. Definitely not my worst. Look, if that was too much for you maybe we should just part ways now. Ok fine, see ya later. Alright, where were we? Or “where was I” I should say, ha. Because it’s just me now, I’m all alone here. So why am I still writing? If no one is here to read this do I still exist? Hello?!? HELLO?!!!!!!? I’m trapped in a purgatory of my own creation! AAAAAHHHHHHHHHHHHH!!!!!! 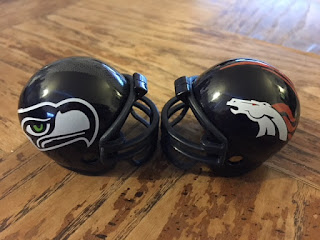 Moving on ... It hasn’t even been five years since these teams met in Super Bowl XLVIII, and yet only 8 players that were active for that game will play this Sunday. That number would have been much higher had the Seahawks not gone through a roster overhaul this offseason. Trades, cuts, and career-ending injuries have made the Seattle defense almost unrecognizable. It’s as if they’re collectively wearing a giant pair of Groucho glasses. In what amounted to a removal of the mustache, Earl Thomas returned to the squad this week after a contract standoff. While some would argue that his frustration will be a detriment to the team, I would contend that this actually makes them unbeatable. Yahoo! 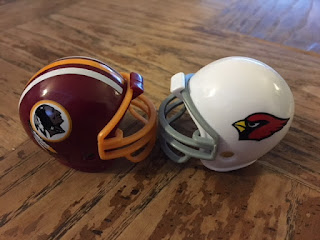 The main question surrounding Washington after the Alex Smith trade has to be, who will they draft next year to eventually replace him? Smith is a decent enough quarterback, and can occasionally be very good, but it always seems like he’s just there until his team can find the guy they really want to be their franchise QB. In short, he’s the offended girlfriend in that wandering eye boyfriend meme. In my season preview I, perhaps facetiously, suggested that the Cardinals will go 0-16 this year, but this has to be their best chance to win a game considering it’s the only time that their roster will be remotely healthy. The Arizona brass looked at their injury-prone squad in the offseason and decided to add Sam Bradford as the new starting quarterback. I mean, it’s on brand, but yikes. If Bradford is still on the field in Week 8 I’m guessing it will be because he’s been laying there in a heap for a month and they haven’t been able to drag him off yet. Don’t worry though, they’ll put up some cones and caution tape so that no one steps on him. 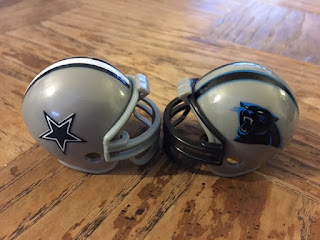 The Panthers are coming off an 11 win playoff season which means they’re doomed in 2018. Why? Consider their records under Ron Rivera:

Based on what I see hear a losing season is inevitable. Every time they post double-digit wins they immediately fall back to earth. Ron Rivera must learn from history or else he’s doomed to repeat it ... again. After some quick research, it turns out that Rivera is a major Civil War buff. In other words he’s demonstrated that he can learn from history. Carolina is gonna be fine! 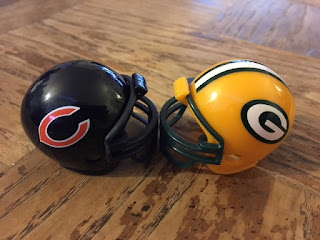 It's the first Sunday Night Football game of the season, so you know what that means, it's time to hear from the man who will be in the booth to call it; ol' CriColl himself, Cris Collinsworth:

You're untouchable as far as I'm concerned CC. 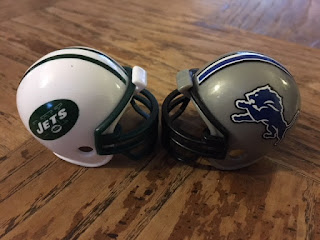 It’s the first Monday night game of the season and we’re kicking it off with ... Jets versus Lions. Huh? What happened, did Titans/Dolphins turn it down? I suppose Sam Darnold’s debut will lend some cachet to this contest, but that doesn’t mean I’m giving them my cash, eh. I wouldn’t have to regardless, because this game is being televised on ESPN, not pay-per-view, but you get what I’m saying, right? You get that I thought, “Cachet kind of sounds like a Canadian taking about money. Welp, too good not to use it.” 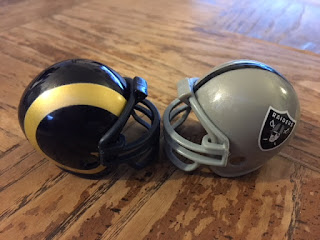 Jon Gruden hasn’t even coached a game (again) yet for the Raiders, but he’s already making waves. Actually, maybe they’re more like ripples or bubbles, because this is reminiscent of someone farting in a pool. 9 days prior to his team’s opening game of the season, Gruden jettisoned their best player and delivered a rousing message to players and fans alike that this team is not ready to win now. That’s a stark contrast to the attitude in LA, where the Rams have bolstered their already impressive roster by adding multiple pro bowlers. Names like Marcus Peters (previously kicked off his college team and suspended a game by his own team in the NFL), Aqib Talib (previously suspended by the league for snatching a chain), and Ndamukong Suh (previously suspended by the league for stomping on people). There are sure to be no negative repercussions when adding three locker room anti-toxins (the opposite of cancers) such as them. Actually this is a disaster waiting to happen; but the Raiders are a disaster that’s already occurred, so I’ll pick LA.

The Chargers commentary is almost a direct quote from real conversations of ours.