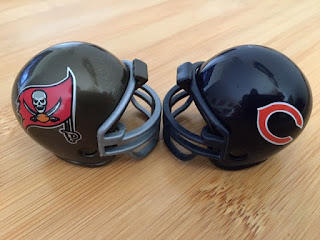 A new era of Bears football began last Sunday. That’s right, it’s Nick Foles to the resc ... ewwww! After Foles lead the offense to a paltry 11 points in his first start last week it now shockingly seems like Mitch Trubisky might not have been the problem for Chicago. And I use “problem” relatively, because they’re still somehow 3-1. But so is their Thursday night opponent, and the Bucs have some extra motivation for this one. Or rather, one of the Bucs does. Tom Brady’s been waiting for this since moment ever since Super Bowl LII. He’s been stewing for almost 3 years now, and it’s showed. You could tell he didn’t even really care when he got back to Super Bowl LIII. That’s why he only managed to score 13 points. He’s still flummoxed by the fact that he was beaten by this guy on the biggest stage of them all. Brady’s career has morphed into a quest to prove to everybody that he’s better than Nick Foles. Once he learned that Foles had been traded to Chicago Brady signed with Tampa, knowing that the teams would meet in Week 5 and that by that point Foles would’ve weaseled his way into the starting job. That’s not me talking, that’s Brady. Vengeful, petty Tom Brady. Meanwhile, Foles is blissfully unaware of this venomous quest to best him. He’s just gonna go out there and do what he does (sometimes) well, sling that football. Unfortunately for him, he’s in a much worse situation now than he was in Super Bowl LII, so Brady probably will have his revenge. But will it finally make you happy Tom? And if not, what will?