Back by popular demand baby!!!!!

The greatest sports movies of all time!

Just when you thought it was gone, like a wicked case of vd, it's back.

And we're back with a doozy... 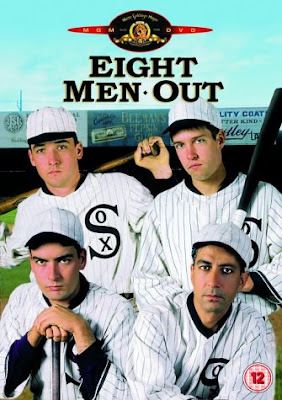 This movie has an allstar cast (Sweeney, Sheen, Cusack, Doc Brown, Straitham, pretty sure John Locke's dad, and... wait for it... Micheal Rooooooker).

Really well done. I thought it really captured the time frame, and just really sucked me in when I was kid.

I felt terrible for Buck and Shoeless Joe. A real impact for a roughly ten year old me.


Anyway, judging by the rest of the votes, it didn't impact others as much as me... but what say you Mustacheers? Anyone else dig this flick?

Anyone else still reading this site?

I just haven't seen this movie recently enough. I'm sure I'd enjoy it more now than I used to. I'm pretty scared of those crazy soul-less eyes of David Strathairn on the poster.

I thought that the "Metro-Goldwyn-Mayer" logo on the cover makes it look like an authentic period piece. I probably never noticed the film itself was contemporary.

I'll check it out. If it sucks I'm going to hunt you down.

Pervitron... you will love this movie. No joke.