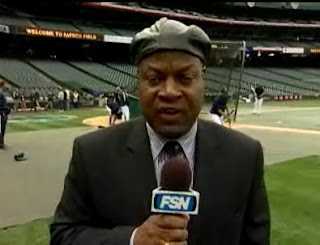 I have managed to put up with this man as much as I can. We all know the end is near for Neihaus but the M's can do better. As much as I enjoy his clever "Case Closed, DA" and "put this one in your sealog mariners", or whatever the hell it is.

I was able to let it slide when I tuned into Sunday Night Football last year and heard him calling the game on Westwood One. I thought maybe he already had that gig. But what I cant forgive is turning on the highly anticipated Florida Tuskers vs Las Vegas Locomotives and hearing Sims on the mike. That's right, you are looking at the play-by-play voice of the UFL. Well UFL, you can have him! They obviously didnt check his wikipedia page before hiring him:

"Listeners often criticize Sims for yelling on mundane plays, as if to generate a false sense of excitement in the listener. An excellent example of this tendency was Sims' radio work on the January 11, 2009 NFC playoff game between the New York Giants and Philadelphia Eagles, during which Sims frequently raised his voice's pitch and volume on incomplete passes during non-crucial phases of the game, plays that few educated football observers would find significant or meaningful."

Lets not confuse this with when Calabro started doing ESPN games. He did that because ESPN wanted someone awesome. Sims sucks. Am I the only one who doesnt want the guy calling my teams games to be doing it because it's "one of his gigs"?
Posted by Fortune at 11:35 AM

Email ThisBlogThis!Share to TwitterShare to FacebookShare to Pinterest
Labels: whores

I dunno... I kind of like him now. The UFL (whatever that is) has no impact for me.