I'm rooting for Milton Bradley. But apparently I'm in the minority... even in his own home town... or Seattle. 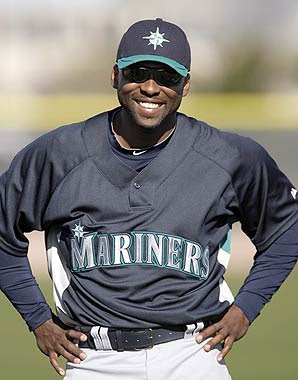 He blew it on a play yesterday... cost the M's a run. Crowd let him hear it. AND THEN... They let him hear it again when he came to the plate next inning.

Would it kill Seattle Fan's to give this guy a break. I get that he's not hitting real well, and he's got a bad rep... but this could be a perfect situation for him and let's just cut him some FRICKING SLACK.

I won't pretend to know all the fancy shmancy new baseball stats (ask Wanamaker... he'll pretend to know about those) but I gotta figure a decent to strong year form Milty would be pretty key to us making the playoffs. (Obviously the offense is AWESOME and who needs him... but he could be the extra boost).

And if that's not enough... Milton Bradley is a bad ass. Reminds me a lot of myself at a younger age. When was the last time we had a bad ass on our team? Buhner? Arthur Lee? There were a few here and there... but not much.

C'mon... that was pretty good!

he labeled him self the kayne west of baseball. i think its great. when was the last time we had a true pyscohpath playing for a seattle team? lets name some of our favorites

I'm kind of stumped though...

i think bosworth would qualify. because we are a pretty squeaky clean city, we might need to include overall train wrecks as well.

Finn,
What are your thoughts on his base running skills?

I vote for the entire Seattle Storm team...they're nice most of the time, but it seems like for a week or so every month they turn into the biggest a-holes...weird

Peter, Peter, Peter... If your approval of a baseball player hinges on them making mistakes... Well I'm afraid you're just not gonna be a fan of too many ballplayers. Even the greatest players ever failed over 50% of the time.

At the plate maybe, but they can still do the other stuff right.

I incorporated that into the 50% otherwise I coudl have gone even higher.

Not Bonds, he had an On Base Percentage well over 50% for a lot of years.

i think bosworth would qualify. because we are a pretty squeaky clean city, we might need to include overall train wrecks as well.