Most of you heard that Rory McIlroy choked on Sunday, shot 80, and blew his chance at getting to wear a green jacket. I remember how pissed I was the last time I shot 80, and I wasnt even playing in the Masters.  But big frickin deal, like me, he probably wont shoot 80 again and he will get to wear a green jacket someday The most interesting thing to come out of Augusta passed on to us by loyal mustacheer Polson: 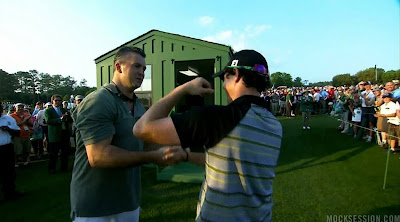 Who is that giving Rory a two handed hand-shake?  Sure as hell looks like WWE Superstar Shane McMahon to me.  There are two possible things going on in this picture.

1.  If you look at Shane's right bicep you will notice it is huge.  He is obviously flexing trying to crush Rory's hand and any future shot at being a champion.  He's telling him "I retired the undefeated European Champ and I expect to die that way!"

2. Most people dont know this but Holywood, Northern Ireland is widely known as the Greenwich, Connecticut of Northern Ireland.  What wrestler would be your idol if you were a ten year old growing up in Holywood, Northern Ireland.  Maybe the European Champ who grew up in your sister city and had the baddest group of buddies ever.  I think Rory was walking away after blowing the most prestigious golf tournament and was blinded by the setting sun reflecting off that right bicep.  He looked over and saw that is was Shane McMahon, his boyhood idol.  He ran over and told him that he always dreamed about being the 5th member of the Mean Street Posse.  Shane, feeling so sorry for this guy, called Pete Gas, who called Rodney, who called Joey Abs.  Luckily for Rory they were just outside the gates of the Augusta, GA golf course since Shane wouldnt buy them tickets.  And then Shane McMahon made Rory McIlroy the happiest depressed little Irishman on Earth: 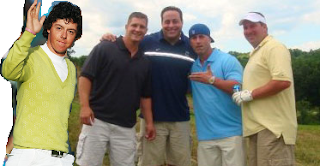 Amazing stuff. It's a shame Test wasn't still alive to deliver a big boot to Rory after he signed his scorecard.

Who are the other two clowns in that second picture? And where's Joey AAaahaabs

Joey Abs was out fishing, hes done with those fools. He realized he didnt have much in common with them after the glory faded away

Who are the other two clowns in that second picture? And where's Joey AAaahaabs