A quarter of the way through the NFL season and Andy Dalton is looking like the Andy Dalton of old. Of course, when I say the "Andy Dalton of old" I'm referring to his days at TCU, because we've never seen him look this good in the pros. To beat Dalton and the undefeated Bengals at home it may take a superheroic effort. Luckily for the Seahawks they not only have the Dark Knight: 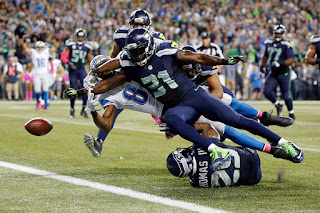 They have bat-man too: 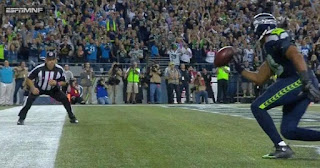 Both teams come into this game at 1-3, but oh how different a 1-3 they are. The Chiefs' losses have all come against undefeated teams, including one that they absolutely blew against the Broncos. Meanwhile, the Bears have looked, and quite frankly, smelled like hot, steamy garbage for most of this young season. The forecast for Kansas City on Sunday calls for 82 degrees, which means that garbage is only going to get hotter and smellier.

Devonta Freeman has scored 7 touchdowns in his last three games. It's an impressive stat if you like touchdowns. Personally I don't. It's an easy way out if you ask me. Real men win by kicking field goals and playing tough defense. Touchdowns? They're for showboats. Get some class Devonta Freeman. Of course, he'll probably score two touchdowns this Sunday regardless of what I say because he clearly has no reverence for the game.

This season the NFL is celebrating the Super Bowl's 50th anniversary by highlighting past Super Bowl match-ups whenever they occur during the regular season. That's all fine and (foppish) dandy, but I'd rather take a look at the Super Bowl pairings that never were. Technically every game this week would fit that criteria, but I'm specifically referring to match-ups between teams that both lost in their respective conference championship game in the same year. Here we have one such combo. This was Not Super Bowl XXXIV. On January 23, 2000 the Jaguars lost the AFC title game at home to the Titans 33-14, while the Bucs lost the NFC title game in St. Louis 11-6, in what will forever be remembered as the dumbest score in league history. It's a real shame that the Jags and Bucs didn't square off in the big game. Their losses deprived the nation of the Mark Brunell/Shaun King showdown that we were all clamoring for. Unfortunately, it seems that America will have to keep waiting for its first all-Florida Super Bowl as neither team looks poised to make a championship run any time soon. The good news for these squads though is that someone has to get a win this week, barring a tie of course. But that couldn't possibly happen ... could it? Perhaps in an alternate universe, with a different Super Bowl XXXIV.

To say the Eagles have failed to impress so far this season would be an understatement. But at the same time to say their play has resulted in a death toll in the thousands would be an overstatement. So it's somewhere in between there, and when you look at it like that, things really might not be so bad. That being said, I wish I didn't have to pick a winner in this game. Neither team deserves my approval. They're a lot like my children in that respect. Yikes, this one went dark. Let's move on.

The Ravens may have saved their season last Thursday with their overtime win in Pittsburgh. But was it really worth saving? Having a season is a big responsibility, and Baltimore has to think long and hard if it's really ready for this kind of commitment. And that's before you even consider that bringing a season into such a volatile and uncertain socioeconomic climate may not have been a good idea in the first place. Look, I hope things turn out alright for Baltimore and that their season grows into a success; I just want them to take everything into account and make an educated decision before continuing on. That being said, they'll probably win this week because ... The Browns are coming to town!

Last week supreme lame-o Clay Matthews was caught on a microphone telling Colin Kaepernick that he "... ain't Russell Wilson bro." Seemingly everyone has taken these comments as a slight to Kaepernick, but have we considered the alternate possibility that Clay Matthews might just be a huge racist who couldn't initially differentiate between two black quarterbacks? Maybe what we heard on TV was Matthews having an epiphany and just thinking out loud. Or maybe race has nothing to do with it and Matthews is just easily confused in general. We'll know that's the case if we hear him exclaim in bewilderment, "You ain't Sam Bradford bro!" after tackling Nick Foles this Sunday.

Just when you think you can trust Buffalo they go and lay a stinker at home against the Giants. Now to be fair, in most situations at home is the most appropriate place to lay stinkers, but not in the NATIONAL FOOTBALL LEAGUE. Anyway, as I was saying before that stinker sidetrack, Buffalo is a tough team to decipher. In fact, these Bills are so hard to figure out they should change their name to the Tips. Yes, this is the second week in a row I've made a football Bills/monetary bills joke. And no, I will not apologize for it. And yes, I'm planning on doing it again on another occasion this season. And yes, I will apologize for it at that point. Let's be real, three is too many.

The Lions are inching ever closer to their first win. Quite literally, as they were within a foot of taking a late lead last week in Seattle. But it's like Vince Lombardi always said, "Football is a game of inches. 3,600 to be exact. I measure before each game to verify that not a single one has been missed. And believe me, I've had to have an embarrassing conversation with groundskeepers on more than one occasion as a result." Wow, such wisdom from that man. You are missed coach.

Coming into the season this looked like it would be a marquee match-up. However, the rash of injuries (and the injuries from rash) to the Cowboys have rendered this game less than. In fact, in a recent recon sweep of all marquees in the US, this game was nowhere to be found. Look for the Patriots to get up early and not look back; because if they did look back they would be faced with a history of sordid secrets and ruined lives they've left in their wake.

Peyton Manning continues to look like a withered specter of his former self. He's an aging veteran that's barely hanging on, and in that way he reminds me of Dennis Quaid's character Cap from Any Given Sunday. Of course, in this scenario that would make Brock Osweiler Willie Beamen. I'm not saying I would pay money to watch Brock Osweiler recreate the "My Name is Willie" music video, but I would support other people paying for it to be created so that I could watch it for free. I'm guessing Denver will sneak away with another win this week.

Well it appears that Cris Collinsworth's Geek Squad appointment didn't turn out quite the way he'd anticipated, so unfortunately we have no choice but to use a picture in lieu of actual video once again. But we won't let any of this stop us from getting you the finest in football analysis. Take it away CriColl:

Michael Vick is back! And he's exactly how we remembered him! It's nice to know that in this unpredictable NFL landscape there are still some things you can count on, like Michael Vick prematurely fleeing the pocket and scrambling out of bounds for anywhere from a two yard gain to a two yard loss. Expect him to do that just enough times to lose the game for the Steelers on Monday.