Before we get to the picks I'd just like to revisit something we discussed back in Week 3, and that's the use of "Sleepless in Seattle," or any derivation thereof, as a headline regarding any Seattle sports team. I vowed that day to shame anyone I saw exploiting this tired trope, and now the time has come. The NFL Network had this on their sidebar Thursday:

Shame on you NFL Network. SHAME!


Another 6:30am PT start in London, and this one is available to us all through the miracle of the worldwide web! This is the first NFL game to be broadcast exclusively on the internet. The league is envisioning this as quite the global event, promoting the game with the hash-tagline #WatchWithTheWorld. I admire their vision, but I feel like it's a bit lofty. If they want to be more realistic might I suggest: #WatchWithThePeopleofBuffaloAHandfulofPeopleinJacksonvilleFantasyOwnersontheEastCoastandRealPiecesofGarbageOutWest.
Admittedly it's not quite as catchy, but certainly more accurate. I picked Jacksonville last week and, in keeping with tradition, they lost convincingly. Well, fear not loyal Jags readers, I'm going with Buffalo this time, and I'm doing it just for you (WINK).


The Buccaneers are coming off a bye week ... I'm pretty sure. Be honest, you wouldn't have noticed if they'd played either. In today's NATIONAL FOOTBALL LEAGUE, I tend to judge teams based solely on what they did last week. Technically Tampa put up zero points, so I can't envision them winning this game. Then again, they didn't give up any points either. Well now, this is a pickle befitting a cartoon stork. It's times like this when I ask myself What Would Jesus Do? He'd probably freak out about the laptop I'm using, but once we got over that, and the language barrier, he'd probably say, "Whoa, their name is the Redskins? Seriously? What year is this?" Good point JC, let's pick the Bucs.


Good match-up here between the Falcons and Oilers. What's that? They moved?!? When? Why didn't anybody tell me? I mean yeah, I kept hearing about the Titans, but I just assumed it was some NFL Europe team or something. What? That whole league folded?!? Even the Titans? Oh right, they were never in NFL Europe. Well I guess the existence of the Texans makes more sense now. I'm still reeling a bit here, so I won't overthink this one. 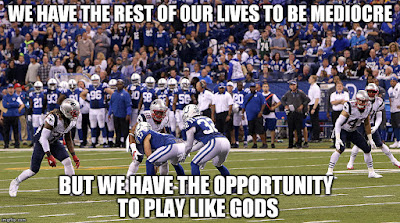 At this point we've all seen the Colts' atrocious fake punt(?) attempt replayed countless times, but I can't help but bring it up, simply for the sheer hilarity of it. I like to think that Anderson and Whalen, the Colts players lining up as a makeshift QB/Center combo on the play, saw the predicament they were in and decided to ignore the wishes of the coaching staff and go for it anyway. They'd either succeed in the face of insurmountable odds or fail magnificently in a blaze of glory. In their eyes they were Butch and Sundance charging towards the Bolivian soldiers. In reality they ended up with the football equivalent of The Shockmaster's debut. I'm guessing they'll stick with standard punt formations this week.


The Lions finally got their first win of the season last week, and it turns out the key all along was getting their best player heavily involved. Huh, go figure. Now that they've unlocked this secret to success they could be extremely dangerous. Although, even with Calvin Johnson's big day they still only managed to claw out a 3 point win in OT. Meanwhile, the Vikings have looked downright solid ever since Week 1. And I get it, whenever I'm somewhere new it takes me at least a week for things to get solid. Even after that there's no guarantee depending on what I ate the night before. Gross. I'll take Minnesota to get their first road win of the season.


The Steelers grabbed a surprise win over the Cardinals last week with the help of 3rd string quarterback Landry Jones. Yes, that Landry Jones! Wait, which Landry Jones were you talking about? Oh God no, that's not who I meant. Your guy sounds like a real creep. Why do you hang out with him? Anyway, while Jones looked good in relief at home last Sunday I'm guessing that he might not fare quite so well in Arrowhead Stadium. Then again, the Chiefs are 0-2 at home this season. So nothing's gotta give you say? Nah man, everything's gotta give!


Due to an existential breakdown in the Thursday Night pick, our analysis of Not Super Bowl XVIII was terminated prematurely, so let's make up for it by taking a closer look at Not Super Bowl XXIV, which wasn't played between these two teams. On January 14, 1990 the Browns lost the AFC Championship Game to the Broncos (again) 37-21, and the Rams fell in San Francisco 30-3. Neither one of those contests were very close, so it might not be worth considering too many of the what-ifs, but can you imagine what it would be like to live in a world in which Bernie Kosar and Jim Everett had squared off in a Super Bowl? It's exciting to think about until you realize that the resulting butterfly effect probably means that this never happens. In the end we're better off with the reality we know. The Browns have shown some serious competency this season, as have the Rams, so this game will probably come down to who, or indeed, whom is the most competent.

Last week I acknowledged the possibility that the Dolphins would pull the classic move of winning their first game after a mid-season coaching change, but still decided to pick against them. Of course, they ended up doing exactly that, making me look like someone who almost knows what he's talking about in the process (which is pretty accurate, if not flattering, really). It also called to mind a classic move in the score-picking game, which is to acknowledge the likelihood that something will happen then pick the opposite to happen. This way, you'll look fine no matter what the result. For instance, the Texans looked strong for the first time all season last week. It certainly wouldn't surprise me if they kept their momentum going with another win this Sunday. That being said, I'm taking Miami. That's how it's done folks!


Would it be in bad taste if they played this game in LA? It's clear that both teams would rather be playing there, unless, of course, they're both just trying to leverage a possible move into getting new stadiums in their current cities. If that's what is happening I don't think I'll ever be able to trust their owners again. Then again, I'm not sure I trusted Raiders owner Mark Davis to begin with. Have you seen this guy? Look at his hair! No seriously, look at it. Just stare at it for a minute and wonder how a grown man can live in these United States of America and walk the streets with that hair cut. Not to mention that he's extremely wealthy and should have access to a private barber and/or stylist. And no Mr. Davis, when I say "private" I don't mean you cutting your own hair in front of your bathroom mirror, which is what seems to be your current method.


Matt Cassel takes over as QB1 for the Cowboys this week, and I can imagine a scenario where this leads to a stunning career renaissance for the journeyman signal-caller. In this hypothetical he does so well that he takes the permanent starting role from Tony Romo, wins a Super Bowl, and eventually his magical story reaches a crescendo when he inevitably guest stars on an episode of Castle. Either that or he flounders for a couple weeks operating an offense he's not overly familiar with and fades back into nothingness. It'll probably be one of those two.


Whoa, insider info from Cris Collinsworth right here on HCM! With that in mind I'll have to take the Panthers as well. I'd also like to thank Mr. Collinsworth for not bringing up the picture we're using for his sound bites anymore. Very professional of you sir. Good thing we've got this bridge, because there's a lot of water under it.

Well Ravens I warned you that last week would be the final time I would give you the benefit of the doubt and you went out and lost again anyway. It's almost as if you guys didn't even read last week's post! Hopefully you're reading this time, because I'm going to provide you with some bulletin board material right now: You guys suck butt. Let that be your motivation.

Need To Boost Your ClickBank Banner Traffic And Commissions?