According to research that I had to triple-check to verify, the Jets have only lost one game so far this season. How have they done it? You're not waiting for me to answer that are you? I was asking you. Look, if you're not interested in this being a reciprocal relationship then maybe we're not here for the same thing.


Michael "Mike" Vick led the Steelers to a stirring comeback victory over the Chargers as time expired on Monday night. And yea though the clock may have run out on that game, it appears to have done quite the opposite on Mr. Vick's career. Ponce De Leon himself would surely turn as green as field-turf, envious as he'd be of Vick's seeming discovery of a youth fountain. Salutations Michael, and glory be to you! That being said, Roethlisberger will return in a couple weeks, sending Vick back to the bench, never to start again. He's really old you guys.


Last Sunday Jamaal Charles blew an ACL in a loss to the Bears. It was the roughest week for chiefs since Chief Henry died on Saved by the Bell. Ya know, the one episode where Zack is a cross-country star. That always felt like a real slap in the face from the writing team over at SBTB. Look guys, we've seen every episode, you've never mentioned Zack participating in cross-country, let alone being the best runner on the squad. Don't treat us like idiots just because we watch your show. Ok, glad I could get that off my chest in this public forum. If anybody knows the person who wrote that episode feel free to send them this link, I'd love to delve into this further, and maybe unpack the ONE EPISODE where Zack is on the basketball team. Anyway, who's in this game? Oh yeah, Vikings and the Charles-less Chiefs.


The Bills' skill players are currently suffering through an injury epidemic. LeSean McCoy, Sammy Watkins, Tyrod Taylor, and Charles Clay are all questionable to doubtful for this Sunday. With so many hurt players we might as well call this team the Medical Bills. I'm sorry. As was foretold, I have made my third Bills/bills joke. And as promised, I am now apologizing. I guarantee I won't revert to this tactic again, no matter how increasingly hilarious it has been.


Through five weeks the Bears are two games better than the Lions. Who would've thunk it? Hopefully no one, because that's not proper English. If you had thunk it then shame on you. Hmm, so I just checked an online dictionary, and it turns out that 'thunk' actually is a word. I never would have thought that. Well, looks like I can't trust dictionaries anymore. This is good though, because it will finally give me a chance to get my dictionary up and running. Most of the definitions are exactly the same except for a few key ones that are VERY different. As for this game, I'm going to guess that the Lions get their first loss of the season. 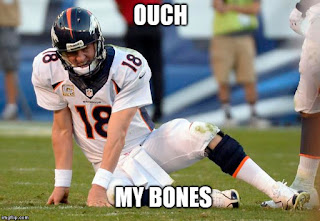 It's been apparent all season that Peyton Manning is no longer the reason the Broncos are winning games. But is he the reason they're losing games? Well no, they haven't lost a game yet, but he's certainly helping keep things close. If nothing else Manning's play through five weeks should have given him plenty of ideas for Halloween costumes: ghost, zombie, or skeleton would all be fitting.


I don't think there's a team that more consistently loses every time I pick them to win than the Jaguars. It's almost as if they're throwing games just to screw with me. While I appreciate the fact that they're reading the picks on a weekly basis, I have to question the lengths that they're willing to go to just to put one over on me. I admit it's a good goof, but it's costing them their season at this point. Let's see how they fair when I pick them to get the W at home against the Texans. A Jacksonville loss this Sunday will provide me all the proof I need.

And so the Dolphins embark on the post-Joe Philbin era. I for one doubt that the players will notice much of a difference on the sidelines this week considering I'm not sure I ever saw Joe Philbin say a word during a game. Fittingly, the Dolphins haven't made much noise this season. There are plenty of examples from the past of teams rising up and getting a win their first time out after a midseason coaching change, but I expect Miami to go quietly in this one.


I caught some highlights from Ron Rivera's and Cam Newton's press conferences this week, and though the sound was off and I had to read it on closed captioning, I feel relatively comfortable loosely relaying their quotes regarding this Sunday's game against the Seahawks to you now:
"It could be a defining win for us, but at the same time it's not the end of the season if we lose." -Rivera.
"Are they a great team? Yes. But I think we're a good team." -Newton.
So in other words Panthers fans, don't get too excited, because your coach and star player certainly aren't. The Hawks need this win, and it sounds like Carolina is more than content to allow them to take it.


It's time once again to celebrate Super Bowl match-ups that weren't. This was Not Super Bowl XLII. On January 20, 2008 the Chargers lost 21-12 to the undefeated Patriots, while the Packers lost at home in overtime to the eventual champion Giants. The former game is largely forgettable aside from the fact that Philip Rivers was attempting to play on one knee. The latter, however, will forever be remembered for a classic Brett Favre blunder late in the game, and Tom Coughlin's face turning a color normally reserved for taste-testers at the Wonka factory. In the end we were probably better off with the Super Bowl we got, considering it resulted in a monumental upset and perhaps the greatest play in the history of the title game. Still, one can't help but wonder just how badly Brett Favre would have screwed up if he'd been given one last chance to do it on the biggest stage of them all. As for this game, I'd say that if the Chargers couldn't get a home win over Michael Vick, they probably won't triumph over Aaron Rodgers on the road.


Last Sunday the Ravens' defense was shredded by Josh McCown, making them the only thing in the last 10 years that McCown has shredded outside of mozzarella cheese for his weekly pizza night. The fact that the man makes a fantastic pepperoni pie only illustrates Baltimore's woeful performance. How does it illustrate that? Not sure. Look, the point is that the Ravens have been real lousy on D. Despite their struggles each of their four losses has been by 6 points or less, so I'm tempted to give them the benefit of the doubt in this game. But be warned Ravens, this is your last chance with me. Jags players, could you please relay that message to them?

And now your favorite minute (or so) of the week and mine, ladies and gentleman, CriColl himself, Cris Collinsworth:

Sorry Cris, we know you're a busy man and we wouldn't dare keep you any longer. We'll just have to go with what we got. In other Collinsworth news, it's been brought to my attention that the nickname CrisCo would roll off the tongue much better than CriColl. While I can't help but agree, I'm kind of entrenched with CriColl at this point, and a change in direction would most likely be too jarring for the general public.


I understand that the NFC East is home to some of the biggest markets in the country, and that the teams within the division have many a supporter throughout the country, but the amount that this group has been featured on prime time so far this season is ridiculous. Do you realize that we've only gone one week (Week 2) out of the first six without at least one NFC East team playing in a night game? The Giants are the most ubiquitous of the bunch, with this matchup being their fourth prime time game of the young season. This would be overkill regardless of the teams' records; but it's downright laughable when you consider that they're all mediocre! Of course, the main motivating factors for the networks are ratings and $$$ (that's money, for all the foreigners), so we should expect to see more of the same for the foreseeable future. It's unfortunate because the nation deserves to get to know some of the league's less publicized teams, like the gritty group of unsung heroes that comprise the 2015 Jacksonville Jaguars. Again Jags, thanks for reading.

eToro is the ultimate forex trading platform for beginner and established traders.