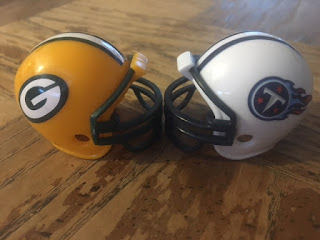 Before we get all up in arms about the Packers' 4-4 start and wonder whether or not they're good, shouldn't we first ask ourselves, "What are we doing with our lives?" If you honestly think that you're doing better than 4-4 then feel free to rip Green Bay all you want. But if you yourself are at .500 or below get your shit straight first and then we can all start making fun of Aaron Rodgers and co. for losing at home to the Colts. Personally since I'm like a 6-2, 7-1 type of guy I can basically say whatever I want. And here it goes: I think the Packers are pretty mediocre, but the Titans are just a notch below that, they're mediocrer .. er. Packers 27-20
Minnesota @ Washington 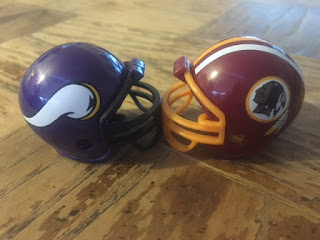 The Vikings started out 5-0 and were the darlings of the NFL. We all wanted to pinch their rosy little Minnesotan cheeks. They've since lost three in a row, including a heart breaker last week against Detroit that has left them with a tenuous hold upon first place in the NFC North. They've grown from darling into an awkward teen whose cheeks we're tentative to touch at all for fear that our hands will be slathered in acne grease. Bradford and the gang have scored an average of 12 points in their three losses which means changes need to be made on offense, and I say start with the coaching. Fire offensive coordinator Norv Turner! What's that? He already quit last week? Oh, well that's not a good sign. Maybe that was the equivalent of Norv saying "It's not you, it's me," even when he knows it's the other way around just so he could get the hell out of there and never have to deal with Sam Bradford again. Sure he'll check the standings every once in a while just as one would an ex's Instagram, but my guess is he won't be too regretful when he does. After the Vikings' last three games I have no choice but to take Washington. You've left me with no choice Minnesota! Now go wash your face.Redskins 20-15
Chicago @ Tampa Bay 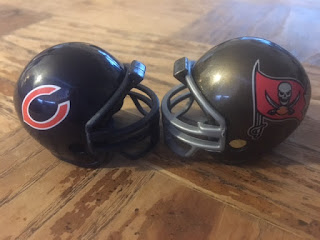 Jay Cutler returned to the Bears' starting unit in their last game and was shockingly decent in a Monday night win over the Vikings. It was confusing at first, but then I realized that this is the perfect situation for Cutler because there's nothing at stake. For years I've been arguing that Jay Cutler hates football, but now I think it's really just that Jay Cutler hates playing in games that matter. The Bears were 1-6 going into that Monday night game and are all but eliminated from playoff contention. There's no pressure on Cutler right now, and that's just the way he likes it. This was the same environment he played in for four years at Vanderbilt. He's back in his comfort zone. Now, if Chicago reels off a couple wins and suddenly finds themselves in contention in the NFC North you better believe that Cutler's performance will take a nosedive. In fact, just to be safe he should probably lose this one and further establish a healthy buffer.Buccaneers 30-27
Kansas City @ Carolina 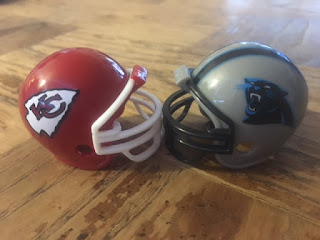 The Chiefs got a win last week while starting backups at quarterback and running back, proving once again that Andy Reid is one of the top coaches in the NFL. Somebody should tell that to his wife. He gets home Sunday night and she's got a list of chores for him to do; honest to goodness, a honey do list for a goddamn NFL head coach the same night that he just led a team with a patchwork offense to a 6-2 record. He's 17-3 in his last 20 games and you want him to clean out the fucking gutters?!? How about this, call up Jim Tomsula or Mike Pettine and tell them to put on some gloves, because they're not coaching an NFL team!!! The Panthers have won two straight but I'll still roll with my boy Andy.Chiefs 23-20
Atlanta @ Philadelphia 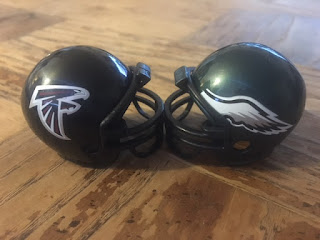 I delved deep into the stats of these teams and found something quite peculiar. The Eagles' offense is averaging 344 yards per game, while their defense is surrendering an average of 344 yards per game. Kind of crazy, right? Well we're not done yet jocko, here's what else: they're passing for an average of 236 while running for 108. And on defense they're giving up an average of 236 passing yards and 108 rushing! They're in complete lock-step. Psychologists say that when a person admires someone they will mirror their mannerisms and behavior. Well it seems pretty clear that the Eagles' defense is hardcore mancrushing on the offense. They always show up at the same hotel as them when they're on the road, they're always watching them from the sideline when they're out on the field. Hell, they even wear the same thing as them every week! You're looking thirsty Eagles D, and a bit creepy. Falcons 31-24
Los Angeles @ New York Jets 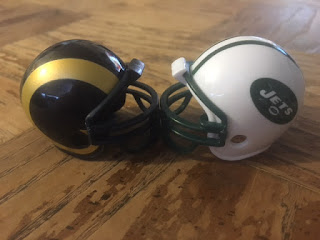 Distraught Rams fans chanted en masse for backup rookie QB Jared Goff while starter Case Keenum struggled during the Rams' Week 9 loss. And I don't blame them. They're fed up and they want change, it doesn't matter how unqualified the replacement would be, or that he sounds like an idiot. The Rams fans, and indeed all of us, deserve that change, even if it means that the alternative is a paranoid, megalomaniacal, sociopathic child. Man I hate Jared Goff.Jets 17-10
Denver @ New Orleans 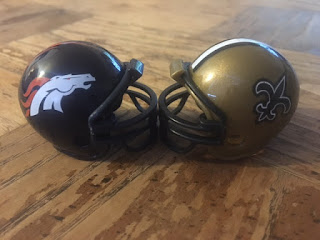 At the start of October I couldn't have imagined picking New Orleans in this game. But in the NFL things can change the blink of an eye, assuming that your blinks last for about a month. However, if you blink like a normal person I guess things in the NFL can change in millions of blinks of an eye. It will be strength vs. strength when the Saints go to the air against Denver's passing D, the Broncos' secondary isn't quite fully staffed though due to injuries so I'll give the home team the edge.Saints 24-22
Houston @ Jacksonville 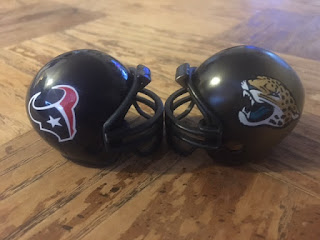 We need something to spice this game up, and I think I may have just what the doctor ordered. If you look at the abbreviations for these teams it's HOU/JAX. You thinking what I'm thinking? Invite Hugh Jackman to this game. What will he do? Let him do whatever he wants. Special guest ref? Sure. All-time QB? Why not?!? There are no rules against it. Ok actually I just thought about it and there are definitely rules against one guy playing for both teams in the same game, let alone an Australian actor who most likely has never played football before. Alright, so maybe just make it "Hugh Jackman Day" and keep a camera constantly trained on his luxury box as he grows increasingly confused about the rules of the game and his presence there. The Texans still have yet to win a game on the road, and if they can't get their first in Jacksonville, they might never get one. 0-8 on the road it is! Whatever the outcome after watching this game Hugh Jackman will be able to tell his Australian relatives that football is NOT very entertaining.Jaguars 22-19
Sunday AfternoonMiami @ San Diego 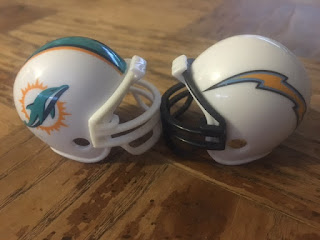 On Tuesday 59% of San Diegans voted to not provide billions of dollars to build a new stadium for the Chargers, which means the team's days in their current hometown may be numbered. But then again all of our days are numbered now. And seeing as how the world will probably end within the next four years there's a decent chance that the good people of San Diego won't have to deal with their team leaving after all. So take solace in that. One thing they should keep an eye on in a couple of seasons though will be the tricky shadows caused by the border wall during afternoon games.Chargers 34-31
Dallas @ Pittsburgh 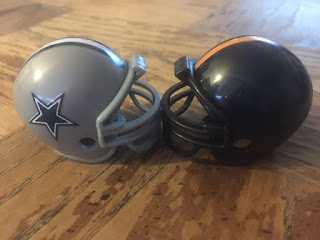 Normally FOX dubs their afternoon games "America's Game of the Week." For this match-up they're switching it to "FOX's Collective 3 Hour Orgasm - 2016." It does NOT have a good ring to it, but it does accurately describe the network's enthusiasm for this particular contest. Conventional wisdom tells me that the Steelers will get the win at home. Then again, conventional wisdom doesn't watch much football, and definitely didn't even know what I was talking about when I said I thought the Cowboys' O-line has the capability to dominate any game they play. In other words I'm not trusting conventional wisdom on this one.Cowboys 24-21
San Francisco @ Arizona 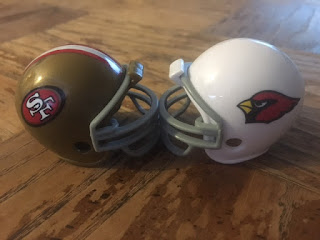 I'm sure it's been said before, but one of the great ironies of the 2016 NFL season is that Colin Kaepernick may never get to kneel within the field of play. San Francisco has lost seven in a row, and there's no end to that streak in sight. So what can Kaepernick do to bring his protest inside the hashmarks? How about taking a shotgun snap, doing a 180 and sprinting into his own end zone to symbolize the wrong direction that our nation is headed. The resulting two points would be a small price to pay to get his point across. And if people don't understand it the first time do it again and again and again until the message is hammered home. Or if he doesn't want to go that far he could just vote.Cardinals 31-10
Sunday NightSeattle @ New England 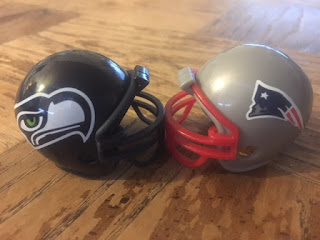 It's a highly anticipated Sunday Night match-up, let's get some insight from the man who will be in the announcer's booth for it, Cris Collinsworth:
Sometimes I don't know whether to love you or hate you CriColl. In other news Bill Belichick legitimately may be Rain Man. Listen to his response to questions at a press conference this Wednesday about his connection to Trump.
He can't even muster "We're on to ..." anymore, he's cut it down to just repeating the opposing city's name. Well guess who I'm picking in this one Bill? Seattle, Seattle, yeah definitely definitely Seattle.
Seahawks 31-28
Monday NightCincinnati @ New York Giants 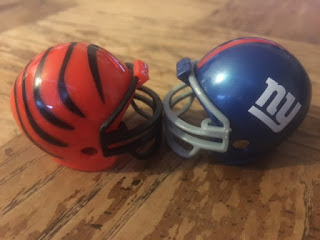 The Bengals are coming off a bye week after playing Washington to a tie in London. Finally a result the English fans could understand! I have no doubt that the Brits were more excited by that finish than any abroad NFL game yet. In fact, being the creative lot that they are, the Londoners have already written a soccer style chant to commemorate the match:O the Bengals and Skins have played to a drawPrecisely in accordance with British lawWe watched through the 75th minute and had our fillThe only result more thrilling would've been nil-nilBut now the Bengals are back in the USA where we like our ties windsored, bowed, or Burrelled, but not on our football fields. Unfortunately for Cincinnati they'll probably be begging for a draw after this one is over.Giants 30-23
Posted by Erik at 2:13 AM