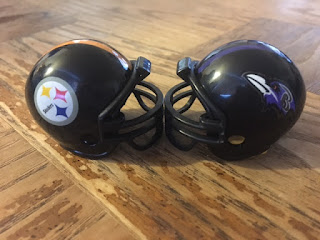 After only two weeks of what was originally expected to be at least a four week absence Ben Roethlisberger is expected to play this Sunday. We've all heard the saying, "You can't keep a good man down." Well apparently that applies to giant pieces of shit too. Shockingly the Ravens have a chance to be in first place with a win even though they've dropped four straight. It's like  stumbling into the bar and still being the most sober guy there. Don't expect them to stay that way for long though, they'll be smashing glasses, throwing up in their mouth, and passing out in their chair before long. Meanwhile the Steelers are slamming waters and shaking it off. They probably still shouldn't drive (especially Roethlisberger) but they'll manage to get to bed without pissing themselves. Jeez, I got in deep on that metaphor.
Steelers 25-17
Jacksonville @ Kansas City 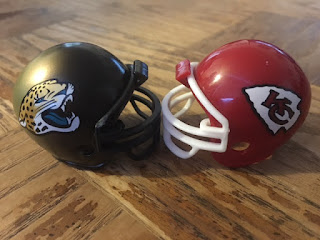 Amidst their (constant) struggles the Jaguars have fired their offensive coordinator and promoted Nathaniel Hackett, a man I can only assume is from the 1700s, to the position. He must have stumbled upon a wormhole in a Philadelphia alleyway and naturally ended up in 2016 Jacksonville, the location that most closely approximates the stench of a Philadelphia alleyway in the 1700s. As we all know smell is the sense most closely related to time travel. So what can we expect from the offensive game plan of a man from 250 years ago? Probably not much early on as Hackett will most likely spend the first quarter screaming about the Jumbotron while attempting to hide under the bench. Once he gets acclimated though expect a lot of runs from the center, because football did not exist in Hackett's time and he won't understand the concept of a snap.
Chiefs 30-20
New York Jets @ Miami 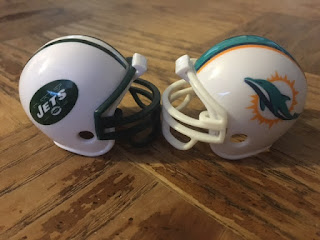 Dolphins running back Jay Ajayi has run for over 200 yards in consecutive games making fans around the league stop and say, "That's a stupid name." And I'm inclined to agree. Why not just go with AJ Ajayi? You know what else is stupid? This is Miami's fourth straight home game. Last week I complained about a similar situation coming up for the Raiders without even realizing that the Dolphins were already in the thick of an interminable homestand. We've established that a computer generates the schedule now, but have we ever stopped to consider whether or not the computer is a fan? What if it's been messing with AFC teams' schedules this whole time to give someone an advantage. That someone obviously being the Patriots, because who else would it be?
Dolphins 31-22
Philadelphia @ New York Giants 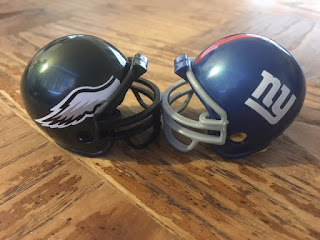 This is a pivotal NFC East match-up and as a result the league has deigned that the field itself will be on a pivot. It'll seem like a cool idea at first, providing fans around the stadium myriad views and giving the game a cool Matrix vibe. That'll be the first play. Before the second play most of the players will be barfing. Then the first pass will be attempted; it will go 10 yards to the left of where it was initially intended due to the rotation of the field. The remainder of the game will basically be hell on earth. Rolled ankles, passed out players, nauseous fans desperately fighting for their lives. Ok so that last part is no different than a regular Eagles/Giants game.
Eagles 20-17
Detroit @ Minnesota 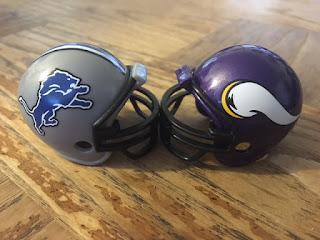 The Vikings started off 5-0 but have since dropped two straight. Has their ship gone astray? Meanwhile the Lions fell back to earth last week in Houston when their 3 game win streak was snapped. Is it possible that their pride has been damaged? (Ha, you've done it again. Brilliant wordplay old boy! No need for actual analysis of the game at this point, just coast on those puns until you're somewhere near a paragraph, slap a one sentence prediction on the end and call it a day. Well look at that, this parenthetical has taken care of the aforementioned paragraph padding. Now for the cherry on top ...) I'll take Minnesota!
Vikings 19-16
Dallas @ Cleveland 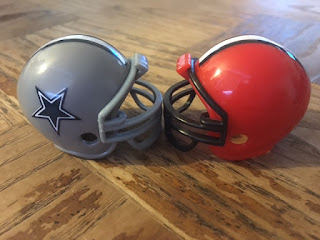 Well the Browns had as good a chance as they will all season to get their first win last week and they didn't come through against the Jets at home. It's like a virgin who goes to a prostitute but just ends up talking; if it didn't happen then who knows if it ever will. Things don't get any easier with the Cowboys coming to town. Now that the World Series has restored Cleveland's sports identity to comfortable misery there's no better time for a pitiful Browns performance that reinforces that and brings Cleveland fans back to a time when the emotional stakes weren't so high.
Cowboys 33-14 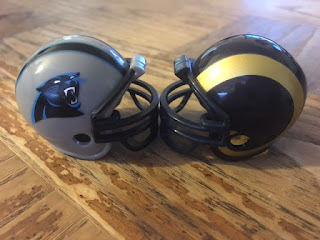 Earlier this week Cam Newton had a chat with Roger Goodell about better protecting him on the field. This is like telling the teacher. Man the Rams are gonna beat him up so bad now! You never tattle. Number one rule of the schoolyard and the NFL. Just ask Aaron Hernandez. Newton couldn't ask for much of a worse matchup if he's concerned about his safety. After all the Rams defensive coordinator oversaw a bounty system in his previous job. Sidenote: If I were Gregg Williams every Halloween I'd go as a different bounty hunter, Boba Fett, Dog, Robert De Niro from Midnight Run. What are the chances that Williams literally attempts to bounty hunt Cam during this game? Like if he gets too close to the sideline Williams tries to taze him. Or he slips Aaron Donald a pair of handcuffs to slap on Newton once he cocks his arm back to throw. It would be a bush league move from Williams, but he's one of the bushiest the NFL has to offer, so don't be surprised if that's exactly what happens.
Panthers 26-16
New Orleans @ San Francisco The 49ers made history this past Wednesday when they became the first team to petition the NFL to have their bye week extended to last the remainder of the season. The league office gave it serious consideration, taking into account the physical and psychological toll the final 9 games will take on San Francisco's players and their families. Ultimately though the NFL decided that allowing the Niners to forfeit their remaining contests would rob opposing teams of the confidence boost they'll surely receive from trouncing San Francisco, and insisted they play out the season. Tough break guys. (They'll probably win now)
Saints 31-24
Tennessee @ San Diego 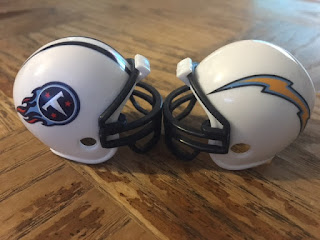 Remember when these two teams met in a playoff game following the '06 season? C'mon, you remember; Vince Young was the Titans' starting QB ... Tennessee jumped out to that 6-0 halftime lead but San Diego eventually came back to get the 17-6 victory ... Or how about how Brandon Manumaleuna had those 2 receptions for 18 yards? ... And remember the game lasted 3 hours and 4 minutes ... And there were 65,640 fans in attendance at Qualcomm Stadium ... And who could forget Ahmard Hall's 2 yard run to end the 1st quarter? Jeez you guys don't remember ANYTHING about that game. You should go educate yourself about it at a reference site for pro football. I hear Pro Football Reference is a good one, but I wouldn't know because I've never had to use it as an aide. That's something hack writers do when they don't got the chops to write original material each and every week.
Chargers 30-28
Indianapolis @ Green Bay 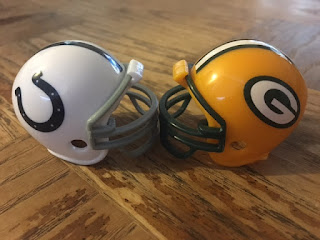 Prior to last season this was the matchup that many picked for Super Bowl 50. Fast forward to midseason 2016 and we're far from this being a potential Super Bowl, except probably to some Rudy-esque turbo on the Colts special teams who plays "every game like it's the Super Bowl." Yeah we get it guy, you put 110% into everything you do and we're all super impressed. Let's take a look at the Indy roster to find the guy most likely to fit this bill. How about Long Snapper Matt Overton

? Yeah look at that guy, he'd probably say something like that. Man this Overton guy really gets under my skin, or at least the prospective Matt Overton that I've now convinced myself is exactly who he is. Because of Overton and how lame he is I have no choice but to pick Green Bay. 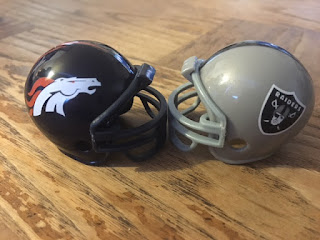 Let's kick it to our man Cris Collinsworth for his two cents on this AFC West battle:

Hmm, that went in an unexpected direction. I'd say I probably have a slight case of Raider fever, but I'm trying to get rid of it. As a result I'm taking the Broncos and some prescription medication. 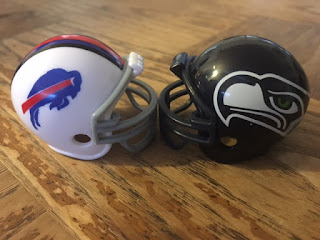 Breaking News: Percy Harvin is coming out of retirement to play for the Bills. We go now to his contract signing ... There's Percy with the the contract in front of him, coach Rex Ryan has just handed him a pen, and here he goes, and uh oh, Harvin's hand seems to be cramping up on him. He's shaking it back and forth pretty violently and oh no he's accidentally slammed it into the table. He appears to be in some serious pain now. He seems to be attempting to push his chair away from the table but it looks to be caught on the rug and oh boy, his chair has tipped backwards sending Mr. Harvin flying off the makeshift stage. Here comes the stretcher folks. They've loaded Harvin up and they're now exiting the room. Well there's a good sign, he's giving us a thumbs up on his way out and oh dear lord his thumb just got snagged on the door handle and bent completely backwards. It appears his comeback has been derailed even before it began due to at least four injuries sustained at this contract signing. Get well soon Percy.