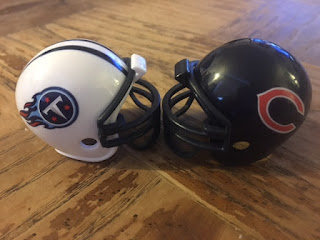 Jay Cutler injured his shoulder in Sunday's loss and may be done for the season. If you ask me he leaves as a tragic hero. When the Bears are choosing the 2nd or 3rd overall pick in the draft Chicago fans will be cavorting while a resolved Cutler watches from the shadows knowing that he was the reason they dance, but also realizing that reminding them of that in this moment would only hamper their exultation. Fear not Bears fans, Cutler will allow you this your day of cheer, but know that one day he will return, and on that day there will be no cheering, in its place will live fear, regret, and unwelcome arousal ... after all it is Jay Cutler. 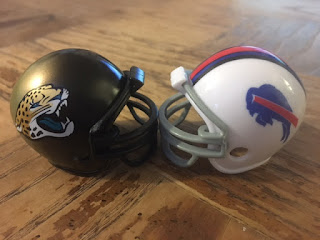 The Bills managed to keep their playoff hopes alive with a win in Cincinnati last Sunday that brought their record to 5-5. Meanwhile the Jaguars managed to keep their playoff hopes alive for 2020. They're all but mathematically eliminated this season, and as long as Blake Bortles' regression continues at the same precipitous rate they don't figure to get to the postseason within the Trump administration. Come to think of it actual jaguars will probably go extinct within the Trump administration, so that should make for a fascinating juxtaposition over the next four years. 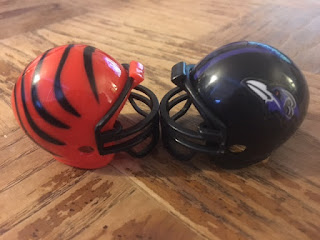 The Bengals have fallen to 3-6-1, and their season is as good as done ... iiiis what I'd be saying if they didn't play in the AFC North, but since they do and the division leader is 5-5 Baltimore, Cincinnati has a chance to put themselves back in the mix with a win. Of course, what we're failing to address is that the Bengals are 3-6-1 for a reason, and that reason is that they suck and think ties are funny. With AJ Green out for possibly the remainder of the season don't expect Cincy to make a run. Well expect them to run more, but not make a run. You get what I'm saying, right? Don't pretend like you don't. Really? Ok, what I'm saying is that because AJ Green is out they're not going to make a run at the division title, but they will be running the ... Are you laughing? You son of a bitch. 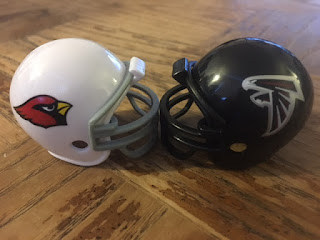 Carson Palmer is struggling right now. He got tangled up in his sheets after a restless sleep and now he can't seem to wrest himself loose. If he struggles any harder he could wind up suffocating. If you're reading this he needs your help. Google Carson Palmer's address and send an ambulance there ASAP. What are you waiting for?!? Unfortunately once he's freed from his sheets Palmer will have to find a way to get past his struggles on the field, and he'll need more than an ambulance to help him there. Well actually I suppose the ambulance could have good hands, so who knows? Even so I'd have to imagine that it wouldn't be an elegant route runner. Inevitably it would plow through DBs and get called for offensive pass interference on a consistent basis. Maybe the ambulance would be more effective as an O-lineman ... Wait what the hell are we talking about?!? Look for the Falcons to get the win at home. 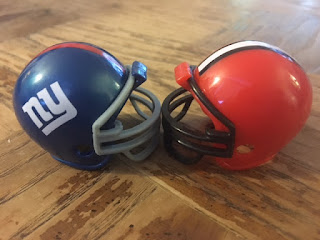 Perhaps the saddest part of the Browns season is that the poor bastards haven't had their bye week yet. At this point all they want, and indeed all America wants for them is a week off. I have to imagine that when the league mapped out the schedule and saw that they needed two teams to have a Week 13 bye they just shrugged and said, "Ok, so Cleveland and who else?" Well ya know what NFL?!? These Browns aren't gonna be your whipping boy for long! They're gonna come up next season ... or maybe 2018 ... ok, 2023 at the latest ... and they're gonna shove it down your throats! 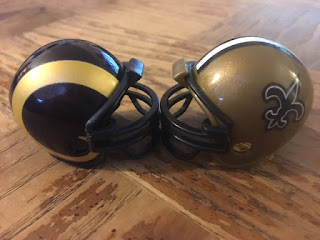 If the Rams games have felt familiar for the last month it's not your imagination, they play the same game EVERY WEEK. Here are their point totals over that four game stretch: 10, 10, 9, 10. And it's not just them, here are their opponents' totals: 17, 13, 6, 14. So not only are they painfully boring, they're dragging their opponents down with them in a cyclone of unwatchability. Normally the Saints are an exciting team, but don't expect their requisite fireworks this week because the Rams extinguish fireworks like a rainy windstorm. While that might sound like something approaching a compliment for LA keep in mind that they don't replace the extinguished fireworks with any of their own, they just kick the unlit, wet cardboard around the cul-de-sac until the crowd slowly dissipates. 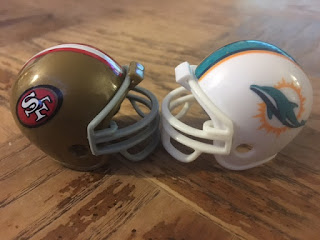 On Thursday I said that the Thanksgiving games would make the Pilgrims proud, but really they would take even greater pride in this game. Not only for Colin Kaepernick's protest of a persecuting nation, but also because the pilgrims respected nothing more than a power running game and that's exactly what we've seen in recent weeks from Jay Ajayi and the Miami Dolphins. You can bet that if the pilgrims were alive today they'd be sporting 'Phins gear. Unfortunately it probably wouldn't look great on them because teal wouldn't go well with their pale complexions; also pretty much nothing would look good on them because they'd be 400 years old and basically walking corpses. 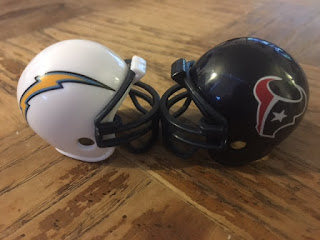 Last week during the Texans' loss to the Raiders in Mexico City Brock Osweiler was repeatedly distracted by a laser pointer being directed at him from the stands. A lot of questions immediately leapt to mind, the most pertinent of which being, "What?" The second most pertinent being, "How?" You're in luck, because I can answer both. These laser pointer hijinx are the result of a 13 year old time traveler from 1998 named Trevor Finch who went to February of 2017 and found out that the Texans had snuck into the playoffs and somehow won the Super Bowl. Thankfully he decided to correct this abomination for the good of the league and came back to Week 11 to make sure that it doesn't happen. Don't be surprised if the laser pointers keep popping up during Texans' games down the stretch because Trevor is not taking any chances. 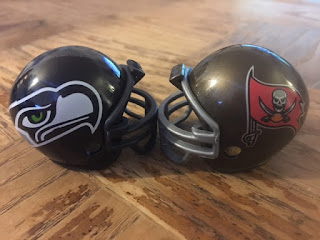 The Buccaneers won last week to bring their record to an even 5-5. The peculiar thing about that mark is that they're 1-4 at home and 4-1 on the road. But really is it any wonder that a team named the "Buccaneers" is better while invading an enemy's territory? Well yes actually, buccaneers of old were much more likely to stick around the Caribbean Sea than venturing elsewhere for their pillaging and plundering purposes. So add another layer of mystery as to why this crew of Bucs has had so much more success away from home. If you'll notice above, this game is being played in Tampa, and it's against the Seahawks, so you can probably guess who I'm taking unless you're a first time reader, in which case where the hell have you been?!? It's Week 12 and I need the readers baby! 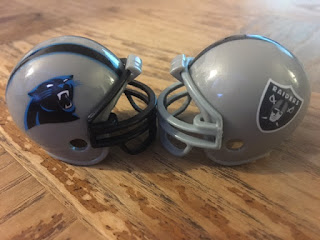 The city of Oakland says they have a stadium agreement in place wth a group attempting to keep the Raiders in town. This sounds great on the surface, but if you look into the actual specifics of it some of the sheen wears off. For instance, it will be yet another multipurpose stadium, but instead of the A's they'll be sharing the field with the city's parks and rec baseball and Pop Warner football leagues. So not only will the baseball diamond still be present but there promises to be orange rinds and candy wrappers strewn about on the field every Sunday. And I wouldn't have it any other way, if the Raiders aren't playing in a shitty stadium they just aren't the Raiders. 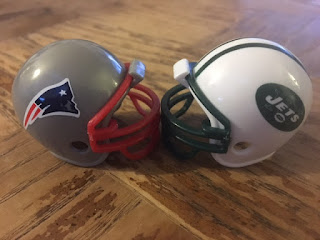 This match-up was originally scheduled to be the Sunday Night game, but was flexed out in favor of a more intriguing pairing. So congratulations Jets, you managed to get the Patriots flexed out of a prime time game. New York has announced that they'll return to Ryan Fitzpatrick at starting quarterback, which I hope was their last ditch effort to get NBC to keep the game. Like they put out the press release and expected the network executives to go scrambling for the phones, "Fitzpatrick is in! Put these fuckers back on prime time!" Unfortunately for the Jets Fitzpatrick's return failed to impress NBC, just as his performance will fail to impress the rest of the nation on Sunday. 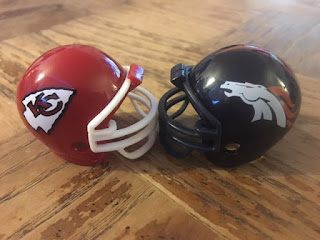 Let's check in with Sunday Night Football analyst Cris Collinsworth to get his insight on this pivotal AFC West matchup:
CriColl, I'm just not sure what the hell is going on with you anymore, and ya know what? I love it! 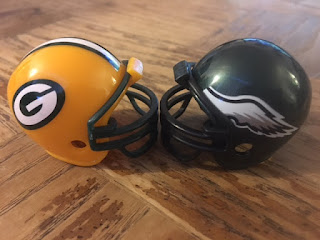 When all is said and done the Eagles may wind up with the toughest schedule in all of football, but ya know what I'll bet Carson Wentz would have it any other way. That's not a typo, I'm guessing that if given the choice Wentz might appreciate some easier matchups. And it's that kind of veteran savvy that makes him seem wise beyond his years. It also makes him seem like a real coward. Again, I'm just putting words in his mouth right now, I have no proof that he feels one way or another, but man, what a spineless jellyfish. Luckily this yellow-bellied rook gets a bit of a break with the struggling Packers coming to town. So there ya go Wentz, you gutless wimp, here's a soft toss right down the middle. One last time I just want to reiterate this is a Bayless, sorry, baseless assumption I'm making about a man I've never met and rarely heard talk.