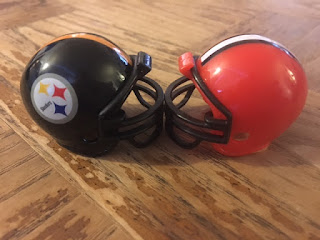 The Steelers have lost four in a row and have to be wondering if their season is slipping away. They're no doubt down in the dumps, staring into the mirror wondering where it all went wrong and how they can get things back on track again. Just then the door swings open, light spills in from outside and a group of shadowy figures emerge, the leader clears his throat "I believe we may be of some assistance." It's the Cleveland Browns! A wry smile forms on the Steelers' faces, "What took ya so long?" they reply. Both teams erupt in laughter as the Steelers think to themselves, 'This season ain't done yet.' 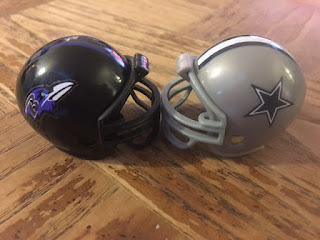 Tony Romo made his first pass of the 2016 season on Tuesday at his press conference when he formally passed the torch to Dak Prescott as Dallas Cowboys starting quarterback. Poetry! It was the grandest public torch passing since WrestleMania VI. But did we learn from Hogan and Warrior? Even though a torch can be passed, it can just as easily be fumbled and picked back up by the original bearer. Will Prescott go down the same dangerous path as the Ultimate Warrior? We'll know if he starts no selling on sacks and demanding money from Jerry Jones on game days. Most people assume it's a good thing that the pressure is now off Prescott, but what if that's what he was thriving on? What if this new situation makes him too comfortable? I think that just may be the case, and because there's little to no home field advantage in Dallas, I'm picking the upset 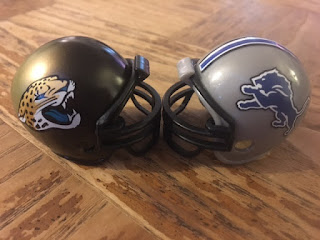 Did you see Blake Bortles' blooper interception last week? It was such an unlikely play, yet because it was the Jaguars it made so much sense. All they want to do is throw the ball into the ground and move on with their day without bothering anybody. But no, the ball somehow bounces to the defense and a catastrophe ensues. It was the Jaguars of plays. How does Bortles avoid this in the future? Might I suggest diving to the ground and rifling the ball into the turf from mere inches away to ensure that the D can't touch it. As a side benefit Blake would get to show off that rifle arm by the resulting divot size. He could do a crude hand measurement and show it off to the crowd who would go wild with each new personal best, because they really have nothing else to cheer. Last week the Lions managed to take over first place in the NFC North while doing nothing at all on their bye. Now they get to play the Jaguars in Detroit, so they can probably just do nothing again and extend their division lead. 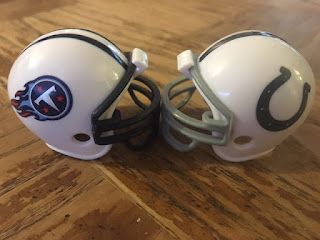 At a glance the Titans may seem like a boring team, but if you look closer you'll see that they've put up an average of 40 points over the last three weeks and have a real shot at making the playoffs after having the worst record in the league last season. And isn't that a lesson that we can apply beyond football as well? Too often we assume we know so much about a person just by looking at them. We must challenge ourselves to break through societal preconceptions before we can truly grow together. For instance, just today I noticed a maniacal, ranting street urchin outside of the grocery store; normally I would scurry off in the opposite direction, but then I thought about the Titans and my perspective shifted. I approached the man and asked him if he'd like a sandwich. He stabbed me. I'm writing this from the hospital. But that doesn't take away from the fact that the Titans are more exciting than you might think. 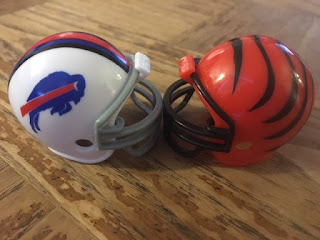 What are we going to see out of this one? Heh, you tell me. No seriously, c'mon, tell me. I'm sick of having to do all the work. It's Week 11 and I've been giving you straight gold for almost three months now, it's about damn time I got something in return! It's starting to dawn on me that I'll have to publish this before you can see it and respond, so I don't know what I'm waiting for. You're probably wondering why I'm even leaving any of this text in the final draft. Well the joke's on you, there's no such thing as a final draft on here! I just spew out the first thoughts that come to mind into Siri and hope she got it down without any typos. This seems like a toss-up, but the Bengals are still pretty solid at home, so let's go with them. Ok Siri, let's Merv on. No not Merv, mauve. No you ducking idiot I'm trying to say move! Holy shot! 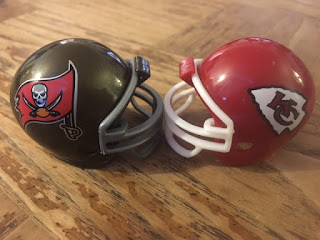 Kansas City is on fire! For those of you reading in the KC area don't panic. If you have relatives who live within driving distance go to them now. First things first though, carefully test out the door knob at your house or apartment. If it's very hot then it may already be too late for you. Your only option is to draw a bath, get in the tub, wait for the flames to entrap you then submerge your head under the water and see how long you can hold your breath. If it's not long enough to wait out the fire, well your prospects were no better beforehand, right? Don't just take it from me though, any survival expert will tell you the same thing folks, I'm not just blowing smoke (WINK). As for the Chiefs, they're also on fire. They've won five in a row and are now in first place in the AFC West. Meanwhile the Buccaneers finally won their first home game of the season and sit at 4-5 in a congested NFC playoff race. In other words, they don't have to start drawing a bath just yet, but with a tough schedule ahead they'll probably be submerged and awaiting the flames when all is said and done. Hmm, this got a bit morbid. 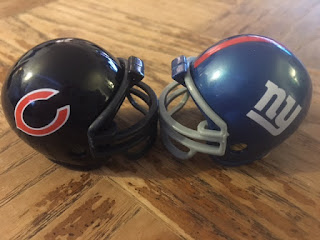 Last week I posited a theory that Jay Cutler played well in his first game back because there was zero pressure on him and that's the way he likes it. But I also suggested that if the rest of the teams in the NFC North continued to lose Cutler would tank to avoid having to play any meaningful games for the rest of the season. Well Green Bay and Minnesota both lost last Sunday and something tells me Jay was watching the scoreboard because this happened. Bears fans seem frustrated anew by Cutler but they should be thrilled that he's back. He's the perfectly hateable fall guy that will gladly lose out to ensure that the Bears have a Top 3 draft pick in 2017. He's not the hero they need, nor the one they deserve, because Jay Cutler isn't a hero at all, and that's what makes him the right man for the job. 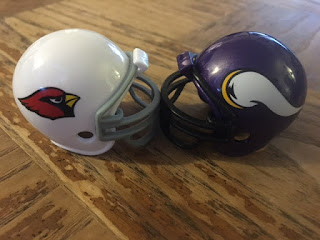 Sam Bradford being lousy is refreshing. We all knew he was just masquerading as a pretty good quarterback for the first five games of the season.. It's like when a mediocre actor gets a role that really suits them and it leads to an Oscar win out of nowhere. Except for in this case Bradford didn't actually win anything, he basically got the equivalent of a Golden Globe nomination ... a Comedy/Musical Golden Globe nomination. So uh yeah, not great. Bradford and the offense have become so stagnant that even a struggling Cardinals squad on the road seems like a better pick at this point. 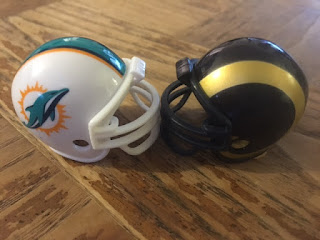 Jared Goff is poised to make his first start of the season this Sunday. One of the most interesting aspects for Goff will be seeing him take a snap from under center for the first time since he was in high school (unverified) because his college team Cal operated solely out of the shotgun. My hunch is that things won't go so smoothly. On the first snap attempt I predict that Goff will stand directly behind center but still in a shotgun stance with his hands in front of his midsection, when the center snaps the ball it will go directly into Goff's testicles triggering a torrent of vomit to spew forth from the rookie's mouth and onto the center's back. Running back Todd Gurley will see this unfold in front of him, locate the barf covered ball on the turf and attempt to pick it up. At this point a dazed Goff will stagger around to see Gurley momentarily grasp the ball, but it will be understandably slippery and it will squirt free from Gurley's hands directly into, you guessed it, Goff's testicles. More vomit. Goff will then pass out due to the pain. Unfortunately his head will land right near the loose ball and a giant pileup will ensue on top of him. So like I said, it could be a rough adjustment for the rookie. 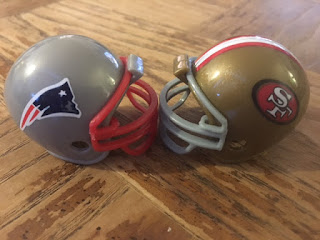 This has the makings of possibly the biggest blowout of the season, and I'm not talking about my dry bar appointment. Am I right ladies? Seriously am I? Did that work? The Patriots are coming off a tough home defeat while the Niners are also coming off a loss (he said for the eighth straight time). The only thing that makes me think this might not be a giant rout is that the Patriots could get up early and coast to a 14 point win. Then again they might still have that Sunday night loss fresh in their minds (I know I do) and just angrily beat the poor Niners mercilessly. 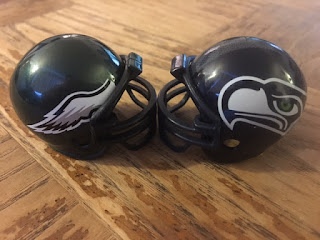 The Eagles have become a pretty predictable team, which makes it all the more confounding that I usually pick their games wrong. If you look at the breakdown of their schedule they're 4-0 at home and 1-4 on the road. They shouldn't be too heavily criticized for that poor road record though, because each of their losses has been within one score against a winning team. Well, this is another road game against a winning team. Like a self-cleaning nose, this one picks itself. 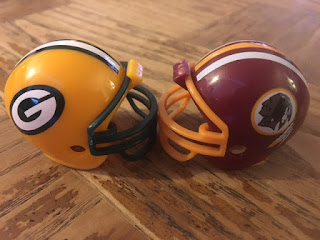 Surprisingly the Packers come into this game with a losing record and, dating back to last season, are 9-12 in their last 21 games. So what's the problem? Let's turn to the top color commentator in the sport in hopes to find the answer:
Gotta say CriColl, that didn't really answer anything. It sounds like you're struggling pal, you need a break. Maybe you could find someone who does a fantastic Cris Collinsworth impression and let him call games for you while you take a breather. Worth considering. 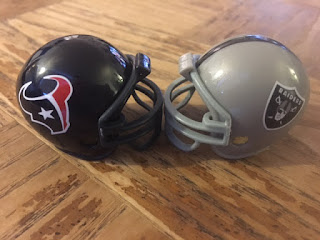 The Texans are 6-3 and I'm so confused. Their quarterback play has been atrocious, they've been out scored by 27 points on the season, and they're currently sitting as the 3rd seed in the AFC. It's like they've pulled off a heist and now they're fleeing to Mexico. Literally, this game will be played in Mexico City. It's a boon for the Raiders because they're 5-0 on the road while Houston is 1-3. Somehow Oakland has found a loophole where they're BOTH road teams. It's what is known as the Mexican Swap. Don't google that to verify, you will NOT be happy with what you find. Well actually maybe you will be, ya sicko.