You Gotta Love These Guys (No Seriously) 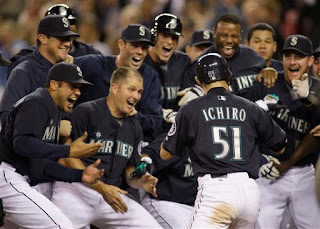 Last night's game against the Yankees featured one of the best endings to an M's game in recent memory and kind of epitomized the season. Good pitching kept them close, they pulled it out in the end with a walk-off, and the whole team participated in a joyous and genuine celebration.

I don't know what my favorite part about the win was. Of course there was Felix pitching a complete game against the best offense in the league, Sweeney extending the game with another clutch hit, and Ichiro's homer. All of that was great, but maybe the best part was Ichiro giving the crotch chop to the rest of the team before he tip-toed home, obviously worried that he was going to get the shit beaten out of him. That never would have happened before, especially last year. Up until the last few months Ichiro always seemed like an asshole, and he still might be, but at least he's acting cool for once, like he's actually part of the team, and not above his lowly (Latin) American teammates. And who do we have to thank for this? The two best teammates in the world Ken Griffey Jr. and Mike Sweeney (No wonder Piazza wanted to play with him so badly). I mean just look at the picture at the top of this post. Sweeney's doing an intense crotch-chop, while Griffey looks happier than I've ever seen a sober person.

Basically, I just wanted to point out that this has been a fun team to root for. And while they won't make the playoffs, they only need to win 5 of their last 14 to be over .500, which is better than most of us thought, regardless of our preseason predictions post. Did I just jinx them into finishing 3-11? Probably, but honestly, who cares, at least it's been fun ... for once.

It just got really dusty in here.

I couldnt have said it better myself. I was at Bert's tavern and you would've thought we had just won the series. People screaming, it was awesome! It definately topped me successfully defending my long drive title at the company golf tournament.

all the way down by bert's tavern and you couldn't come by the rock to say hi? Jerk!