Is this the most hated man in America right now? 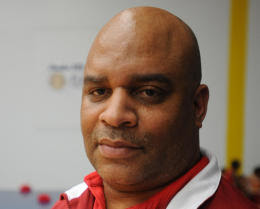 Many of you are probably asking, "Who the hell is that?"


That would be Greg Wise. Head Coach of the Yates High School Boys Basketball team. Tuesday night he couldnt manage to find the brakes and his team set a Texas record for most points in a game, 170. People probably wouldn't have as big of a problem with it if their opponent, Lee High, had scored more than 37. That's right the final score was 170-37. After going into the half with the score 100-12, he felt like his team needed to keep the foot on the gas. Lee's coach felt disrespected after the game, not understanding why you needed to press when they were up by so many points. A fight broke out after an intential foul was called in the 3rd quarter so each team had to finish the game with only 5 players. Wise says he shouldnt have to tell his 3rd line that they cant go out and score.

What do you think Mustacheers, should he have maybe laid off a little bit?