Every year me and my good pal, and your party host Fortune, get together and hype ourselves up about this year's M's season. This year... may be our toughest year ever. Nevertheless... we must live on... we have to survive. Here's how the Mariners can win the World Series:

Mr. F: Hey FORTUNE?!? Long time no speak! It's that time of year. I think the M's can win the World Series and I'm willing to bet that you feel the same! Want to get into this shizz? For starters... actually not starters yet... I mean divisions. Let's forget about the Wild Card. We need to win the West. Agreed?

Fortune: Do I want to get into this shizz, Mr F.? Come on now, does a cow drink milk?!!

Fortune: Of course it does!! I agree we should not discuss the wild card because there is no shot at that with all the teams in the AL that are better than us. Luckily for us, 3 of the ones that aren’t happen to reside in the AL West. 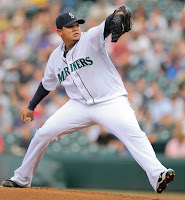 Mr. F: Honestly, they probably ARE better, but it's still the weakest division. No strong rotations (Oakland if it progresses and stays healthy) and only one strong lineup in Texas. But we're not making cases for those collections of dingelberries. We're making a case for the Ms. Let's start with the two givens... Felix and Ichiro must maintain their excellence. Nothing shocking there. I'd also argue that our bullpen with a fresh combo of young hard throwers should be more than adequate. The real issues are in the lineup and starting pitching... but how much does that ever affect the outcome of a ball game? Now, where to first? Starting pitching or our fear inducing line up?

Fortune: I feel like I’m inside Shakers at 2:00am looking at some less than ideal options (or so the feeling has been explained to me). As for pitching, I think the M’s nailed it in their new commercial where Felix dresses up in differently and changes the 1st letter in his name on his jersey 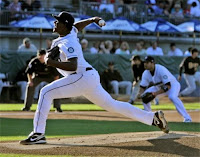 We've covered the excellence that is the King, now there's 4 other spots.... I think 4 and 5 are fine with Fister and Vargas in either order, with a little more consistency. Here's the tough stuff... We need Pineda to make an immediate impact and be a STRONG #3 starter. I think he can easily get there, this year may be tough though. That leaves a big #2 hole... hee hee... and who better to fill that gaping 2 hole than Erik Bedard. Hey, he's been pitchign great this Spring. IF he stays healthy... and IF Pineda contributes right away and IF Vargas and Fister can replicate the high stretches from last year... than that's a pennant winning rotation!

Fortune: I think Fister is probably the best bet to fill up that 2 hole. If he pitches like we think he can, we would certainly make a good number 5 starter. Totally agree with you on the rotation. It’s the bullpen that worries me the most. It looks like we are going to rely on Cortes (has since been sent down) and Leuke who are both gonna be rookies. I heard Ray talking on the radio and it sounded like he still wants to start. That coupled with Ardsma’s hip issue, who knows how hes gonna pitch this year. Oh wait, we are supposed to pump ourselves up…

Mr. F: Yeah, stay the course... the bullpen will be fine. Aardsma sucks anyway. Let League close games. The young guys will shine. If they stay out of prison. It's solid. The lineup? Well... we can fix that too.

Fortune: Let’s go round the horn (backwards) as they say. Ichiro is going to have a season of earthquake proportion. Put Guti down for .280 and 20 HRs. Saunders has a break out year. Jack Wilson plays decent D. Figgins is obviously going to bounce back to the all-star caliber 3B he thought he was coming in to play before Wakamatsu’s failed 2B experiment. Ackley hit like a 500 ft homerun the other day, hes the best hitter in the minors right now, he will start opening day. Smoak will break out as well, probably 40 HRs, 115 RBIs. That just leaves Olivo who can speak Spanish when Felix is on the mound.

Mr. F: Too soon, Fortune... too soon... anyway... I like the way you think as far as the lineup goes, and Olivo and Wilson will be 8 and 9 so no worries if they aren't the dynamos with the stick that the rest of our lineup is. Plus, our rotation will be rock solid so if we need to trade, it'll only be for a SS or Catcher and maybe some bullpen help. Buuuuut you forgot about DH! But no worries, cuz that'll be awesome too!! Either we have a solid year from Jacky Cust, or Milton makes the team and reverts back to that Texas Ranger form that once made some fool trade Andre Ethier and Carloz Gonzalez for him in a fantasy league. I really hope Milton makes the team. At the very least it'll give us a chance to run this again!

Fortune: I should have gone with “unleash a tsunami of singles”. Did you hear one hit the Oregon coast last week? I think the thing I am most looking forward to this season is our new manager. Wak was obviously in over his head and I have been getting some pretty good vibes from our new Skip. Plus he has a kick ass mustache! If everything plays out as I would expect it to, put me down for 93 wins which I say wins the west. 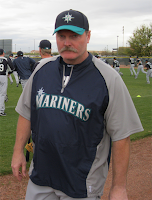 Mr. F: Nice try Fortune, bu I have it equaling 95 wins. Guess I just love the Mariners a little bit more. But I do agree on Wedge's mustache. I've come around on him pretty quickly, and I think most of it has to do with the mustache. Well that was pretty easy actually. Any preference on who play win the first round of the playoffs?

Fortune: The Twins, for obvious reasons

Mr. F: Ha! Yes! Right... but... explain the obvious reasons so the Mustacheers can get in on this.

Fortune: because my brother looks like me. I can try and find a picture. And I would prefer to beat the AL East time in the ALCS

Finn: Of course.
Ok there you have it. M's win the West before decimiating the rest of baseball on route to the 2011 World Series. It's gonna be a magical year! And with that we'll start every season just like the Mariners start every game with two little words: Baseball time!

Fuck the M's - they're hopeless.....jump on the Baltimore bandwagon and ride it all the way to the World Series with me this year - I'm not kidding.....IT'S GONNA HAPPEN!!!!!

It's gonna be rising even more once the season starts and our boys in blue show their stuff (or, lack of stuff I should say)