First start of your career? Good luck Andrew! Well, there it is, the best joke I'll make all season. Just remember when you look back at my body of work over the next 5 months, you were warned. Word out of Chicago is that Jay Cutler has been smiling a lot more leading up to Week 1. That either means that he's lightened up a bit, or he's gone completely the other direction and he's now that scary, crazy type of angry. Either way I think it will make him a more productive quarterback.

Well it's that time of year again where the nation gathers round the hearth to listen to the ol' transistor and wait to hear news of Michael Vick's injury. Some of my fondest memories involve my family recounting all of their favorite Michael Vick injury stories. I think he'll last past Week 1, but after that, all bets are off, and that's a good thing since Nick Foles has a crippling gambling addiction, and the Eagles will need him focused once that Vick injury does occur.

Jake Locker has officially been handed the reins to the Titans offense. Upon hearing that news he threw his hat high into the air. In fact, he threw it so high that it was impossible to catch on the way back down. But hey, Locker don't know no other way. Meanwhile the Patriots appear to be a football team capable of winning football games, and that's a good attribute to have in this league.

An intriguing match-up here. Of course, we've been without football for months so every single match-up could be considered intriguing. I shit my pants at a mascot/pee-wee halftime game last week, that's how pumped I am. Hey guys, remember that last sentence when I mentioned my pants-shitting? You're not gonna tell anybody about that are you? Please? Anyway, I think both of these teams will end up being competitive, which means this game will be competitively intriguing.

Oh boy, this is not intriguing. Jacksonville seems bound for Awfulville (fun trivia fact: Awfulville is the hometown of 6 Cardinals quarterbacks past and present). Meanwhile, the only reason to watch Minnesota other than a possible awesome roof-caving, Adrian Peterson,  may be sitting on the bench for this contest. I know one thing for sure, this game's getting the corner TV at The Shack (which I just decided will be a running gimmick each week this season).

It's the premiere of RG3! Fair warning, if you haven't seen RG1 or RG2 you should probably go back and watch them, otherwise you'll be lost. Speaking of lost, the Saints have no coach and no interim coach, not to mention no incentive to sack the quarterback. I mean, why bother, right? While I don't expect a lot from New Orleans this season I just don't see a rookie quarterback getting a road win in his first game ..... well, not this one anyway.

The Bills opened 2011 with a surprising 41-7 drubbing of the Chiefs in Kansas City. I foresee history repeating itself when Buffalo travels to New York (the city, not the state; if it were just the state the Bills would not have to travel at all to get to New York; check it out, it's a fact). As stated in my critically acclaimed season preview I think the Jets will crash and burn this season (pun absolutely intended). The long, painful trek to sub-mediocrity starts here for Rex and co..

I'm tempted to pick the Rams in a shocking upset here. But the temptation comes from that same twisted part of my brain that causes me to play chicken in my car on the third Friday of every month down at the Point. It's like, sure I win every time, but I always wake up the next morning feeling terrible about my opponent who swerved at the last second and inevitably veered off the cliff. So, it's with a clean conscience that I predict that Detroit will win this game.

Plenty of interesting anecdotes came out of the Dolphins' appearance on Hard Knocks this Summer. While Ryan Tannehill thinking that the Kansas City Chiefs are in the NFC East is fairly hilarious, I think the more outrageous quote was Reggie Bush saying that one of his goals for this season is to get at least 4 yards every time he touched the ball. It's possible that he meant that he wanted to average that per carry, but it's much better for the purposes of this blog to assume that he meant he literally wants to get at least 4 yards on every single touch. My bet? That goal will go unfulfilled starting with his first touch. Prove me wrong Reginald, but be warned, 95% of what I predict comes true.

There are a lot of folks out there who see this match-up as a possible NFC Championship preview. However, most of those aforementioned folks look like this: 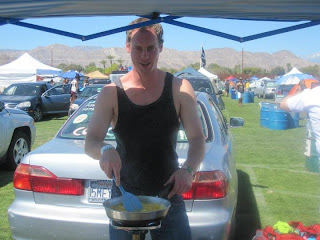 So take that for what it's worth. Of course, the 49ers made huge strides last season under first year coach Jaw Sweatshirt, but it's most likely time for them to fall back to earth. And who lives on earth? Aaron Rodgers.

Welcome everyone to RussellMania! As if we all weren't excited enough for this Hawks season Pete Carroll has decided to start the most dynamic quarterback that has ever played football at NC State and Wisconsin (a claim that I will take to the grave with me!). How could anyone not be excited? For both of these teams the 2012 season begins in the same place that the 2011 season ended. In that contest the Cards won in OT in what can only be explained as a long con by the Hawks. That clever rope-a-dope has undoubtedly lured Arizona into a false sense of security that will be torn asunder within minutes of the opening kick-off. In the words of PC, I'm so friggin jacked up right now!

The big question on every Panthers fan's mind is can Cam Newton recreate his 2011 performance in his 2nd year as a pro. I tend to think not. Fact: no player in the history of the NFL has had those exact stats in any season before, so why should we expect Newton to duplicate them? He should still be an exciting player though. The Bucs are currently on a 10 game losing streak, and what better time to break it than in front of a sold o ...What's that? The Tampa fans didn't sell this game out? Ya know what, maybe this is a sign to the Tampa players that they need to start performing better; it could also be a sign that the Tampa fans suck. Either way I think the Bucs step up and get the win in their opener.

It's a playoff rematch, this time without Tebow. This is just like Teen Wolf Too. I mean sure Jason Bateman (Manning) is a good guy, but he doesn't have the charm and the magic of Michael J. Fox (Tebow). Be that as it may, Bateman did have better form in his athletic scenes so I can see why the move was made. The loss of Hines Ward will really be a hindrance for the Steelers who will be sorely lacking in the cheap plays and holding departments without him, which could ultimately cost them this game.

Is the Ravens defense finally too old to compete? I have an inside source with knowledge of the situation who says no. Apparently the music has been turned way up in the Baltimore locker room this preseason, and as we all know if it's too loud, you're too old. Clearly it's not loud enough for these Ravens, which means they still have some years left.

It's the perfect storm. ESPN's annual scheduling of a lackluster AFC West match-up to fulfill their opening week Monday night closer has combined with a shortage of football play-by-play announcers to result in Chris Berman spending three and half hours doing this. May God have mercy on our souls.