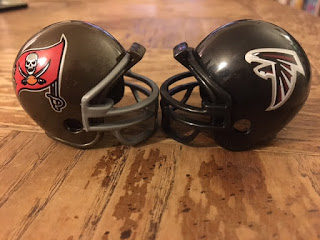 Years from now you'll be able to recall exactly where you were when you watched this game. You'll regale fellow party goers with your recounting of the big plays, what you were wearing, your snack of choice during the game, no detail will be omitted. Of course, I'm operating under the assumption that not only will you watch this game, but also that you have that Marilu Henner brain abnormality in which you remember every day of your life. If that's not the case then this will be a mostly forgettable contest. I expect both of these teams to hover around mediocrity, so it's fitting that they kickoff the year against each other, and that most of us don't have to pay any attention to it.
Falcons 27-23 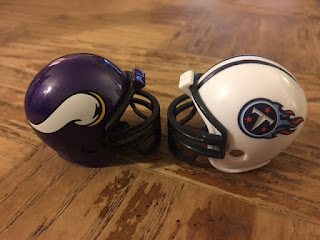 If he had reentered the draft this past Spring would Sam Bradford have been selected in the 1st round? Would he even have been selected in the 4th round? So why did Minnesota decide that he was worth both picks?!? Some have made the argument that the Vikings are pushing all of their chips in, making a win now move. Then why trade for a guy that's never won? I think they'll be punished for their foolishness with a humbling loss in Tennessee.
Titans 20-17 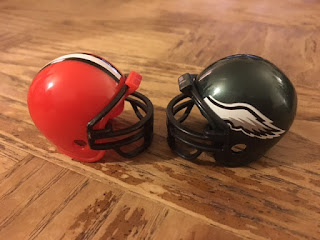 All indications were that the Eagles were going to bring quarterback Carson Wentz along slowly, possibly even sitting him for his entire rookie season. Well apparently they saw enough out of him in the preseason, when he was injured in his lone appearance, to anoint him as their QB1. At this point I'd pick them to lose handily to just about any team in the league. That being said, they're playing the Browns. Now I don't know what to do. (Covering my eyes as I type ...)
Browns 10-9 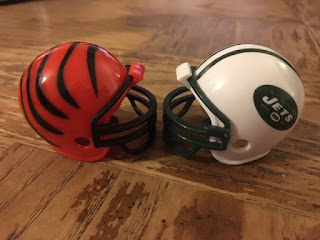 It's a match-up between two playoff contenders. Then again, you could make that statement about any game this weekend and technically be correct. Except for Cleveland/Philly, they've both been mathematically eliminated already. Ryan Fitzpatrick played hardball with the Jets regarding his contract and won because his argument was you can either pay me or let Geno Smith be your starting quarterback. At that point the Jets had no choice but to back up the Brinks truck baby! That's right, they paid him entirely in cash. Sounds cool but it's actually very inconvenient for Ryan and his family. Imagine how stressful it must be to have that much cash sitting in your house at all hours. To make matters worse the Jets made a big show of the delivery, commissioning a parade to lead the armored car through the neighborhood so that everyone would be aware of the piles and piles of loose money that are now stashed within that house. The Fitzpatricks are living a waking nightmare. Due to all the stress I expect Fitz and the Jets to be sluggish in their first outing.
Bengals 23-16 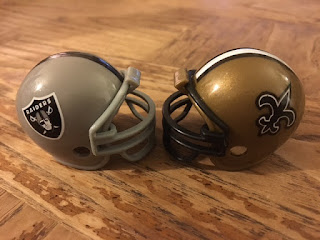 There's a whole lotta buzz surrounding the Raiders coming into this season, but a lengthy road trip and a 10am kickoff to start the schedule could be a little tough to handle. I think they may struggle as a result. Then again, I could see them easily handling a Saints team that I don't expect to be very good. So basically I think Oakland will either win or lose.
Saints 30-28 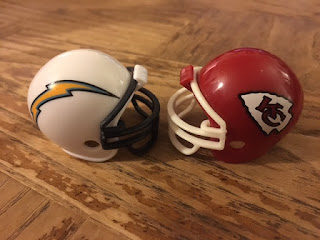 To help improve his clock management skills after his deficiencies reached critical mass in a disastrous end to the Chiefs' playoff loss Andy Reid's wife put him in charge of managing all the clocks in their house. Sources tell me that it did not go well. He forgot about daylight savings time and as a result all of his clocks are still an hour behind. Don't be surprised when Reid doesn't show up until the 2nd quarter on Sunday. KC should still be able to rally from the resulting slow start.
Chiefs 27-17 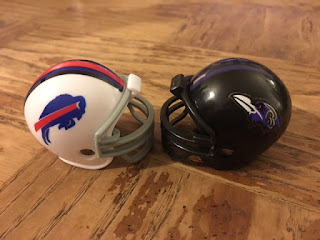 Tyrod Taylor will return to Baltimore, where he toiled on the bench for four seasons, and triumphantly shout, "Remember me?!?" To which the Ravens fans will respond, "Oh yeah. Hey what's up?" It won't be the frightened, trembling reaction he was hoping for and it will throw him off his game for much of the day. In this toss-up that will be too big of a hole for the Bills to dig themselves out of.
Ravens 20-17 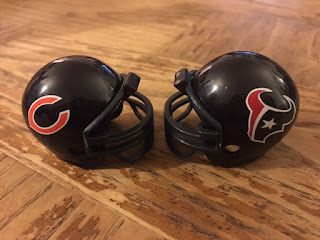 At this point JaDeveon Clowney's injury saga seems like a neverending story. I say that not only because maladies nag him on an annual basis, but also because he looks like Falcor. 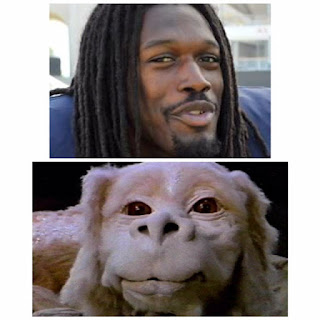 This man's luck is draggin'. I assume he's relatively healthy for Week 1 (I haven't actually verified that), and even if he weren't I'd still go with the Texans in this one. 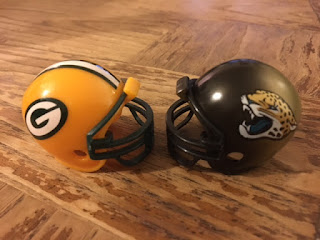 The Jags should sign Jordan Rodgers, make him a captain, and send him out for the opening coin toss. He'll stare deep into Aaron's soul, rose in hand, their lips beginning to tremble. Together they'll break down in tears and hug, walking off the field arm in arm. And who was the ref? That's right, Chris Harrison. Why? Don't overthink it. I'm expecting a lot (probably too much) from Jacksonville this season and I think it starts with them giving Green Bay all they can handle in the opener.
Packers 35-31 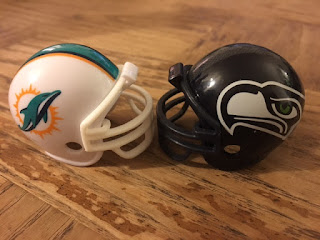 The Dolphins open up their season with the longest road trip possible in the NFL. And I do mean road trip. I have it on good authority that the whole team piled onto a bus and left for Seattle last week. They've been leisurely weaving their way across the country stopping at many a roadside attraction. As fun as it sounds it was really a foolish endeavor, the team has missed a lot of valuable practice time. Then again, they did get to see the second largest ball of twine on the face of the earth along the way, so there were pros and cons (Side note: Pros and Cons would be a great title for a book about an NFL team that had a lot of off the field trouble with the law; unless it's already been used. If not I'm calling dibs). Make no mistake though, they'll be pooped by the time they get off the bus, which won't bode well for their chances.
Seahawks 27-10 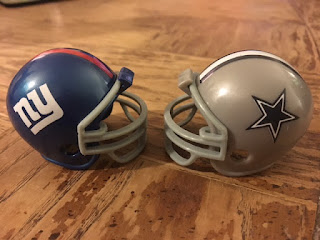 Ben McAdoo does not look like an NFL coach. He looks like an opposing youth soccer coach from 1994. Like the team is from the next town over, and they're probably no different than you and the kids from your neighborhood that you play with but something just seems off, and he's the embodiment of it. Needless to say I don't have much confidence in him. But I think his squad will get by an already banged up/suspended Cowboy team.
Giants 30-22 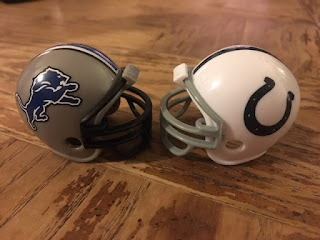 Do you like points? Good, because this game will have them in ... Wait did you say no? You don't like points? What's your deal man? This is so typical, I have some awesome, hyped up blurb about this game and all the sick, scoreboard bustin' action we're going to see in it and then you take a fat dump on the whole thing by saying "Nah, don't like points." And I can tell you're doing it just to be a contrarian too, that's what make me so furious! Ya know what, fine, just don't watch this game then, no skin off my knee. Or whatever, watch it. But if I even see you so much as crack a smile or pump your fist after a touchdown I'm gonna tear you a new one pal. I'll put you on blast on alllll the social medias, I'll sign up for the ones I don't have just to drag you through the mud. I can't wait, oh I can't wait to throw this back in your face.
Colts 34-31 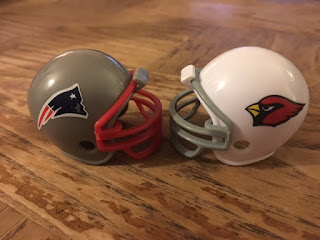 It's the moment I think we've all been waiting for. No, not this game, the analysis from my favorite and yours, CriColl himself, Cris Collinsworth! Obviously we haven't heard anything from him over the Summer so it should be interesting to hear what he's been up to and get his insight on this match-up. Take it away CC:

Wow, not what I was expecting from such a professional, but hey we all have off months. In fact, Tom Brady is having an off month right now, which makes this an easy pick. Also, please nobody tell Cris about Romo.
Cardinals 24-14 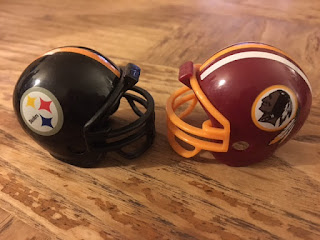 Here's an interconference match up between 2015 playoff teams. Right now you're probably thinking "Oh boy, here's another dimwitted goof from a would be jokesmith." But I'm not kidding, Washington was actually a playoff team! Feel free to double check, I did. The fact that probably half of you had to look it up too should help explain why I'm not expecting very much from this group. Meanwhile, the Steelers have what should be an explosive offense despite the fact that they really like weed. As a result they'll be missing a couple pieces to start the season, but that shouldn't stop them from coming out smoking ... weed. They're just going to keep smoking weed. They'll probably have 3-5 more players suspended throughout the season. Regardless, they should be able to handle this one.
Steelers 30-23 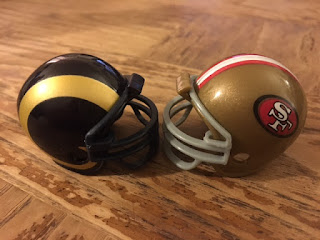 Jeff Fisher's 7-9 rant from Hard Knocks sounded like Todd Parker at the end of Boogie Nights. (Clip is NSFW, unless you work at a totally badass office)

Desperate ravings of a hopeless man who knows he's beat. In other news, this game will be nationally televised and the starting quarterbacks will be Case Keenum and Blaine Gabbert. Umm.
Rams 13-10