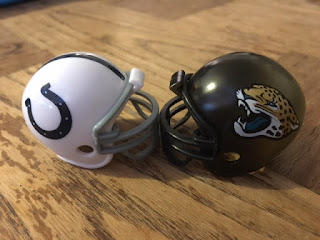 Well Jags, I'd love to say it's been fun, but I can't. In fact, it's been pretty lame. I'm setting a reminder in my calendar for the last week of August 2017 to read: "DON'T PICK JAGS TO MAKE PLAYOFFS" I'm also setting a reminder for a random date that says, "When you meet Roger do not believe his lies." I'm guessing I'll forget that I wrote it and maybe assume it's been sent to me from the future. It should make my next encounter with a Roger VERY interesting. Ya know what, screw it, what could one more week on the Jacksonville bandwagon hurt? Don't answer that. 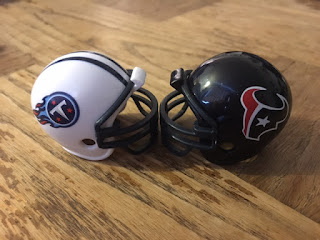 On paper this is an easy one to pick. Problem is I don't make these picks on paper, I'm all cyber baby! Also, it should be clear to you by now that regardless of the format none of these picks are easy to make. It's been pretty ugly so far. Not John Lackey ugly, but almost. I'm just thankful that the bye weeks have finally arrived to give me some sweet relief. Not only do I get to pick fewer games but I can also use the energy that I would've allotted for the 16th game and concentrate double on one match-up. Oh it's not this one. Is that what you thought I meant? God no, not this stinker. In fact, I didn't pay much attention to this game at all. I mostly just attempted to make up punch lines to non-existent jokes. So far all I've got is Osweiler? I hardly knew her. 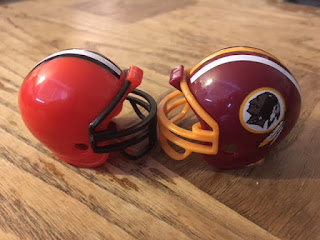 Look I know I give the Browns a hard time, but they've actually had consecutive close losses in which they had legitimate chances to win. So at times I wonder if I'm being to hard on them. Then I remember that their team name is the color of poop and I know I'm doing the right thing. However, for one week they won't have the most ridiculous nickname on the field, so they can hang orange(?) hats on that. Now if their name were the Brownskins, well then ... Ya know what let's forget I even posited that. Too late? Joke's on you, because I happen to have a delete key on this ... Wait where the hell did my delete key go? This isn't good. Hopefully I dorn't have any typos. Shit! 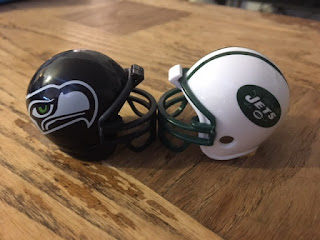 Ryan Fitzpatrick had an abysmal game last Sunday. He threw six picks and the Jets were none the richer ... Yes I did it. And ya know what? I did it years ago when I posted my Week 6 picks for that season. Look, I only get so many chances to make that reference, and I'm sure as hell not going to let one pass me by. This week Fitzy ol' boy goes up against a Seahawks team who, while limiting opposing offenses' point totals, has only generated one turnover this season. Something's gotta give. It's the unstrippable force meeting the removable object. In this cosmic battle I'll go with Fitzpatrick's propensity for propagating opponent possessions as the prevailing presence and in turn take Seattle. 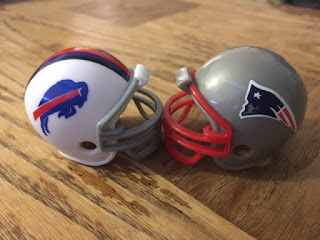 Another week and another impressive win from the Patriots. Though it may have been another costly win, as backup to the backup quarterback Jacoby Brissett was diagnosed with a sprained thumb after the contest. It might be unfair of us to continue to be suspicious of Bill Belichick (just kidding it's definitely warranted) but I'm starting to suspect that he's rooting for, and possibly even causing, these injuries to his quarterbacks. With each victory by yet another new substitute his coaching acumen becomes even more unassailable. We'll know for sure that he's up to something when Brissett doesn't show up on the field this Sunday not because of his thumb but because he's been tied up with sweatshirt drawstrings in the locker room. I don't care who plays QB for them, I'm not picking against New England until I see something on the field that compels me to. 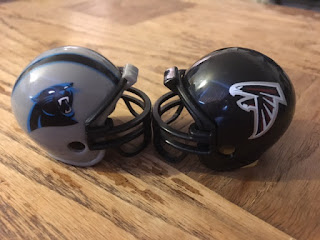 Is it time to start believing in Atlanta? I don't know I mean a whole city that exists under the sea? Sounds like bull shit to me. Hmm, seems I misunderstood the question; strange since I was the one asking it. Anyway, more to the point, should we believe in this Falcons team? They're 2-1 and the offense is humming. Then again, they're giving up about 30 points a game, so it's hard to fully get behind them, unless you're a wide receiver, in which case it's quite easy. They should be up for this game though and I see them edging Carolina in a wild one. 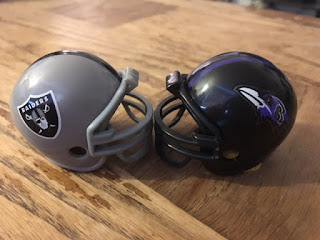 The Ravens have stunned us all by jumping out to a 3-0 record. Many aren't buying their success, pointing to their weak schedule and the fact that they haven't won a game by more than 6. But couldn't you say that that simply means they know how to win close games? Is that something you could say? Like would you mind saying it out loud right now? Just see what happens. Oh shit, that guy's looking at you and he seems PISSED. Shut your computer and get the hell out of there! Run! No there's no time to do a proper shutdown, just shut the damn thing and move you nimrod! Ok phew, I think we're in the clear, you moved pretty fast, gotta say I'm kind of impressed. There's no way he could've kept uuhhhh NOPE HE FOLLOWED YOU HE'S RIGHT BEHIND YOU. Hey man I gotta go, good luck! 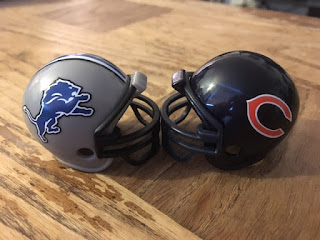 These are the bottom two teams in the NFC North, so ya know what that means ... It's a Basement Battle. Little known fact: whenever two cellar dwellers play each other they do so in the basement of the Pro Football Hall of Fame. Gullible viewers are easily fooled into thinking things are business as usual by the CGI stadium and crowd, but savvy fans will be on the lookout for players dodging unused busts as they make their way down the field. You see sometimes the Hall of Fame is so certain that a player will go on to a great career that they get a jump on things and create a bust for said prospect. Every so often this practice proves to be premature and the HOF tosses the bust's bust down in the basement. Last season in a Jags/Titans game Marcus Mariota narrowly avoided an injury when he barely dodged Neil O'Donnell's bronze head. 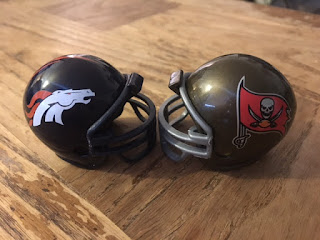 Trevor Siemian continues to impress as Denver's new quarterback. Meanwhile, last week against Los Angeles, Tampa's quarterback Jameis Winston ran 5 yards past the line of scrimmage on the game's final play before he finally stopped pump-faking and decided to tuck it and run. I've seen the downfield pump-fake work on occasion, but this was the last play of the game, and it's common knowledge that when the ball passes the line of scrimmage on the final play the sideline official javelin tosses his yard marker onto the field (behind the play for safety reasons), rips off his vest, and runs screaming from the field like it was the last day of school. So once the Rams defenders saw this they knew they had Winston right where they wanted him. Against Denver's defense one can only expect Winston to be even more confused. 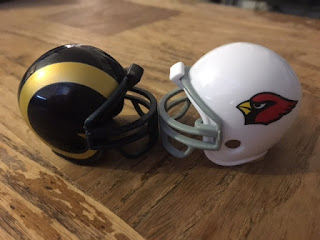 The Rams put up 37 points last week after amassing 9 total in their previous two games. How did they do it? I'm not sure. Why did they do it? I'm convinced it was just to fuck with me. Look, how am I supposed to pick scores when they don't make any sense? This isn't fair. I wish I could just quit. But I know I can't do that to you folks. Where else would you get weekly score predictions for every NFL game? Oh yeah, there are thousands of other options. Well whatever, I'm not going to stop because then the Rams of the world win, and that's something I just can't sit by and let happen. Also I bought this domain name for the next 10 years and I'm paying through the nose for it. Arizona should be desperate for a win, but hopefully not too desperate because then Chad will never call them back. 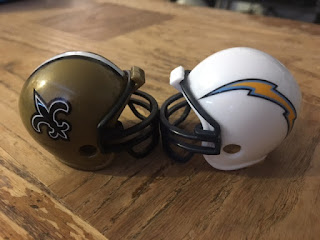 After their first two home games the Saints are giving up an average of 40 points inside the Superdome. Luckily for them this game is being played in San Diego, though in recent years Qualcomm has been flooded with opposing fans, making it seem like a home game for the visiting team. But if the Saints think they're playing at home they're libel to give up 40 points. They're in a tight spot. The obvious solution is to host a free pregame gumbo feed for all Saints fans in the parking lot. Of course, the gumbo will be mildly poisoned and send all those who ingest it straight to the porta-potty or possibly the hospital. Will there be fatalities? In a few extreme cases, yes. But it's a small price to pay to ensure that the team plays well. And really, if you're not willing to die for your team what kind of fan are you? Knowing the ineptitude of the Saints' front office though they probably won't do this and it will cost them the game. 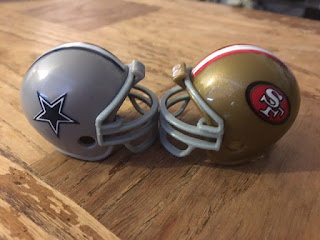 Dez Bryant has a hairline fracture in his right knee but was still hopeful that he'd be able to play this Sunday. I say he should've gone for it, what's the worst that could happen playing on a hairline fracture? I was going to link to the video Kevin Ware breaking his leg in the NCAA tournament but decided to spare you all. I am a benevolent soul. But my point was that they did discover that he was playing on a hairline fracture at the time, so the clip would've been relevant ... Maybe I should link to it ... How else will we learn if we do not use our past to teach us? Ok fine, I'll just link to this instead, and you can look up Ware on your own if you're interested. So anyway, long story short (too late), maybe sit these next couple out Dez, unless you want your bone sticking through your skin. And I assume you don't, unless you're some kind of weirdo. 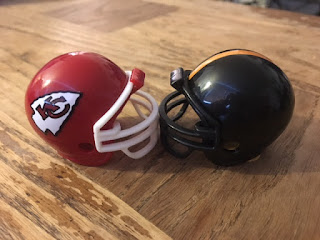 Take it away Cris: 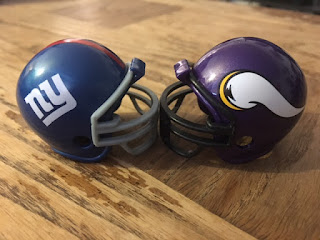 I was going to make fun of Odell Beckham, Jr and his sideline antics from last Sunday, but can I? Do I live in a glass house. No, that'd be totally impractical. Can you imagine how hot that would be? And it would be a death trap in an earthquake. Anyway, I myself am prone to the occasional tantrum during a rough game. I've never hit myself with a kicking net, but you can bet if I'd had access to one it probably would've happened by now. As for this game I think it's going to be a close one that ends when Eli throws a pick on the Giants' final drive. But at least this way Beckham will be able to go directly to the locker room afterward to smash equipment away from the camera's prying eye.