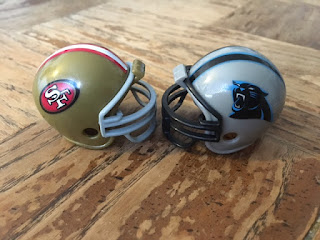 Taking into account the prevalence of the read option and deception in both the Panthers' game plan and Chip Kelly's new Niners offense I'm boldly predicting that this game will set an NFL record for most fake handoffs. The current record holder is the 1948 match-up between the (appropriately named) Boston Yanks and the Chicago Cardinals in which the Yanks were down to their fourth string running back Lenny "No Hands" McMillan, a man who literally had no hands. As a result, any and all handoff attempts to McMillan predictably wound up being fakes. The Cardinals wised up fairly early on and recorded 17 sacks on the day, but that didn't deter the Yanks from sticking to their game plan, leading to the still record 58 fake handoffs between both teams. But as I said before, San Francisco and Carolina have a legit chance to break that record on Sunday. If I were in the Fox graphics department I'd have a counter on the screen at all times keeping track. Will the geniuses over at the Fox Sports have the wherewithal to pull this off? Highly doubtful, but we can hope. 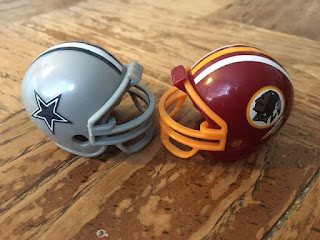 In this storied rivalry The Cowboys lead the all-time series 66-44-2. If I were Washington coach Jay Gruden I would vow that I wouldn't leave my job until that 22 game gap was closed and the series was even. This might sound like a bold declaration, but really it's just a sneaky move by Gruden to ensure job security. Each loss to Dallas would only add time to his future tenure. It's a brilliant strategy, which means it's probably beyond Jay Gruden. With all of one game of experience under their belts I believe Dallas's rookie backfield will do enough to get the road win.
Cowboys 21-20 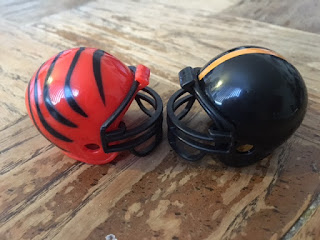 It's the match-up of the week! Says who? Says me. Also, says the intense rivalry between these teams. And says the playoff expectations for both squads. Enough saysed. The real question going into this one is how many Bengals will wind up suspended and/or fined for something they do on the field this Sunday? I'll guess four, with two of them resulting from a play in which Antonio Brown ducks a pair of Bengals defenders who then commit a helmet-to-helmet hit on each other. This one promises to be close ... you promised guys, don't let us down.
Steelers 29-26 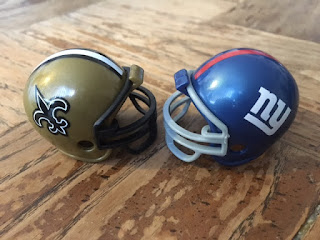 Last season's meeting between these two teams resulted in a 52-49 shootout in New Orleans, and now Brees and Manning meet in New York for a gunslinging rematch. This is exactly the kind of game that Obama and Crooked Hillary don't want you to see! They want to take away your guns and consequently your gunslingers. Can you imagine a world without gunslingers? Go ahead and think for a second of a world in which Brett Favre never existed. I'll tell ya right now, that's not someplace I'd want to live. God bless the NRA for fighting for our right to watch two high powered offenses go at it.
Giants 35-32 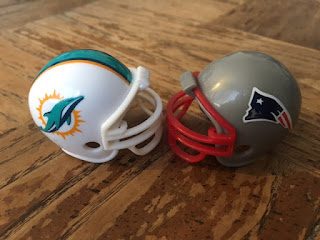 The Patriots won without Tom Brady and Rob Gronkowski last week begging the question: how did they cheat this time? There's no way that win was legit. I could smell the fishiness all the way in LA. Of course, I had quite a bit of leftover cod that I had to dump down the sink earlier in the day, and I do not have a garbage disposal, so that may have had something to do with the stench. Regardless, I'm sure that Belichick had something nefarious up his sleeve, and that this was involved.
Patriots 23-18 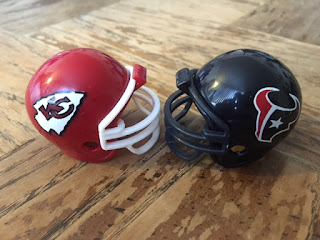 It's a rematch of January's Wild Card playoff game, and dare I say a possible playoff preview for this season? If so, that would make this the second in a trilogy. So what can we expect based on our knowledge of the second installments of film trilogies? Perhaps Alex Smith will find out it was Andy Reid who betrayed him to a rival, or maybe JJ Watt will be frozen in carbonite. I'm just excited for the third one when Brock Osweiler gets into jazz and dyes his hair black. It sure seems like the Chiefs have the Texans' number, and I'll make my pick accordingly.
Chiefs 24-20 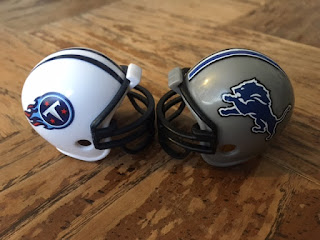 I told ya there would be a lot of points in that Detroit/Indy game didn't I? And what happened? Only the highest scoring game of the day. So maybe next time you'll listen to good ol' Mr. Pickman. Yes, I know I incorrectly said the Lions would lose. And ok, yes, I know I went 8-8 on the week. What, do you think you could've done better? Oh you think an ape picking at random could've done better? I'd like to see some research that backs up that opin... What do you mean you have an article? Let me see that! ... Gordie the football picking chimpanzee ... yada yada ... smears his feces by the team he thinks will win ... Oh this is ridiculous! Gordie clearly doesn't know anything about football! He probably just mindlessly stares at the screen every Sunday immobile and drooling for 7 hours at a time ... Hmm ... I'm smearing with Detroit!
Lions 30-22 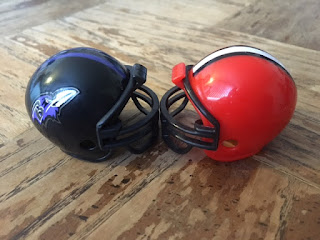 Oh boy. One week in and RG3 is already out. This is the most predictable thing since sliced bread. And I know that that saying doesn't seem like it works in this scenario, but back when bread came strictly in loaves there were a lot of folks predicting that it would eventually be sliced. Of course, they should have used that idea and just sliced the bread themselves, but that's not what us prognosticators do baby! Josh McCown now takes over as the Browns starter, which seems like no worse an option than Griffin, but then again, McCown is 2-17 over the last two seasons, so ...
Ravens 31-19 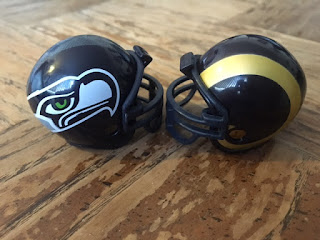 It's the first game in LA since December 24, 1994, when Dumb and Dumber ruled the box office, gas was free, and the kids were doing a new dance called the Osborn Shuffle. It was a simpler time, the crime rate was zero and no one locked their doors because they didn't have the option; doors simply didn't have locks back then. The Rams lost their opener last week 28-0 and just days later rumors began to surface that their coach Jeff Fisher would receive a contract extension. Heh, only in LA, right? If you tried to sell that as a Hollywood script they'd kick you out of the room. Not because it was too unbelievable but because it sounds like a lame movie that no one would watch.
Seahawks 20-6 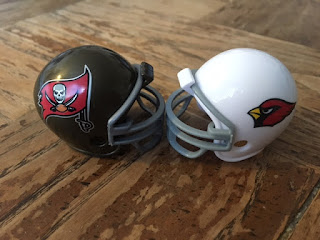 Is it possible that the Cardinals could start the season with consecutive home losses? Mathematically speaking, yes. Is it probable? Mathematically speaking, who knows? And you see, this is where math fails us as a society. You can draw up all the formulas you want in an attempt to tell us who will win a football game, but math can't tell you how fast a man can run or how high he can jump. It can't tell you how far a man can throw a ball or when and where it will land. Yes, math has brought us many wonderful things in the past: airplanes, pizza, 1984 by George Orwell, the list goes on. But at the end of the day math ain't gonna tell me who won a football game, those numbers on that scoreboard will. And once I look long enough at that scoreboard and determine which of the two numbers is higher I'll know deep down in my heart and soul who came out on top.
Cardinals 26-20 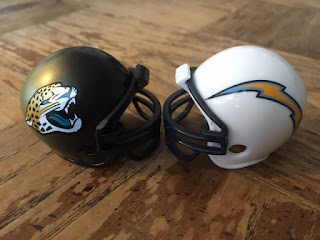 The Jaguars organization was quoted earlier in the week as saying that Chris Ivory was hospitalized with a "general illness." If Ivory ever embarks upon a hip hop career General Illness should be his rapper name. Not only because it sounds awesome but because I just copyrighted it, and if he makes money off of it I'm gonna be raking in the greenbacks. However, with that being said, can we trust that Ivory's hospital stay and "general illness" are above board? Who's to say that the Chris Ivory who went in to the hospital is the same Chris Ivory that came out? I'm not positing that it's a different person altogether, but it's highly likely that he was surgically altered, possibly with Wolverine style body enhancements that will make him an unstoppable force in the Jacksonville backfield. Consequently I have to go with the Jags here.
Jaguars 31-23 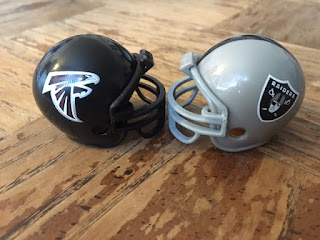 In response to ESPN stats & info tweeting a statistical counter argument to Jack Del Rio's decision to go for what would prove to be the game winning 2 point conversion the Raiders coach said "It's a good thing ESPN doesn't coach the Raiders." But what if ESPN did coach the Raiders? Tim Tebow would immediately be signed to play starting QB and instructed to personally deflate footballs in a bathroom before every game. Also they'd purposefully let teams make miraculous comebacks and try as many trick plays as possible. Actually, I'm talking myself into this; out with Jack in with Czarniak!
Raiders 33-25 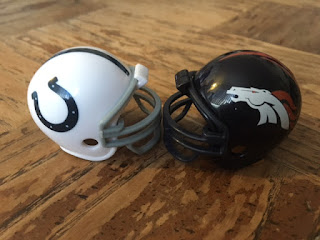 I'm predicting that all available QBs for both teams will be injured, forcing the NFL's designated survivor Peyton Manning to play all-time quarterback; his dream come true. Unfortunately he's not what he used to be and he'll end the game with 1 TD and 7 INTs.
Broncos 23-20 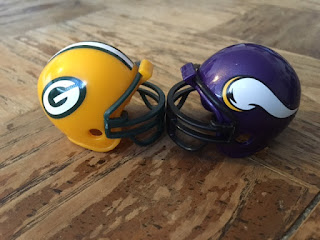 Let's turn it over to the best color man in the game: 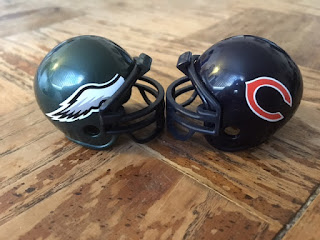 After his sterling Week 1 debut against the Browns, Eagles' rookie quarterback Carson Wentz told reporters that his critics can go back from Wentz they came. He was then asked if he knew that his name and the word "whence" are not spelled the same. He said yes, but you could tell he was lying. However, a second reporter then chimed in to defend Wentz saying that the different spellings do not negatively affect the pun, and in fact, they may even heighten it. To which Wentz said, "Exactly!" while gesturing toward the initial reporter. But again, you could tell from the look on Wentz's face that he hadn't thought of that. Because that impressive Week 1 performance was against Cleveland, I'll wait until next week before I jump on the Wentz bandwagon, at whence point it may already be full.
Bears 27-21
Posted by Erik at 1:59 AM