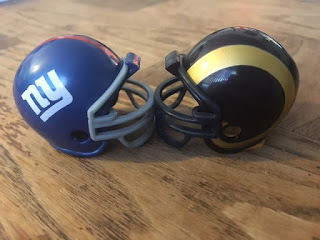 New York vs LA, the classic East Coast/West Coast battle, so it only makes sense hat it should be played in ... London? Not only that, but the game is kicking off at 6:30am Pacific time, which doesn't seem fair for the Rams' rabid? No ... Passionate? No ... Newly existent LA fan base. For those of us who do wake up in time to catch some of this game we'll probably see Odell Beckham, Jr. continue his ongoing bits with the kicking net that are only funny to him at this point. Though if he brings out a veil for the net and puts on a tuxedo dickie for a mock wedding I'll have to give him credit. After that though he'll only have one logical place to go with it, and it will be the sight of Beckham consummating his marriage to the kicking net that will finally end the NFL's relationship with London.
Rams 27-22 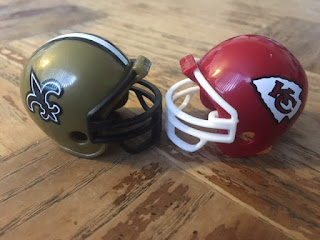 When I picked the Chiefs to lose a close game last week I forgot that they were coming off a bye week and that Andy Reid is nearly unstoppable when he's had a week off. It makes sense, Reid seems like a guy that really enjoys vacation. Can't you just imagine him by a beach with a Hawaiian shirt on sippin' a cool, tropical drink out of a coconut as a single bead of sweat trickles down his forehead; he considers brushing it away but then thinks to himself, "Hey, why sweat it?" He lets out a slight chuckle and considers telling his wife, but then decides against it, she'd just offer a courtesy laugh that is actually more insulting than if she'd done nothing at all, and he suspects she knows that, which is probably why she does it. This vacation was supposed to fix everything but instead it's just magnifying it. "Speaking of magnifying I feel like a goddamn ant with a sadistic kid roasting me on the sidewalk out here," Andy thinks. Maybe he should take his shirt off? Sure it would be embarrassing, but his wife would be even more embarrassed, and that would make it worthwhile. Anyway, can't you just imagine that? Maybe it's just me. The Chiefs may be rounding into form and I think we'll see them slow down the Saints' potentially potent offense.
Chiefs 30-19 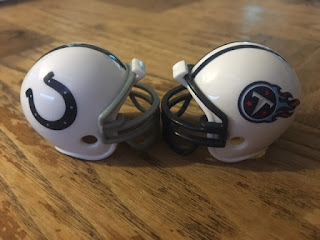 Yuck, another AFC South game between two losing teams ... wait the Titans are 3-3? When did this happen? I'm not going to blame myself for being surprised since their consecutive wins have come against the Dolphins and Browns in games that I legitimately don't thing I've seen one snap of. Now you might say that that seems unprofessional of me, to which I would counter: good, I'm not getting paid for this (and I'm not very accurate) so I don't have to act like a professional. Speaking of not acting like a professional, most of the Colts suck, so I'll pick the hot(?) team.
Titans 28-20 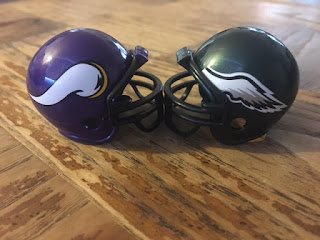 It's Minny vs. Philly. Do you think somewhere on Sunday there will be two old ladies watching this game together named Minny and Philly? Yeah, me neither. That was a dumb idea, right? Ha haaaaa ... God I want for it to happen so badly! But Minny is an Eagles fan and Philly is a Vikings fan! Can you imagine it?!? Carson Wentz has been solid all year, but this will be the first top 10 defense he's faced, and I think it will give Wentz ... fits. Wait, that doesn't rhyme. Shit.
Vikings 19-13 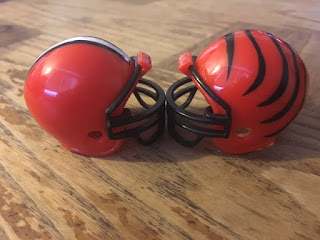 Look, we've all had a fun time goofing on the Browns this season, but I gotta admit, I don't think they're actually the worst team in the league. Sure they have the worst record, but look at their point differential ... Second worst! Ok so yeah, they're bad, but at some point they're going to win a game; maybe not today, maybe not tomorrow but someday (and that day will be next Sunday, 10/30 when they play the Jets).
Bengals 27-17 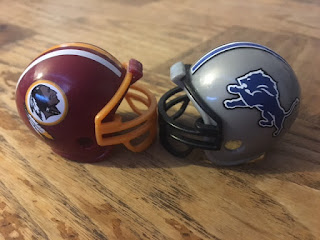 Last week the Lions held a halftime ceremony to celebrate the 25th anniversary of their 1991 team. You're probably assuming that that team won the Super Bowl or at least went to it, right? No, in fact, Detroit has never been to a Super Bowl. Those 1991 honorees won the Central division and lost in the NFC title game. Probably the main reason they were celebrated in such a fashion is that they represent the closest a Lions team has ever been to the Super Bowl. That begs the question, should this really have been a celebration? I feel like if I were a Detroit fan in attendance I would have finished applauding the '91 squad and then just broke down in tears. It was a savvy move though from the Lions PR staff to not hold said celebration this week when they're playing the franchise that beat them 41-10 in that aforementioned NFC title game. Again, the team that was honored lost the NFC title game 41-10. The fact that this game is being played in Detroit makes it a toss up for me. I'm going to take the Lions if for nothing more than I don't think Washington is good enough to have a 5-2 record.
Lions 27-24 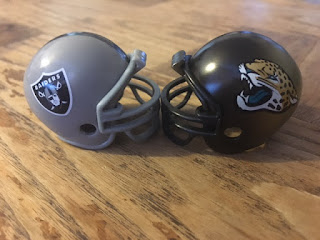 This game feels like an Intercontinental Title match between two young up and comers where you know both guys are going places in the future. Then again, I'm not totally sure about the Jaguars yet, so maybe they're the Marty Jannetty to the Raiders' Shawn Michaels. You guys watched early '90s WWF right? I don't have to explain any of this to you? Good. Oakland stumbled last week but now they go back on the road where they're undefeated this season. Look for them to keep it going and take the IC title on to Survivor Series.
Raiders 30-28 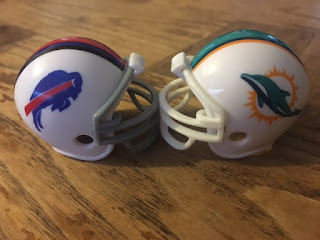 After scuffling to an 0-2 start the Bills are now 4-2 on the year, which begs the question: Is Buffalo good? My answer is a resounding "Yeah probably." Did you know that they have the largest point differential in the league right now? If you said yes I'm just going to assume that you're lying, so I'm not even sure why I asked. They should get another win this Sunday even without LeSean McCoy or Tom Brady. McCoy's absence should be the only one that impacts this game though considering that Brady never plays for the Bills.
Bills 24-17 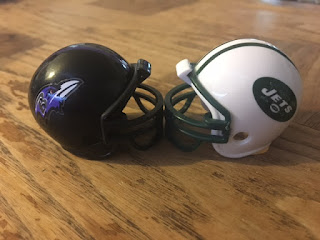 As I said earlier I'm not totally sure that the Browns are the worst team in the league, regardless of the fact they're the only winless squad left. So who's worse? The Jets, that's who. Of course they could easily jump up and get the Ravens this week because this league rarely makes sense. But when we're dealing with Ryan Fitzpatrick I feel like we can safely say that ... What's that? Geno Smith is starting at QB? Trying to figure out if that's any better ... Probably not.
Ravens 29-21 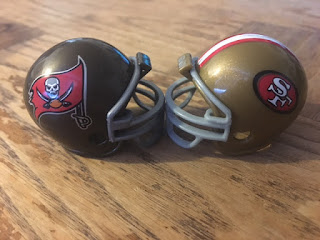 Colin Kaepernick returned to the field last Sunday, and it was everything we thought it would be. Which means that there were some flashes of excitement but ultimately he ended up completing less than half his passes and the Niners took the loss. The Bucs also had a predictable week, going on a bye just as I and many other pundits prognosticated. I can usually nail when a time will go on their bye within a week or two. Something else that's very predictable is the Niners run D; it's consistently awful. People haven't had this much success rushing on San Francisco since the prospectors that the team is named for. I expect this trend to continue and Tampa's running game to find gold ... GOLD!
Buccaneers 33-23 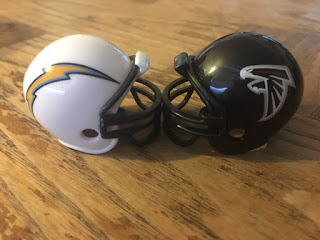 Watching the Chargers nearly blow another game in truly ridiculous fashion last Thursday was quite the unique experience. During that fourth quarter was the first time I could ever remember fully expecting a team to recover their own onside kick. And when the Broncos successfully did so I don't think anybody was shocked. That's the special thing about the 2016 San Diego Chargers, they make the impossible possible. They do it through spectacular failures, but hey they're still spectacular. San Diego faces a tough test this week in the 4-2 Falcons, though I think Atlanta's last game exposed their fatal flaw: Julio Jones is not very good at catching balls with one hand. Take away one or both of his arms and you can make some hay against these guys. However, I'm not sure San Diego has a defense capable of executing such a complex scheme, so I'll go with Atlanta here. It'll be close though, because of course it will.
Falcons 31-28 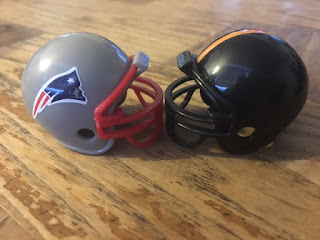 I was all set to anoint this game a Triple P (Possible Playoff Preview), in fact in the preseason I predicted it would be the AFC title game, but now Ben Roethlisberger is out for at least 4 weeks and we have to reconsider everything. More specifically everything regarding the Steelers, not everything. Don't make any life changing decisions because Landry Jones will be starting for Pittsburgh for a month or so. The only thing working in the Steelers' favor here is that Bill Belichick seems obsessed with his hatred for the NFL mandated Microsoft tablets. He recently spent five minutes expounding on his distaste for the device. It's possible that he'll become so frustrated with his tablet on the sideline this Sunday that he decides to go with a desktop computer to get the job done. However, it will take well into the 3rd quarter to actually set it up, distracting Belichick from the real task at hand. Even with their coach busy setting up his Norton's account and choosing his default internet browser New England should get the win in this one.
Patriots 30-16 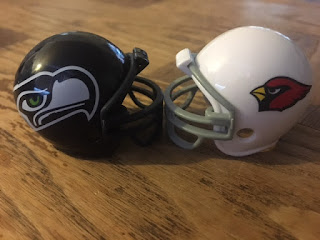 Obviously I'll seem biased regarding this game, so let's get some fair and balanced analysis from the best in the biz Cris Collinsworth:
Hmm, couldn't help but notice that you didn't really make a definitive pick there CriColl. I guess it's up to me then.
Seahawks 23-16 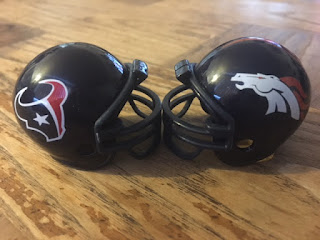 I'd just like to take a minute to address the Texans' 26-23 OT win from last Sunday strictly to point out that I predicted that they'd tie the Colts 26-26. It's probably best for you that I narrowly missed, because if I had correctly predicted a tie WITH the exact score I would've mentioned it every week in perpetuity. As is, I'll only bring it up this once (not at all a binding promise). After consecutive sluggish losses the Broncos no longer seem the imposing force that they were through the first month of the season. As for the Texans, well they've proven they can win at home (4-0) but have yet to prove anything on the road. Granted both of their away games to date have been tough match-ups (NE, MIN), but it's not as if this one is much easier. I'm sure some will be interested to see how Brock Osweiler performs in his return to Denver, but personally I won't be interested in another Houston game until 12/11 when they play at Indianapolis and I get another chance at that tie.
Broncos 20-13