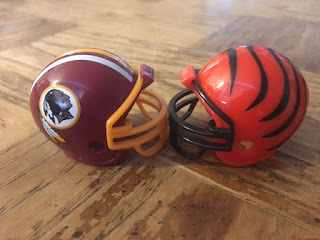 Jeremy Hill reemerged in Cincinnati's backfield to put up an astounding 18.7 yards per carry last week. By the way Yards Per Cary would be a great name for a landscaping company run by someone named Cary (or Carrie). We'll see what kind of yardage Hill can put up this week when the Bengals take on Washington in London. Although do they count as yards when you get them in England? Seriously I haven't thought about it until now but for the in-stadium scoreboard do they show stats in meters or yards? I mean they're close to the same thing, but close only counts in two instances, and neither of those are the metric system. This game is equally as confounding as this measurement issue, but I'll go with the home team (yes I know it's in London, but their logo will be at midfield, and that's mostly what a home field advantage is all about). 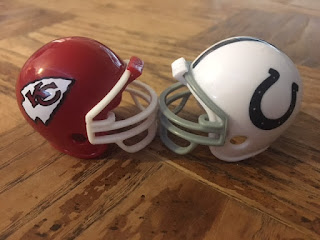 The Chiefs are rounding into form. They now sit at 4-2 and are right in the thick of things in the AFC West. Andy Reid must be thrilled. At least with his team's play on the field; home life is another story. Halloween's just around the corner and of course his wife is going to dust off the pumpkin costume and make him wear it while handing out candy to the greedy little snots in the neighborhood. Does she have any idea how demeaning that is? Making a man his size dress up like a big round pumpkin. He's an NFL coach for God's sake! He's a well respected man everywhere he goes except for inside the four walls where he should command the most reverence. Though that's impossible when his "partner" is constantly undermining him. Maybe he'll just get drunk this year. That'd ruffle her feathers. How's she gonna like it when a giant pumpkin spills his guts all over the front porch? Ah who's he kidding, he'd just be the one that would have to clean it up. Ugh, why couldn't Halloween have just been on a Sunday? Fuck you leap year. 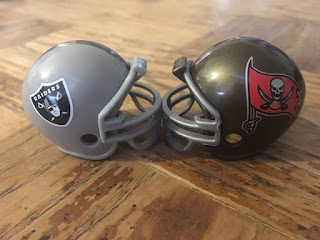 The Raiders have proven themselves to be road warriors this season, which is appropriate because you'll see plenty of Oakland fans sporting these shoulder pads. Unfortunately for the Raiders this is their last road game untilllll, let me just check here ... December 8th ... Huh?!? This is real, following this game the Raiders play four straight at home and have a bye over the next five weeks. It's like the schedule maker created schedules for 31 teams, brushed off his hands, kicked back, and fell asleep. When he woke up he realized he'd forgotten about Oakland so he just had to shoehorn them in because the deadline was in an hour. Of course you're going to say, "Ya know the whole schedule is done by computers now." Ok, well then what I just described happened to the man inside the computer. No I don't know how computers work. How did we get here? This is stupid, let's move on. I have to stick with the Raiders on the road until they prove me wrong, because that's the trick to picking games: always be a week late! 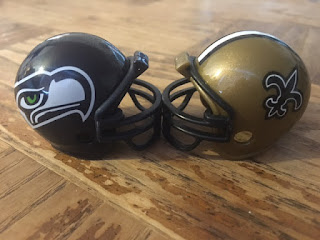 Russell Wilson has 5 passing TDs on the season through the first 6 games. As opposed to the 21 TDs he threw over the final six contests last season. So what's wrong? Maybe it's the fact that he's been hobbled by injuries or that his offensive line sucks. Actually there's no "maybe" about it, those are the reasons. Still he's been effective against lousy defenses, which isn't a shock, but is worth pointing out since that's exactly what he's up against this week. Although, if you look at the stats the Saints has given up 9 passing TDs, which ranks around the middle of the league, whereas they've surrendered 11 scores on the ground, good for most in the NFL. So maybe this is another week in which Wilson let's the run game get the glory in the red zone. Assuming there is some glory in the red zone. It would be nice to see some touchdowns. Please? 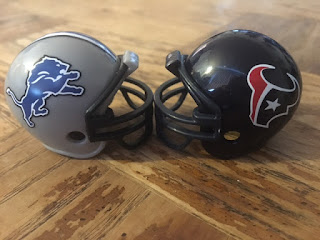 There is no team in the league who has a greater dichotomy between their home and road performance than the Texans. They're 4-0 in Houston and 0-3 elsewhere, with all of their losses being by at least 18 points. They remind me of when I used to be afraid to spend the night at any of my friends' houses. Every time I was away from home I was off my game, whether it be my performance in Nintendo, hide and go seek, or just general goofing. But eventually I grew up and got back to slammin' sodas, munching 'za, and playing high level Tecmo Super Bowl. The Texans need to do the same thing if they want to reach a real Super Bowl, Tecmo or otherwise. Unfortunately for them Brock Osweiler still looks like a frightened child any time he's away from home, so don't expect much postseason success considering they'd most likely have to win a couple games on the road come late January. In fact, I've heard (from no sources whatsoever) that he's been wetting his own bed now, so even a home game probably won't get him on track. I'm going with Detroit. 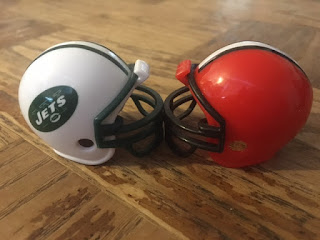 Well here it is, I said it last week, this would be the first (and possibly only) game the Browns will win all year. Then the Jets got a win over the Ravens, and the Browns were forced to play yet another quarterback in their loss to Cincinnati. It's gotten so bad for Cleveland that they just signed a QB named Joe Callahan, who I think is Tommy Boy's son, maybe? That movie did take place in Ohio ... Anyway I'm not backing down on my original prediction. In the same week that the Indians hosted their first ever World Series opener and the Cavs hoisted their first ever championship banner, the Browns will heist their first win of the season. Which I guess means they'll steal it in a close one. Look it just worked so well within the sentence that I had to do it, I'm not sure if that's what will actually happen. Though when a team is trotting out Kevin Hogan and Joe Callahan as their QBs anything but a close win would be downright crazy. Crazy like a Brown (fox jumping over a lazy dog). 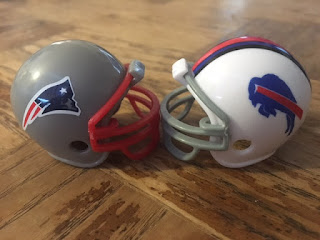 If this game feels like it just happened that's because these teams played only four weeks ago, and because you've been in a coma for the last 23 days. Welcome back! I have some terrible news though, Billy Bush is no longer on the Today Show. Yes it's only been about a month but it's a different world we now live in. Much has changed for these two teams as well. Tom Brady is once again the Patriots' starting quarterback and the Bills are a confusing, inconsistent team. Ok, so nothing's changed for Buffalo. Does anything ever change in Buffalo though? Am I right? Seriously, am I? I've never been to Buffalo. 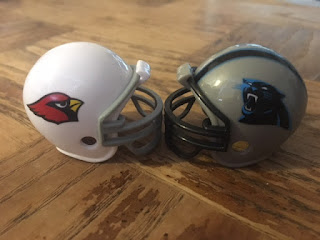 Has the Panthers' D sucked this season? Yes, out loud. If you put your ear up close to whatever you're reading this on you just might be able to hear them now. Does it seem like there are nothing but bad vibes surrounding this team? Yes, the Super Bowl hangover is real, especially if you don't drink (or lose) a ton and you're immature about it when you do (COUGH ... COUGH). So why do I get the sneaking suspicion that they're going to win this game? It's solely because of the Cardinals' previous contest. Make all the jokes you want about the 6-6 tie, and there are plenty available, but you could tell it was a physically and emotionally draining game. Now, after playing an extra quarter in a night game, the Cardinals have to travel cross country and play at 10am on the road. Sure the Seahawks have to do the same thing, but Arizona needed that game more, and their coach seems to have let it affect him more, complaining that leaping rules during kicks should be changed because they didn't work out for his team last week. This is the same guy who petitioned the NFL to let him wear a Kangol cap on the sideline though, so it won't be too shocking if the league doesn't take him seriously. 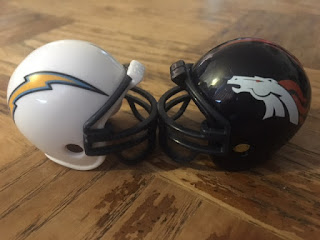 Remember that coma guy I was talking to earlier? He missed the last time these teams played because it was only two weeks ago! Why not just let them play back to back weeks? They could play it off like a rematch and interview Philip Rivers and Von Miller at midfield after the first game to hype it up. Miller could say something along the lines of, "You have enough kids to make it clear that you never worry about protection, but you better next week, because we're coming for you." Has that joke been made before? Probably. On this site? Maybe. I honestly can't remember, but I have to imagine the rematch gimmick would add some juice to this match-up. If the Chargers lose this week and still plan on making the playoffs they'll have quite the hill to climb, which would most likely be very difficult in shoulder pads. I think they surprise the defending champs and get the season sweep. 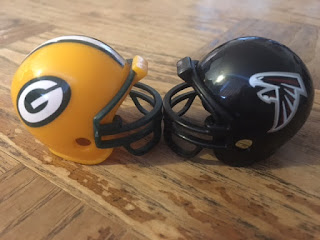 This one promises to be a shootout. The Packers' offense hasn't looked as explosive as in the past, but only once so far this season has Atlanta held a team below 26 points, and they've put up at least 23 in every game. So yeah there should be plenty of fireworks in this one. And I don't mean snakes or Roman candles, we're talking about the stuff they keep below the shelf. The kind of stuff that you can only see after assuring the salesman that you're not a cop. And you have to tell them if you are, that's the law. 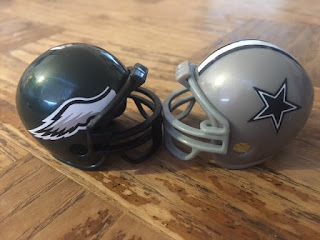 It's a Sunday Night game featuring the Cowboys and Tony Romo has yet to return from injury, which means Cris Collinsworth will most likely have a strong opinion on it:
I'm not sure if he's trying to convince us or himself. Either way I'll take his advice on this game. 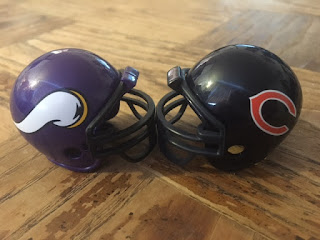 It's a spoooooky Halloween night match-up between the Vikings and the Bears. Who will walk out of this game alive? Minnesota's ghoulish group headlined by HorrorDarelle Splatterson and the running back duo of Scare-ick McSkinnin' and Bat I See Aaaahh(ta)? Or Chicago's bellicose brood with the returning quarterback Jay CUTler and running backs KaScream Scary and Jordan Howl-ard? Only the spirits know for certain! But probably the Vikings. Side note: if you have any Halloween themed NFL names that are even close to as good as the ones I just reeled off tweet them with the hashtag #NFLoween. That's right, it generated so much buzz last season that we're bringing it back!