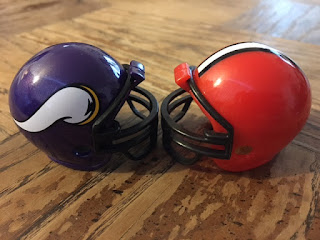 Sadly for DeShone Kizer his return to the role of Browns starting quarterback lasted just over one half as he was benched early in the third quarter in favor of Cody Kessler during last Sunday's overtime loss. It would be natural to assume that this second benching of Kizer would stick for a while, but then again, nothing should be assumed when dealing with the Browns. And so it was that DeShone Kizer has once again been named the starter for Sunday. This is a quarterback carousel upon which every other animal is DeShone Kizer. It makes very little sense that Cleveland would keep going back to a guy who now has 3 TDs and 11 INTs on the season. Unless, of course, the Browns are trying to lose games ... Oh ok, now I get it. If it's losses Cleveland wants the Vikings will be happy to oblige. 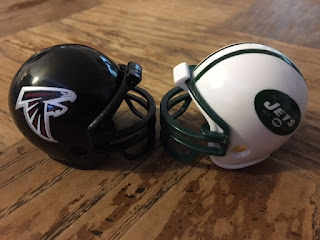 The thick fog that wafted into Gillette stadium last Sunday night was the perfect manifestation of the haze that the Atlanta offense has become enveloped in o'er the course of their last three contests. In fact, one could argue that it was perhaps even too obvious a metaphor, the likes of which, if found in literature, would surely emanate from the pen of a lesser scribe. Whomever is currently authoring the tale entitled The 2017 Atlanta Falcons has many a critic in Georgia's capital city, as these latest chapters have been nothing short of maddening. Can the Falcons flip the script in the shadow of Gotham this upcoming Sunday? I dunno, probably. Jets are pretty lame. 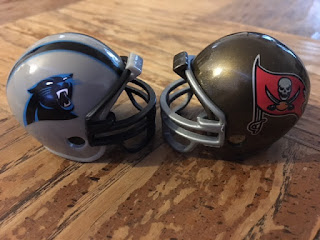 Cam Newton stormed out of his press conference on Wednesday due in large part to the fact that he is a petulant piece of shit. But enough about that, let's talk about the real juicy storyline heading into this game, which is the Panthers' signing of disgraced ex-Buccaneer kicker Roberto Aguayo. For now he's just on the practice squad, acting as insurance in case Carolina's regular starter Graham Gano can't go, but can you imagine if Aguayo does get the call on Sunday?!? And what if the game comes down to a long Carolina field goal attempt for the win? If I had to guess it would probably involve Aguayo stepping up for the kick, tripping over his own feet, falling face first toward the turf, and literally swallowing the ball whole. At that point the Tampa special teams will pick him up and carry him back into the end zone for a touchdown. Of course, the refs will have to review it to determine how to appropriately make a ruling on the play, but at that point it will be too late for the Panthers. 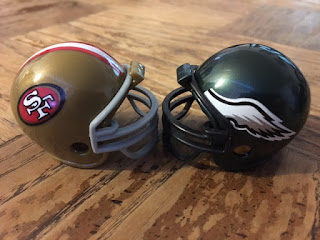 Last week the 49ers' streak of losses by three points or less ended at 5 when the Cowboys blew them out 40-10. I'm of the belief that one of the main reasons for this discrepancy in margin is that San Francisco gave C.J. Beathard his first start over Brian Hoyer. The Niners' should know by now that Hoyer is the master of doing just enough to not get embarrassed. If the San Fran brass is reconsidering their QB1 this week I like to imagine that Hoyer will emerge from the corner of the office smoking a cigarette, and in a gruff timber say, "Ya wanna lose by 3, or 30?" Then flick his cigarette and walk out of the room. Later that day it will be announced that the 49ers will be starting C.J. Beathard in Philadelphia, because they want to see what they have in the younger option, and also because Kyle Shanahan didn't appreciate having to get one of the chairs in his office reupholstered. 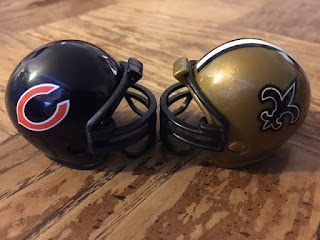 Let's take a look at Mitchell Trubisky's stats from the last two weeks:
8-16, 113yds, 1 TD
4-7, 107yds, 0 TD
His record in those games? 2-0! It seems impossible, but it's true. And again, those are actual stats from an NFL starting quarterback, not Navy's starting quarterback. But hey, it's somehow (again, I just don't get this) become a winning formula for Chicago. Can it continue to be so in the SuperDome this Sunday? My first thought would be no; as would my second. Third through ninth, also no. But then when I think about it for the tenth time, it's still a no. It takes me about twenty-four thoughts before I can envision Trubisky continuing this strange, mystical run. But hey, in the city of voodoo it's not impossible, in fact I'd give it about a 4.17% chance. 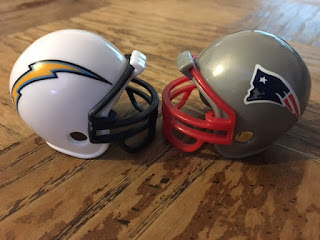 Ok, now that the Chargers won a game in the most demoralizing environment in the NFL, their own home stadium, we have to start taking them seriously. After an 0-4 start they've won their last three to climb within a game of .500 and into the muddled middle of the AFC. 25 years ago the San Diego Chargers (yes, they once played there) started 0-4 before finishing 11-5 and winning the AFC West. Could the anniversary of that magical team inspire This year's squad to accomplish a similar feat? Probably not. Most of these guys weren't even alive in 1992, so what do they care? Also they can only afford one more loss in that scenario, and after this Sunday that number will probably be zero. The number of losses they can afford, that is. You got it, right? I wanted the sentence to be snappy and succinct, but clear at the same time. Hopefully I accomplished that. The succinctness I mean; that's the most important thing to me, to be succinct. 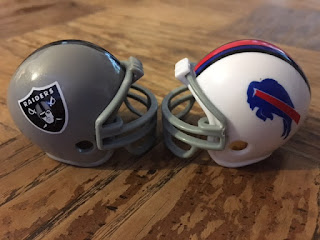 If you haven't already done so it's time to take notice of Buffalo, because this team is the real deal. In other words, these Bills aren't counterfeit. And with that line the ceiling above your head should have opened up to reveal balloons, streamers, and a trumpeter playing a jaunty tune. At least that's what better have happened because I paid way too much money setting it up. Please contact me if it didn't, I'll have some calls to make. The Raiders snapped a four-game losing streak last Thursday with what may have been a season-saving win. But now that they've saved it, they have to keep it alive, it's right there in the hippocratic oath. But Buffalo is a tough place to play, especially for a team making a cross-country trip. As a result, Oakland may be back on life support after Sunday. 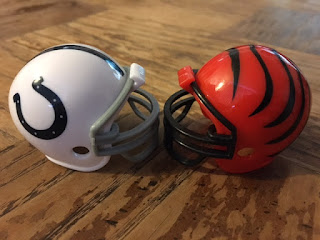 Alright c'mon, what are you doing here? We can just skip this one, right? Cool. Moving on ... Seriously? You actually want me to write something about this game? It's pointless! Ugh; fine. Let's see, uhh ... Colts/Bengals, what is this a football game or a malt liquor commercial with a tiger in it? Yuck. Happy now? Told you we should have just skipped it. 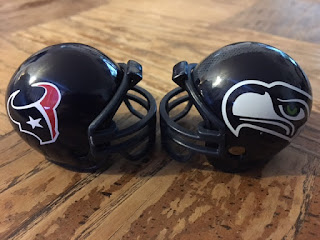 This is the first time the Texans have played in Seattle since 2005. That's twelve years ago to you and me. Back then Deshaun Watson was only 10 years old! And America was 229 years old! Of course now it's 241 years old, because as I said before, it's been twelve whole years. For a quick frame of reference, the last time the Texans played in Seattle the movie 12 Years a Slave was still eight years from being released. In case you forgot, 12 Years a Slave was released four years ago, in 2013. So if you simply add up the eight years and the four years before and since 12 Years a Slave was released you get 12 years since the Texans have played a game in Seattle. Hopefully that answers any questions you may have had regarding when these two teams last played each other in Seattle. I'll go with the Seahawks this week. 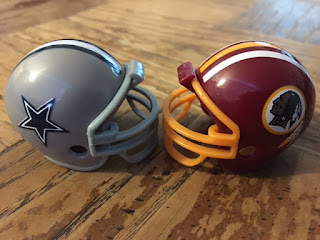 Folks, it's the game of the week! At least that's what you've been told relentlessly if you've seen any commercial break during the World Series. Look, I understand promoting your product, but if a match-up between two 3-3 teams is the "game of the week" then I'm a dictionary salesman. Although now that I scan through Sunday's slate again there aren't many marquee contests ... Hmm could it be true? Is this really the game of the week? What kind of world is this? What are we teaching our children?!? Well one of the teams playing in this game is called the Redskins, so I guess that question answers itself. I'm not totally sure what to make of this game, so I'll turn to my old friend ... the transitive property. These teams have two common opponents so far, the Rams and the Niners. Dallas is 1-1 with a +25 scoring differential against those two, while Washington is 2-0 but only has a +9 spread. I'm more confused now, thanks a lot TransProp. I guess I'll go with the points. 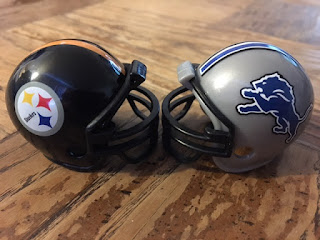 It's a Rustbelt rowdy-dow as the Steelers take on the Lions. Who will come out on top? Let's find out with some hard-hitting, topical analysis from the best in the biz Cris Collinsworth:

No can do CriColl. Sorry about that, but if it's any consolation I'll side with you on the pick. 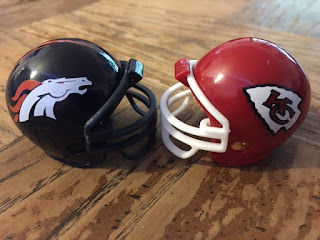 Just two weeks ago the Broncos and Chiefs were 3-1 and 5-0, respectively. They were on top of the world, cruising down the streets in limos popping champagne with tuxedos on. And that's not a metaphor, each team actually did that. 106 men (no practice squadders allowed) dressed to the nines and a fleet of limos. It seemed exorbitant at the time, and has proven to be hubristic since, as each team has lost their last two. But while Kansas City has suffered hard fought losses to the Steelers and Raiders, Denver has fallen by double digits to the Giants (New York's only win of the season) and been shut out by the Chargers. Taking that into account I have to believe that only Kansas City will be left in their black tie wear when this one ends. Oh did I not mention that they're actually playing this game in the tuxedos? Because that's happening.