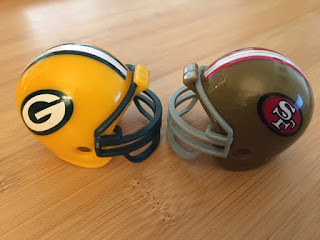 Here we have a rematch of last season’s NFC Championship game. You’re probably wondering: how do rematches of the previous season’s NFC Championship game normally go? I’m glad you asked, because I did the research, and over the last ten years the team that moved on to the Super Bowl has gone 10-2 in the ensuing contests. Great news for the 49ers! And they could use some considering they’re trotting out roughly 3 of the starters from last season’s game. That might make it sound like they have a daunting task ahead of them, but didn’t you see my stat? Teams in their position are 10-2 in games such as this. It’s as good done, San Fran wins! Unless, of course, that stat has no bearing on this particular match-up ... But that would mean I wasted 2 hours, I mean 20 minutes, doing that research ... And as you’ve probably surmised from the 371 of these posts I’ve made so far, I’m a man who hates to waste time. Still, I gotta admit, I don’t see the Niners getting the win here, recent history be damned! Seriously, we could do away with most of it.
Packers 30-16
Posted by Erik at 9:38 AM