After reporting (or stealing the report off another website) about the tragic failure of the holiday epic, "Delgo", I felt like I owed it to myself to watch this trainwreck myself. Or in the immortal words of one Mike Awesome: this was one party, I was NOT gonna miss!

Luckily, fellow HCMer Erik was also ready to party with Delgo. Here are the photos that document our journey (which was unfortunately on par with the level of excitement experienced in Delgo). 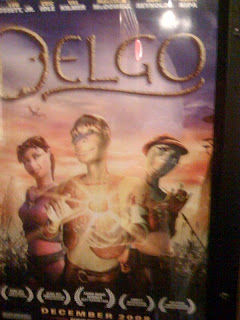 Here's the movie poster. Innocent enough. That's Delgo in the middle voiced by wrestling writer Freddie Prinze, Jr., with his love interest Jennifer Love Hewett on his right. Maybe they were banking on the I Know What You Did Last Summer fanbase to pack the theaters as a chance to see a reunion of sorts. I don't know. Oh, and that other character is Delgo's gay friend Filho, voiced by Chris Kattan. Quite a stretch. 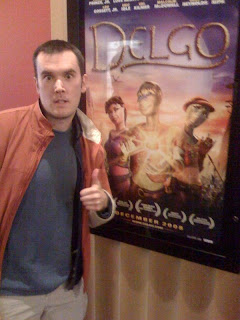 The stage was set for movie magic! And at least one patron was pretty jazzed to say the least! 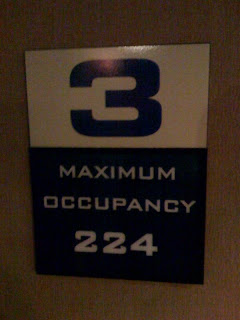 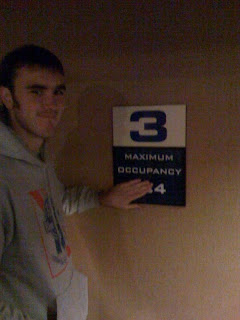 In actuality, the movie isn't THAT bad. It just isn't anywhere near good. I even chuckled two or three times. I'm sure there are kids out there who would enjoy this. Stupid kids. Looks like a marketing budget gone wrong (or missing).

Sorry, Delgo. At least you've been immortalized on HenryCottosMustache.com
So ya got that going for you... which is nice.

Wow. This thread on Delgo has generated about as much buzz as the actual movie.

I'm now re-thinking what we did. I think we made a mistake going to see the movie. Well, of course we did, because it was a waste of time and money, but those aren't the only reasons. We helped double the attendance in that theater. The original article said that ana average of two people were t each screening. This means that if, all over the country, two assholes like us decide it would be funny to see Delgo it will double the box office take from the first weekend.


By the way, visit the Delgo website for some exclusive behind the scenes footage. http://www.delgo.com/

Your over-thinking this. Stop being such a delgo.

If the animation seems a little dated, that's probably becuase it started production in 2001.

I'm trying to think of what animated CGI movies were coming out back then. Would this have even held up back then?

Nope. Toy Story came out in 1995 and blew this one away. I think Shrek had come out around '01 or maybe within the next couple of years, and it far surpasses this shit. Look, the job that the animators did could be described by saying that they simply Delgo'd it.

I'm strongly considering adding this to my "favorite movies" section in the profile.